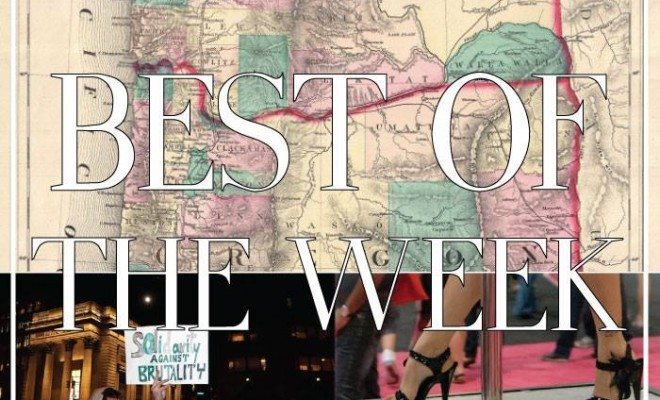 From bizarre laws to college admissions strippers, Law Street has you covered on everything you might have missed last week. Our number one story of the week came from Marisa Mostek who added the Pacific Northwest states to her series of the Dumbest Laws in the United States. Hint: hope you don’t want to buy a new mattress on a Sunday, because that’s out of the question. Anneliese Mahoney wrote the #2 post on Columbia University’s policy allowing students who have experienced trauma to petition for delayed exams, which became a hot topic in the context of the recent Ferguson and New York grand jury decisions. And Ashley Shaw had the #3 post of the week with a report on now-defunct FastTrain College’s admissions practices that will have you scratching your head and wondering how this happened in real life. ICYMI: check out Law Street’s Best of the Week.

#1 The Dumbest Laws in the United States: Pacific Northwest Edition

I was wrong a couple weeks ago when I said that California laws are crazy. Many of the Golden State’s laws that I mentioned now seem completely sane in comparison to those I’ve discovered in Washington and Oregon. For example, if you are trying to woo the opposite sex by saying your dad just won the lottery and drives a brand-new Lamborghini when in fact he doesn’t have a dime to his name, you better think again. In Washington state it is illegal to pretend that your parents are rich. Read full article here.

In light of the incredibly controversial and nation-sweeping announcements that grand juries in Missouri and New York failed to indict the cops who killed Michael Brown and Eric Garner, respectively, Columbia University Law School made an announcement. It regarded the reactions that some of the students may be having to those verdicts, and offered counseling, opportunities to talk to professors regarding the indictment. Read full article here.

#3 BS in Dancing: When Stripper Work Admissions, It Might be a Scam

With a name like FastTrain College, you probably expect a top-notch education system along the lines of Harvard or Yale; however, what you apparently get is a different type of top entirely. When FastTrain wants you (so basically if you are a man), it will send out its top admissions officer. And by top officer, I of course mean an exotic dancer dressed provocatively in an effort to lure you into the school. Read full article here.