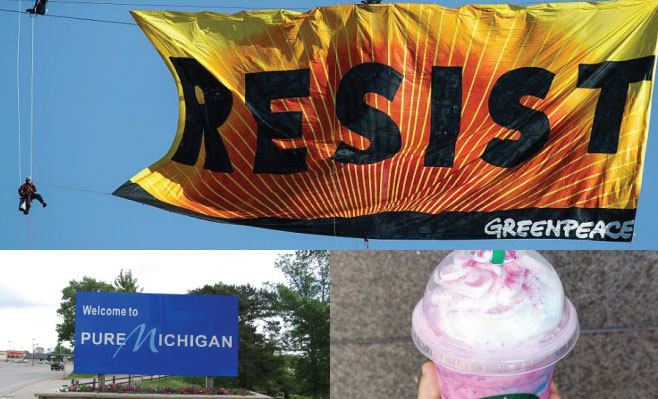 What does Greenpeace, Michigan marijuana, and Unicorn drink drama all have in common? They were some of our top stories last week. ICYMI, check out Law Street’s best of the week below!

Beyond Symbolic: Greenpeace in the Trump Era

In January, seven members of Greenpeace scaled a 270-foot crane at a construction site near the White House and unfurled a massive banner with the word “resist” printed in block letters. In April, Greenpeace members blocked the entrance to Coca-Cola’s UK headquarters with a 2.5 ton sculpture of a seagull regurgitating plastic and unfurled a banner reading “Stop Dirty Pipeline Deals!” on the center stage of Credit Suisse’s annual shareholder meeting. All of these Greenpeace interventions grabbed headlines but they did not shut down operations of the White House, Coca-Cola, or Credit Suisse. Greenpeace’s banners certainly entertain and uplift, but do they actually have an impact?

Michigan May Have a Marijuana Legalization Measure on the 2018 Ballot

Pro-marijuana groups in Michigan submitted language to the Board of State Canvassers on Friday for a ballot initiative to legalize recreational marijuana. If the measure makes it to the November 2018 ballot, Michigan would become the ninth state to fully legalize cannabis for adult use. Spearheaded by the Coalition to Regulate Marijuana Like Alcohol, the legalization push follows a failed attempt to get a similar measure on the November 2016 ballot.

Colloquially speaking, the term “unicorn” is often used to describe something that’s pretty unique. Well, that definitely wasn’t the case with Starbucks’ now-extinct “Unicorn Frappuccino,” according to a new lawsuit filed against the company. Williamsburg coffee shop The End Brooklyn is suing the green-strawed giant, claiming it ripped off its popular “Unicorn Latte” and created an unfair competitive advantage.

Alexis Evans
Alexis Evans is an Assistant Editor at Law Street and a Buckeye State native. She has a Bachelor’s Degree in Journalism and a minor in Business from Ohio University. Contact Alexis at aevans@LawStreetMedia.com.
Share:
Related ItemsBest of the WeekGreenpeaceICYMIMarijuanaStarbucks.MichiganUnicorn