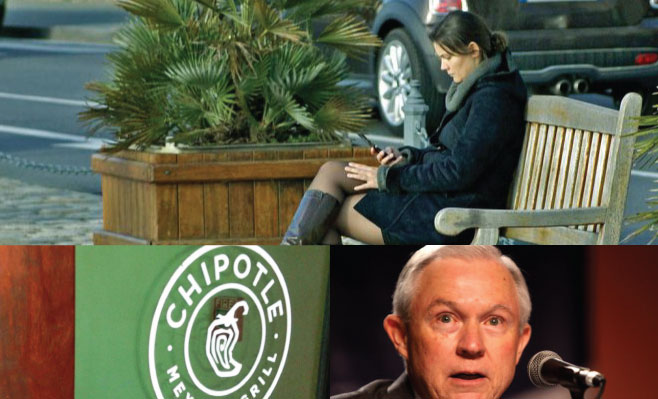 A California woman is suing the popular fast-casual burrito chain Chipotle, alleging that the company used a photo of her in its advertisements, but that she never gave it permission to do so. Leah Caldwell, the plaintiff, is asking for over $2 billion, specifically $2,237,633,000, arguing that the company has made that much money off of the use of her photo that was taken in 2006.

Senator Jeff Sessions (R-AL), President-elect Donald Trump’s nominee for attorney general, will face the Senate in a confirmation hearing on Tuesday. In an effort spearheaded by the National Organization for the Reform of Marijuana Laws (NORML), pro-marijuana groups are asking supporters to call their senators on Monday, and let them know that they will not stand for any aggressive enforcement actions taken by Sessions, who once said “good people don’t smoke marijuana.”