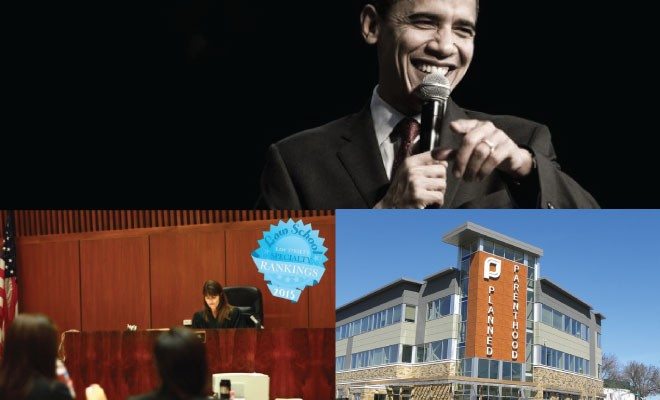 On Wednesday afternoon, Obama held a press conference in the White House East Room where he welcomed critics and reporters to ask questions of him regarding the newly struck nuclear deal. The conference lasted more than an hour, and drew out several candid responses from an increasingly condescending President Obama along with a slew of entertaining commentary by the president toward critics of the nuclear deal. Read full article here.

The legal industry is changing and law schools are no exception. Applications and enrollment are both down, and the value of the traditional legal education with its current price tag is the subject of continual debate. Law Street Specialty Rankings are a detailed resource for prospective law students as they consider the many law schools across the country. Law Street Specialty Rankings blend the quantitative and qualitative in a way that accurately highlights the top law schools based on specialty programs. This set of rankings deals with the best law schools for criminal law. See the full rankings here.

Planned Parenthood is an organization with a mission to promote a healthy sexual lifestyle and family planning. But recent news of a few controversial videos surfacing may be changing some people’s opinions toward the organization. In the more widely viewed video, Center for Medical Progress–an advocacy group that claims to report on medical ethics–had two undercover actors pose as representatives of a human biologics company and went to lunch with Deborah Nucatola, Planned Parenthood’s senior director of medical services. Nucatola was secretly recorded and what she said during the video has led to serious arguments about both the video’s validity and Planned Parenthood’s actions. Read full article here.

Anneliese Mahoney
Anneliese Mahoney is Managing Editor at Law Street and a Connecticut transplant to Washington D.C. She has a Bachelor’s degree in International Affairs from the George Washington University, and a passion for law, politics, and social issues. Contact Anneliese at amahoney@LawStreetMedia.com.
Share:
Related Items#1#23ICYMIIran DealLaw School RankingsObamaPlanned ParenthoodRankings