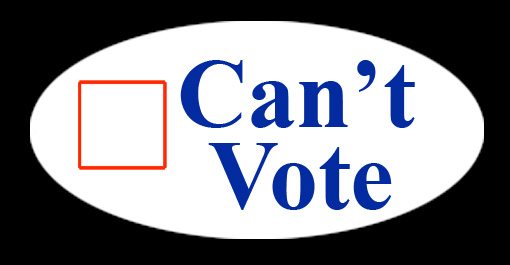 Attorney General Eric Holder shined a spotlight on state voting laws this week when he spoke out against voting bans for felons. The laws vary across states, with the harshest in Florida, Iowa, Kentucky, and Virginia where felons are banned from voting for life, with the exception of individual permissions granted by the governor. Other states require ex-convicts to abide by a waiting period prior to regaining the vote, and others still have long and complicated re-registration procedures. To prove the severity of these laws, Holder pointed to Florida where anti-felon suffrage regulations ban 10 percent of the citizens from voting.

While a significant portion of the country is barred from voting, even after they finish their time in prison, these laws also disproportionately affect minorities. African-Americans encompass a third of the approximately 5.8 million Americans who are barred from exercising their voting rights. Holder emphasized the large number of minorities affected by these restrictive laws, stating that they are remnants of the discriminatory policies enacted after the Civil War in order to keep minorities from going to the polls. And unfortunately their efforts were successful: 1 in 13 African-Americans are disenfranchised due to anti-felon voting bans.

Due to these, and other, restrictive policies, any attempt to protect minority voting rights is mportant, especially after key provisions of the Voting Rights Act of 1965 were declared unconstitutional in a 2013 Supreme Court Ruling. The decision deemed Section 4 unconstitutional, which determined states with histories of voting discrimination would have to submit any changes to their voting laws to be pre-approved by the Attorney General. Without the coverage formula, states are able to pass discriminatory voting laws and the federal government cannot prevent the laws from going into effect.

In this context, the Voting Rights Act’s power is minimized, and any legislation that could help restore some minority voting rights would be welcome. Senator Rand Paul is currently drafting a bill that, if passed by Congress, would give many felons the right to vote in federal elections. However, Paul’s bill still contains restrictions: the proposed legislation restores the vote specifically to non-violent felons, which is a compromise with other legislators who are hesitant to restore these rights in the first place.

Holder also noted that the laws preventing ex-convicts from voting only enhances the stereotype and social stigma surrounding felons. Laws affecting felons, such as these restrictive voting ban, increase the feeling of separation from the rest of the community and increase the likelihood that felons will commit further crimes. Treating ex-convicts as second-class citizens is neither the proper nor the most successful way to reintegrate them into their communities.

These laws teach others that there are no second chances in American justice: once a convict, always a convict. Some may think that this is a good message to send, and that such laws could dissuade citizens from committing crimes in the first place. However, this philosophy mistakenly precludes the possibility that once felons finish their time, they could serve some benefit to the community. If societal attitudes continue to influence felons to go back to jail, states miss out on the potential for these people’s efforts to contribute to the workforce and other communal needs. By getting rid of some of the restrictive laws on felons after they return to normal life, they can better return as contributing citizens.

While Mr. Holder has no authority to enact changes to the laws himself, congressmen and state legislatures should listen up.

Sarah Helden
Sarah Helden is a graduate of The George Washington University and a student at the London School of Economics. She was formerly an intern at Law Street Media. Contact Sarah at staff@LawStreetmedia.com.
Share:
Related ItemsCriminal JusticeDiscriminationFelonyLegalMinoritiesPrisonShelby v. HolderUnited StatesVoting RightsVoting Rights Act of 1965