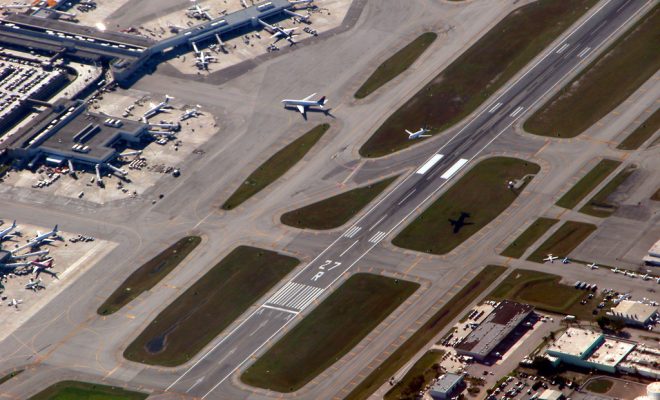 At least five people were killed and at least eight were injured when a gunman opened fire inside the Fort Lauderdale International Airport in Florida on Friday afternoon, the Broward Sheriff’s Office confirmed via Twitter.

Update: 5 ppl dead; 8 injured were taken to an area hospital.

The office said it got the initial 911 call around 12:55 p.m., and around 2 p.m., it tweeted that a suspect was taken into custody. But even after that, closer to 3 p.m., additional shots were heard inside the airport and the search for more perpetrators was ongoing.

Everyone evacuated off neighboring plane after reported shooting in baggage. We’re sitting on tarmac. Florida! pic.twitter.com/4h5kRTECso

Photos and videos shared on social media showed injured people bleeding and general confusion about what was going on.

Shots fired at FLL airport. Guy is bleeding profusely. Supposedly others are shot on the lower level at Delta Term 2. pic.twitter.com/UcL73Y8yGx

People started running across the tarmac as CNN tried to figure out what the current situation was.

Former White House Press Secretary Ari Fleischer was there during the shooting and reported via Twitter that no one was let out of the airport.

All seems calm now but the police aren’t letting anyone out of the airport – at least not the area where I am.

Andrea Ruiz is the daughter of an airport worker and told Buzzfeed News that her mother didn’t know what was going on and it seemed like the situation was not safe yet. “SWAT and police ran into parking garage in front of Terminal 2. My mother and coworkers are back in office hiding. No one knows what is happening…something else has happened,” she said.

According to CNN, the FBI and ATF are at the scene. MSNBC reported that the shooter in custody had been identified as Esteban Santiago, a man born in 1990 with a U.S. military ID. It is unclear whether the ID is genuine.

As of Friday afternoon, the situation is still ongoing and the story is developing.

Emma Von Zeipel
Emma Von Zeipel is a staff writer at Law Street Media. She is originally from one of the islands of Stockholm, Sweden. After working for Democratic Voice of Burma in Thailand, she ended up in New York City. She has a BA in journalism from Stockholm University and is passionate about human rights, good books, horses, and European chocolate. Contact Emma at EVonZeipel@LawStreetMedia.com.
Share:
Related ItemsAIrportAttackFloridaFort LauderdaleGunfireGunmanShooting