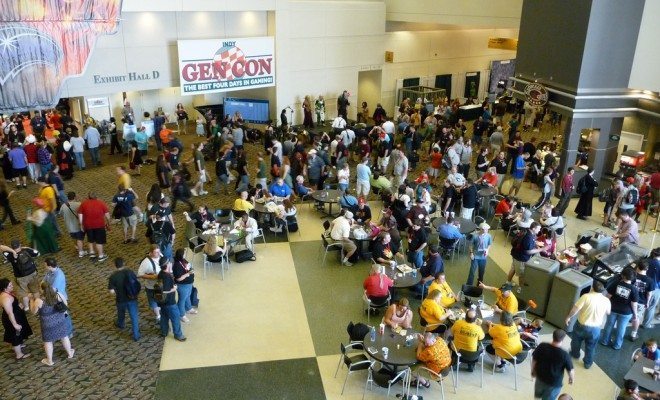 One of the world’s largest gaming conventions, Gen Con, is taking a stand against anti-gay legislation by threatening to take the expo elsewhere if Indiana’s governor signs a controversial religious freedom bill into law. Gen Con CEO and owner Adrian Swartout recently sent an open letter to Indiana Governor Mike Pence asking him to reconsider his support for Senate Bill 101.

The bill, which passed in the House of Representatives Monday with a 63-31 vote and the Senate on Tuesday with a 40-10 vote, will prohibit state and local governments from “substantially burdening someone’s religious beliefs.” In the letter Swartout writes:

Legislation that could allow for refusal of service or discrimination against our attendees will have a direct negative impact on the state’s economy, and will factor into our decision-making on hosting the convention in the state of Indiana in future years.

Supporters of the bill claim it is a safeguard against unnecessary government intrusion on individuals’ religious beliefs, while critics see the bill as sanctioning discrimination against LBGT people. That concern stems from the bill’s ability to protect business owners who don’t want to service same sex couples. House minority Leader Scott Pelath, D-Michigan City, who voted no to the bill, shared his opinion with the Indianapolis Star:

It basically says to a group of people you’re second rate, you don’t matter, and if you walk into my store, I don’t have to serve you.

Gen Con, which boasts of being the “original, longest-running and best-attended gaming convention” in the world, provides a substantial economic benefit to the city of Indianapolis, bringing more than $50 million dollars worth of revenue to the city each year. Despite being under contract to host the event in Indianapolis through 2020, the organization hopes to sway the governor by leveraging its economic importance and future business.

As of now Gen Con’s disapproval appears to not have weakened Governor Pence’s resolve to sign the bill. His spokeswoman Kara Brooks responded to the letter telling the Indianapolis Star that “the governor has been clear on where he stands on this issue and we don’t have anything to add at this time.”

If Governor Pence follows through with the bill amidst public outrage and big business disapproval, he will be making a statement that both the city’s economy and the rights of his LGBT constituents bear no importance when it comes protecting so-called “religious freedom.”

Alexis Evans
Alexis Evans is an Assistant Editor at Law Street and a Buckeye State native. She has a Bachelor’s Degree in Journalism and a minor in Business from Ohio University. Contact Alexis at aevans@LawStreetMedia.com.
Share:
Related ItemsConventionGaming ConventionGen ConGovernor Mike PenceIndianaLGBTLGBT DiscriminationReligious Freedom BillSenate Bill 101