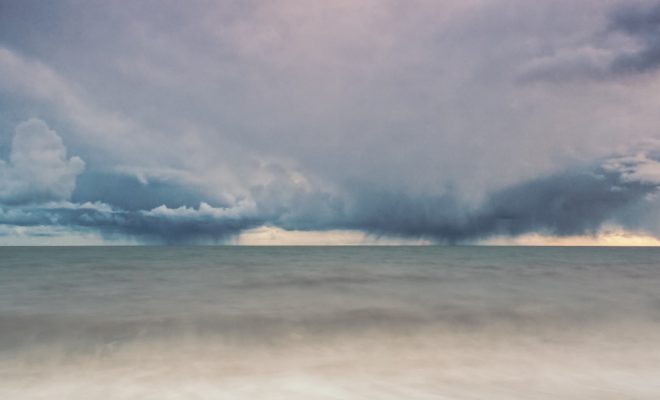 "A tale of two storms" courtesy of [sagesolar via Flickr]

Florida Governor Orders Evacuation: “This Storm Will Kill You”

On Thursday afternoon, certain states began to feel the impact of the storm that has already claimed 108 lives in Haiti. President Obama declared a state of emergency in Florida as Hurricane Matthew started approaching the coast. This measure allows the Federal Emergency Management Agency (FEMA) to start working on coordinating disaster relief and releases federal funding for that purpose.

As some people planned on keeping their businesses open or even having a “hurricane party,” Florida Governor Rick Scott ordered 1.5 million residents to seek safety. With the chilling words “You need to leave. Evacuate, evacuate, evacuate […] this storm will kill you,” he made sure people know this is no laughing matter.

Florida Gov. Rick Scott: “Do not surf. Do not go on the beach. This will kill you.” https://t.co/5kRoLafLlr pic.twitter.com/sc1fj1WGdL

One man told NPR he was going to wait out the hurricane in his RV less than a mile from the beach. “The hype is going to be worse than the actual storm. I feel I can do quite well,” he said.

But that doesn’t sound like a very good idea. According to the National Hurricane Center the storm is increasing in strength as it moves toward the U.S. It is now a Category 4 storm. By Thursday morning, 3,000 people were already in shelters in Florida. Disney World will close by 5PM on Thursday and stay closed on Friday.

At the same time in Georgia, Governor Nathan Deal ordered the first evacuation in 17 years, which will affect 500,000 people. The Georgia coast has not been hit with a major hurricane since 1898, which is why extra safety measures may be a good idea. The lanes of some interstates are being reversed so that traffic can only move west. South Carolina has also ordered around 1.1 million people to leave. As natural disasters can create panic and confusion, a fight about evacuation routes in South Carolina resulted in gunfire between police and a driver on Wednesday night, leaving the driver injured.

Haiti was dramatically hit by the hurricane, leaving 108 dead and 300,000 people in shelters across the country. This is the worst crisis for the country since it experienced a massive earthquake six years ago.

No one knows how hard the hurricane is going to hit the U.S. coast or if it will even move in over land at all. But it could potentially get really bad. Researcher Brian McNoldy told the AP:

In some ways, the worst-case scenario would be if the storm’s eye stays just offshore, enabling it to feed over water and avoid weakening while its strongest hurricane winds keep smacking the beaches.

Hopefully people will listen to the evacuation orders and stay out of the way of the worst of the storm.

Emma Von Zeipel
Emma Von Zeipel is a staff writer at Law Street Media. She is originally from one of the islands of Stockholm, Sweden. After working for Democratic Voice of Burma in Thailand, she ended up in New York City. She has a BA in journalism from Stockholm University and is passionate about human rights, good books, horses, and European chocolate. Contact Emma at EVonZeipel@LawStreetMedia.com.
Share:
Related ItemsEvacuationFloridaGeorgiaGovernor Rick ScottHaitiHurricaneHurricane MatthewNatural DisasterObamaSouth CarolinaState of Emergency