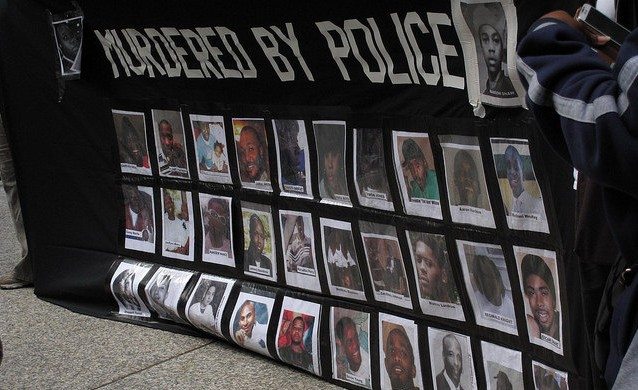 It looks like a toy, resembling a large ping pong ball, but this bright orange device is actually the newest “less lethal” ammunition option for police in pressure situations. Developed by a company out of California called Alternative Ballistics, The Alternative is marketed as an easily accessible attachment for police officers to use that doesn’t actually penetrate its target, only stalls it.

This week, five Ferguson, Missouri police officers will begin to train using the device, with the department planning to introduce it to its entire force of 55 officers.

This “less lethal” option would allow police in situations where lethal force is already presumably justified to cause their target serious pain with less internal injury. In seconds the device can be mounted on the top of the gun without any obstruction to the sight of its operator. According to the company’s website:

Once the weapon is fired, the bullet embeds itself inside the projectile with no chance of escaping, simultaneously transferring the bullet’s energy, propelling it directly at the target. Once the bullet is fired from the gun into the projectile they permanently become one unit. The docking unit will automatically eject from the weapon and the firearm returns to its normal function before it cycles in a new round.

Since the gun returns to its normal functionality after the one-time round is released, officers can still use their weapons for lethal force if necessary.

You can watch a video of The Alternative in action below.

The main point of The Alternative is that it gives its user a choice. A choice that may have come in handy in the controversial shooting of Michael Brown, an unarmed black teenager who was fatally shot by a white police officer. Brown is just one of several victims who has thrust American police procedures under a microscope.This is likely the reason why the Ferguson Police Department is the first in the U.S. to test the $45-per-unit device.

According to the Washington Post, Al Eickhoff, assistant chief of the Ferguson police, had begun researching less lethal options about a month after Brown’s fatal shooting by now-former Ferguson Officer Darren Wilson on August 9, 2014.

But is this a viable option? Those seconds it takes for an officer to pull the device out from a side holster and place it on the barrel of a gun could be life threatening. Steve Ijames, a former Springfield, Missouri police major and training expert thinks that may be the case, telling the Post:

I am all about less lethal. What bothers me is we will allow an officer to face immediate deadly jeopardy with a less-lethal round. Deadly force is the most likely thing to repel deadly force.

The Alternative is hardly the only non-lethal option on the market. Officers have an arsenal of weapons such as tasers, bean bag-loaded shotguns, pepper-filled pellets, rubber-coated bullets, and stun grenades from which to choose. But if this ping pong-looking pellet takes off, it could end up being a favorite.

Alexis Evans
Alexis Evans is an Assistant Editor at Law Street and a Buckeye State native. She has a Bachelor’s Degree in Journalism and a minor in Business from Ohio University. Contact Alexis at aevans@LawStreetMedia.com.
Share:
Related ItemsCrimeCrime in AmericaDarren WilsonFergusonGunLethal ForceMichael BrownMissouriMurderPolicePolice ShootingShotting