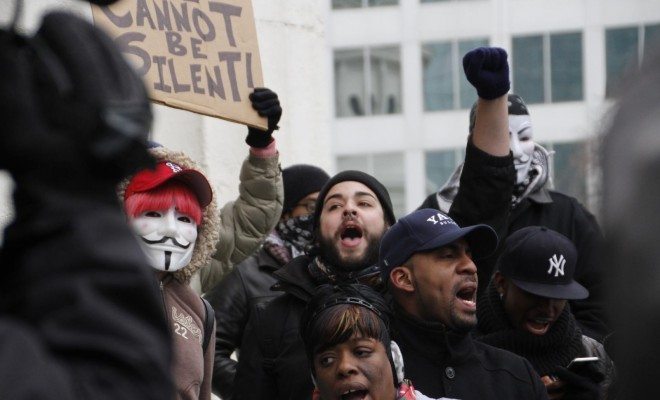 The Department of Justice (DOJ) has announced it will be filing suit against the city of Ferguson, Missouri, after the city went back on a negotiated deal that would help reform the criminal justice system in the beleaguered St. Louis suburb.

This is the latest move in Ferguson in the 18 months since Michael Brown was shot and killed by a white police officer, Darren Wilson. After the nationwide protests that followed, Ferguson was investigated by the DOJ. That investigation yielded a revelation about civil rights abuses at practically every level of Ferguson’s criminal justice system, including the consistent use of excessive force by police officers against the city’s Black residents, and that the courts inappropriately focused on “making money” rather than ensuring citizens’ safety.

After the release of that report, the DOJ sat down with Ferguson officials in an attempt to hammer out a deal that would reform the city’s criminal justice system. It was announced last month that deal was reached, and just this week city officials voted for it, but with seven pretty serious amendments, citing serious concerns about costs to a city that is struggling financially as is. Ferguson Mayor James Knowles explained the decision to back away from the agreement, according to CBS News:

Knowles said the seven amendments were formulated after the analysis showed the deal was so expensive it could lead to dissolution of Ferguson. The analysis suggested that the first-year cost of the agreement would be $2.2 million to $3.7 million, with second- and third-year costs between $1.8 million and $3 million in each year.

However, Attorney General Loretta Lynch fought back against the changes, stating that, “their decision leaves us no further choice.” As a result, the DOJ is filing a civil rights lawsuit against Ferguson. This doesn’t come as a surprise–Lynch has previously threatened to file suit if Ferguson didn’t comply with the DOJ’s requests.

Ferguson’s decision to fight a lawsuit rather than spend the money to make necessary changes to its criminal justice system may seem counterintuitive, but the city seems to think paying those legal fees will be cheaper than actually making real reform. It’s a calculated gamble, however, given that the Justice Department doesn’t seem willing to let go over reforming the city’s broken criminal justice system without a tough fight.

Anneliese Mahoney
Anneliese Mahoney is Managing Editor at Law Street and a Connecticut transplant to Washington D.C. She has a Bachelor’s degree in International Affairs from the George Washington University, and a passion for law, politics, and social issues. Contact Anneliese at amahoney@LawStreetMedia.com.
Share:
Related ItemsBlack Lives MatterDOJFergusonLoretta LynchMichael BrownMissouri