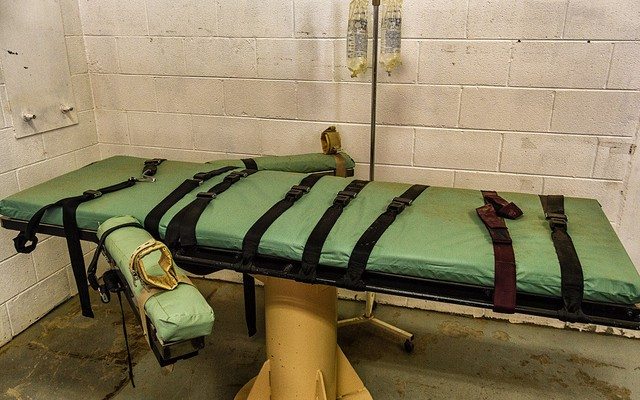 It should first be stated that I personally don’t condone the practice of the death penalty at all; to me, the idea begs the notion of “an eye for an eye,” a facet of the ancient Hammurabi’s code. Nevertheless, regardless of one’s position on the issue, the fact remains that when the death penalty is used, efforts must be made to ensure that the method of capital punishment limits unreasonable pain and suffering.

The Constitution protects against unnecessarily harsh treatment in the Eighth Amendment, which prohibits cruel and unusual punishment. In United States history, many methods of capital punishment have been swept out of use for being considered inhumane methods of execution. Practices used in the American colonies such as burning at the stake, crushing, and beheading are now determined cruel and unusual. In most states, methods such as hanging, electrocution, death by firing squad and gassing are also considered cruel and unusual, and the most accepted form of execution in recent years has been lethal injection.

However, in the case of Dennis McGuire, the lethal injection that caused his death should also be considered cruel and unusual. McGuire was given a combination of two drugs: midazolam, a sedative, and hydromorphone, a painkiller. McGuire’s lawyer argued that the combination of the drugs could produce the effect of air hunger, an uncomfortable experience that causes a sufferer to gasp for air. Additionally, since McGuire has shown several symptoms of the condition, sleep apnea, the drugs were even more likely to lead to suffocation. David Wasiel, a Harvard Medical School professor, testified to the apparent terror McGuire would be subjected to under the effects of the two drugs. Nevertheless, District Judge Gregory Frost claimed that there was not enough compelling evidence to prove there would be a risk of extreme discomfort and pain.

What is further striking about the decision to allow the injection is the fact that the specific combination of drugs had never been used. Even if the amount of evidence pointing to the likelihood of air hunger was lacking, surely it would seem reasonable to allow for a period of experimenting and testing, since the injection’s exact effects remained unknown.

Despite all warnings and uncertainty about the drugs’ effects, on Thursday, January 16th, Dennis McGuire was administered injections of both midazolam and hydromorphone. After the first five minutes following the injections’ entrance into the blood stream, McGuire’s breath grew irregular and he began to gasp and utter strange noises for about ten minutes. His family members, who were permitted to witness the guilty man’s final moments, grew shocked and horrified as they watched McGuire’s clear discomfort and agony prior to his death. In total, the execution took over twenty minutes, one of the longest in Ohio’s history since it reinstated the death penalty.

Of course, McGuire’s actions that led to his execution certainly offer little cause for sympathy. In 1989, he raped and subsequently killed twenty-two year old Joy Stewart, a pregnant woman, by stabbing her to death. McGuire deserved to be brought to justice for his heinous crime. However, when a state pursues a method of capital punishment that also causes unnecessary suffering, how then is a state’s law above the actions of the perpetrator?

The use of an untested injection to put Dennis McGuire to death is despicable. Why, it must be asked, was the injection involving the combination of drugs allowed to be administered? Other than the judge’s poorly made decision that the lack of evidence to prove there was a great risk of pain and discomfort involved in the use of the injection. Another reason may exist; Ohio was all out of its usual lethal injection cocktail and simply, needed something to fill the void.

Previously, Ohio had been using a sedative called pentobarbital for capital punishment, which typically had caused a shorter and less painful death. However, pentobarbital’s manufacturer recently cut off Ohio’s  access to the drug, barring its use for the death penalty. Without supplies of its usual drug of choice, the state turned to its untried back up method, the combination of midazolam and hydromorphone.

Desiring to carry out the execution of McGuire on schedule, Ohio would not wait for possible testing of the drugs’ effects or research into potential alternatives. Lacking regard for the human dignity of prisoners, Ohio decided to administer the injection despite its uncertain consequences, giving the execution an air of experimentation. The state must now answer to the McGuire family’s cries for legal action and has earned a place in the nation’s spotlight for its blunder. In the situation’s aftermath, other states should learn from Ohio’s misjudgment to prevent similar occurrences from taking place in the future.

Sarah Helden
Sarah Helden is a graduate of The George Washington University and a student at the London School of Economics. She was formerly an intern at Law Street Media. Contact Sarah at staff@LawStreetmedia.com.
Share:
Related ItemsDeath PenaltyDennis McGuireEighth AmendmentLawLegalOhioTrial