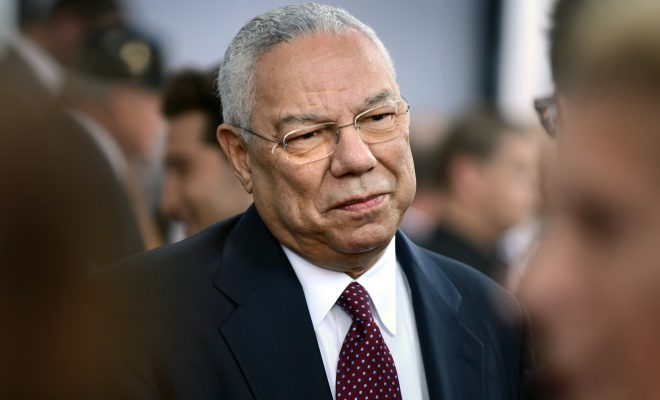 Hackers have leaked personal emails from former Secretary of State Colin Powell, in which he describes Donald Trump as a “national disgrace” and an “international pariah,” Buzzfeed reported. The website DCLeaks.com obtained the emails, which include exchanges between journalist and former Powell aide Emily Miller as well as other Powell associates. The leaks also highlight disagreement between Powell and the Clinton campaign over the use of her private email server during her time as Secretary of State.

In one email to Miller, Powell wrote that Trump “is in the process of destroying himself, no need for Dems to attack him. [Speaker of the House] Paul Ryan is calibrating his position again.” Powell also said that the idea promoted by Trump and others that President Obama was not born in the United States is racist. He said:

Yup, the whole birther movement was racist. That’s what the 99% believe. When Trump couldn’t keep that up he said he also wanted to see if the certificate noted that he was a Muslim.

Powell is a self-described lifelong Republican but has endorsed President Obama twice, indicating that he has problems with the direction Republican Party of today is heading. In another email with “Racism” in the subject line, he wrote, “Or as I said before the 2012 election, ‘There is a level of intolerance in parts of the Republican Party.’” He went on to say he wouldn’t comment about Trump to the media, arguing that it would feed into his ego.

Shortly after the leak, Powell confirmed that the emails are authentic and said that the hackers “have a lot more.” The website, DNCLeaks.com, has links to Russian-backed hackers who were previously accused of breaking into the accounts of the Democratic National Committee and releasing emails that embarrassed the party.

#DCLeaks Powell in leaked email: ‘I didn’t tell Hillary to have a private server at home’ https://t.co/uxALVOi4CC

In other leaked emails, Powell talked about Hillary Clinton’s private email server, an issue he wished to stay far away from. In February he wrote to Kenneth Duberstein, a White House chief of staff under president Reagan, saying, “I didn’t tell Hillary to have a private server at home, connected to the Clinton Foundation, two contractors, took away 60,000 emails, had her own domain.”

And in September 2015 email to Lawrence Wilkerson, his former chief of staff, he wrote, “[Hillary Clinton] and her mishandling of this has really given her a major problem I do not wish to get involved in, despite the best efforts of her team to drag me in.”

Defenders of Hillary Clinton like Representative Elijah Cummings have tried to point to Powell and Rice as a precedent for the use of a private email account while serving as Secretary of State. In a press release, Representative Cummings noted that both Rice and Powell had “received classified national security information” on their personal accounts. But Powell took issue with the classified emails that many cited, claiming that they were not classified at the time. Both Powell and Rice expressed, over email, an increasing annoyance with the situation.

This also led Powell to email Duberstein. “Stupid State Department dragged me in and I had to take care of myself […] I warned them. Don’t say these unclassified messages are classified or should have been classified,” he wrote.

Emma Von Zeipel
Emma Von Zeipel is a staff writer at Law Street Media. She is originally from one of the islands of Stockholm, Sweden. After working for Democratic Voice of Burma in Thailand, she ended up in New York City. She has a BA in journalism from Stockholm University and is passionate about human rights, good books, horses, and European chocolate. Contact Emma at EVonZeipel@LawStreetMedia.com.
Share:
Related ItemsClinton EmailsColin PowellDCLeaksDemocratic PartyDonald TrumpEmail HackersEmail LeakHackHackersHillary ClintonRepublican PartyTrump