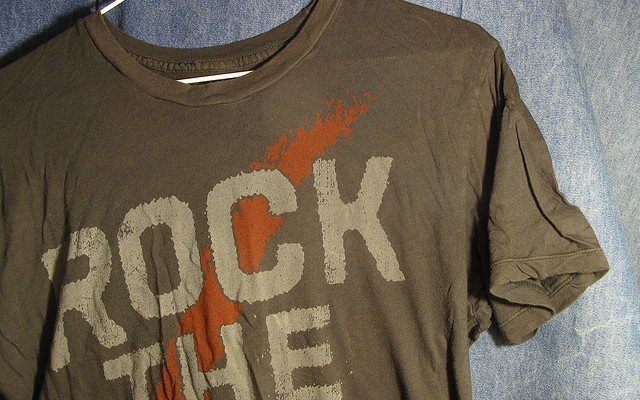 In today’s world of constant media consumption, it’s easy to form an opinion on just about everything. From sports, to religion, to Khloe Kardashian and Lamar Odom’s impending divorce, everyone wants their say. (I, for one, am very sad about the divorce.)

Even celebrities are getting in on the opinion smorgasbord fun! Some are genuine participants in the political sphere for better or for worse, like Alec Baldwin and Donald Trump. But sometimes their political statements go a little awry, which leads me to the theme of today’s list: 5 celebrities who cross over into the political arena…but fail miserably!

Let’s start off with a fun dalliance into global politics! Jennifer Lopez, pop star extraordinaire, was in Turkmenistan for a show earlier this year. Now for those of you who don’t know, Turkmenistan is really, really bad at human rights. In fact, it’s run by dictator Gurbanguly Berdimuhamedow, who is only leading the country because the former “President for Life” Saparmurat Niyazov died. Turkmenistan has been ranked as having the second worst Freedom conditions, behind only North Korea. So, based on all that information, you would think it would be inappropriate for J-Lo to sing Happy Birthday to Berdimuhamedow, right?

Wrong! She got the request while on stage in Turkmenistan, and her press team didn’t think to check into this Berdimuhamedow guy. She later apologized, but word to the wise: try to avoid singing to dictators. It’s frowned upon.

So this one is actually a couple years old, but it’s one of my favorites. The always poised and thoughtful Bieber was doing a Rolling Stone interview back in 2011. Now, to be fair, he was like what? 11? 12? (Edit: Google has informed me he would have been 16. I thought he was 16 now.) So he was 16, ok. That’s old enough to have some concept of politics. Especially if you’re a 16 year old with a huge following and the potential to be a role model to many young adults. So, when Justin Bieber was asked who he would support if he was old enough to vote, he stated with, “I’m not sure about the parties. But whatever they have in Korea, that’s bad.”

I don’t care if you’re 16. If the most intuitive political opinion you can give is that Korea (I’m just going to throw the kid a bone and assume he meant North Korea) is bad, something is wrong. Speaking of North Korea…

He meant well I guess? But this is just so weird. If we shouldn’t sing Happy Birthday to dictators, we definitely shouldn’t EMBRACE dictators.

I know, Jersey Shore is old news.  But a countdown of embarrassing political comments wouldn’t be complete without our dear, orange Snooki. In 2010, Snooki was angry. A 10 percent tax had been put on some tanning services.

Snooki spoke out about this unjustifiable, unwarranted, ridiculous tax on her lifestyle, stating “I don’t go tanning-tanning anymore because Obama put a 10 percent tax on tanning. McCain would never have put a 10 percent tax on tanning. Because he’s so pale, I feel like he’d probably want to be tan.” Now, technically speaking, there is a new tanning tax. The Affordable Care Act does levy a 10% tax on indoor tanning, similar to certain taxes on harmful substances, like cigarettes. But, Snooki, if one of your biggest political gripes is about having to pay a little more to go tanning, you’re probably not paying a ton of attention. And I think it’s important to point out that stating that McCain might want to go tanning might classify as insensitive, given that he did have pretty serious skin cancer a few years back.

1. Kenneth Cole Is a Huge Jerk

Kenneth Cole is an American shoe and clothing designer who ranks number one on this list thanks to two awesomely ignorant tweets. In 2011, he made headlines with a tweet about the Egyptian revolution:

This year, he did it again with a slightly more subtle (though equally horrifying) reference to Syria. 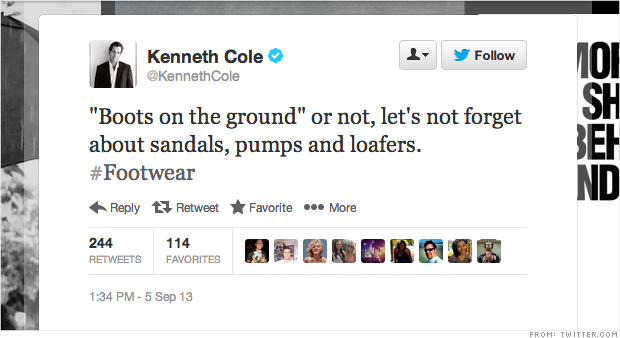 This is, of course a reference to the “Boots on the ground” phrase used by President Obama and Secretary of State Kerry in regards to whether or not they may send in intervening ground troops. Because when people are dying the most appropriate response is to try to sell more shoes. You’re a winner, Kenneth.

So, a tip to all the readers out there: when you become rich and famous, remember to use a little common sens, tact, and a filter. Otherwise I will find you, and probably mock you.

Anneliese Mahoney
Anneliese Mahoney is Managing Editor at Law Street and a Connecticut transplant to Washington D.C. She has a Bachelor’s degree in International Affairs from the George Washington University, and a passion for law, politics, and social issues. Contact Anneliese at amahoney@LawStreetMedia.com.
Share:
Related ItemsDennis RodmanGaffeJennifer LopezJustin BieberKenneth ColePoliticsSnookiTwitter