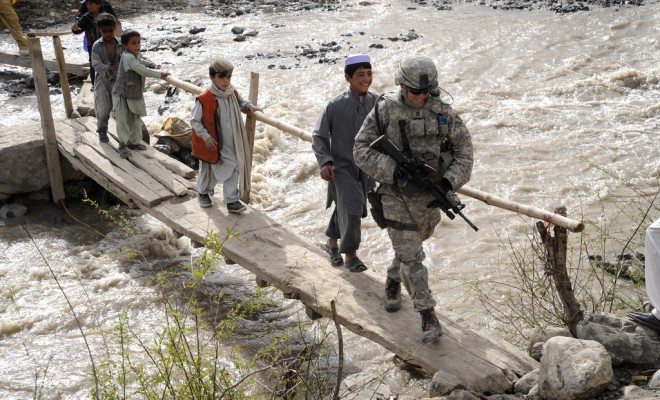 Starting in late April 2015, the Taliban launched its annual Spring offensive in Afghanistan. Since that time, the government has fought back and launched its own counteroffensive, which has continued throughout the month of May and into June. After more than a decade and major American military intervention, the Taliban remains active and strong within Afghanistan and neighboring regions. Read on to learn about the group’s origins, the impact of the American war, and the Taliban’s role in Afghanistan’s future.

The Origins of the Taliban

As the oft-told story goes, the Taliban emerged as one of the many competing groups among the Mujahideen fighting against the Soviets in Afghanistan in the late 1970s through 1980s. The group and many others that would make up the Mujahideen were supplied, equipped, and financed in part by large contributions from the United States and Pakistan, which shares a close tribal relation to the Taliban.

The group came to prominence beginning in 1994, succeeding the ouster of Soviet forces. Following the scramble for control, the Taliban, a predominantly Pashtun group, began taking over large swaths of territory. The motivation behind the group centered on a strict interpretation of Sharia law and Sunni Islam. In 1995 they captured their first province, Herat, bordering Iran. By 1998 they had conquered 90 percent of the entire country and were effectively in charge.  The video below details the origins of the Taliban.

While the Taliban enjoyed a seemingly meteoric rise from obscure Mujahideen group to the rulers of an entire country, it was not without substantial help–inadvertent or overt–from outside sources. This assistance begins with the United States.

As touched on briefly, the U.S. initially started supporting the Taliban and similar groups in the 1980s in an effort to defeat the Soviets in Afghanistan. This assistance was far from benign, in fact several Mujahideen members actually visited the White House and met with then-President Ronald Reagan. The relationship continued openly until as late as 1997, when members of the Taliban came to Texas to discuss building an oil pipeline in Afghanistan with an American oil company. This even while the Taliban had been suspected of hiding Osama Bin Laden as early as 1996.

Even after the war in Afghanistan started and dragged on, the U.S. was still allegedly funding the Taliban inadvertently. Up to a billion dollars a year in funding ear-marked for the Afghan government, was believed to be funneled directly to the Taliban.

While the United States has directly and indirectly funded the Taliban, Saudi Arabia has been more direct. The Taliban themselves are widely suspected of emerging from holy seminaries paid for by the Saudis, which cultivated the ideals of strict Sunni Islam. However, their support has not stopped there.

Along with other gulf countries, including the United Arab Emirates and Kuwait, Saudi Arabia remains the largest funder of terrorist groups, including the Taliban. These funds are not usually given out directly. Instead, they are channeled through a false corporation that may request support to build more schools, for example. The Taliban and other groups can also raise money from these countries through kidnappings and extortion.

However, the Taliban’s strongest supporter is likely Pakistan, which shares the closest kinship bonds with members of the Taliban. The Pashtun is a tribe whose members live in an area that straddles the northern borders of Pakistan and Afghanistan. Many of the early members were also educated in Pakistani schools known as Madrassas.

Pakistan’s relationship with the Taliban did not end there. Like the U.S., Pakistan funded the Taliban in their efforts against the Soviets in the 1980s; however, the Pakistanis’ efforts continued after the Americans left, as Pakistan’s Inter-Service Intelligence agency (ISI) continued to train members of the Taliban throughout the 1990s up until the American invasion in 2001.

In 2007, after being driven out of Afghanistan, the Taliban set up an organization in Waziristan, Pakistan and proclaimed itself an Islamic state. From this base the Taliban, which is still being supported by aspects of Pakistan’s ISI, has launched numerous attacks, assassinations, and kidnappings into Afghanistan.

The U.S. War in Afghanistan

Despite the Taliban coming to power essentially as a result of fighting one superpower, this did not prevent the other from going after them either. Following the terrorist attacks of 9/11, then-President George W. Bush gave the Taliban an ultimatum to either hand over Al-Qaeda and Osama Bin Laden or be attacked. The Taliban refused and U.S. forces were in the country in less than a month. Less than two months after that, the Taliban was defeated and pushed out of Afghanistan. Despite this victory, both Bin Laden and the leader of the Taliban, Mullah Omar, were able to escape to Pakistan.

Following the overthrow of the Taliban, the focus of the U.S. and its allies shifted to nationbuilding and keeping the remnants of the Taliban at bay. The Taliban however, would not be so quickly dismissed and began a resurgence starting in 2005. The Taliban traded in their old tactics of facing the U.S. in conventional battles for guerilla tactics–particularly suicide bombs–which had been effective in Iraq. The group also resorted to the opium trade for funding. Afghanistan would eventually reach a point where it was supplying 90 percent of the world’s opium.

The renewed and increased violence led to another major policy shift: the surge. The surge was a large additional deployment of U.S. troops to Afghanistan. Newly appointed general Stanley McChrystal requested the troop increase out of fear that at current levels the war may be lost outright. Following this in 2010, Afghan President Hamid Karzai began to publicly float the idea of meeting with Taliban leaders for the first time. While the U.S. initially condemned his actions, by the following year and in the aftermath of the assassination of Osama Bin Laden, the Obama Administration announced it was open to talks.

Along with attempts at negotiating with the Taliban, the U.S. and its allies also began shifting greater responsibility and power to their Afghan counterparts. The U.S. and NATO also planned to pull out all troops by the end of 2014. However, following continued violence, uncertain safety situations, and attacks on NATO troops by allied Afghan soldiers, NATO agreed to keep as many as 13,000 soldiers in the country as part of a new bilateral security agreement signed by Afghan President Ashraf Ghani. The war officially concluded in 2014, making it the longest war in American history.  The video below details the latest war in Afghanistan.

The Future of the Taliban in Afghanistan

So what is the Taliban’s position today? While as of 2014 they maintained direct control of only four of the 373 districts in the country, their reach is much greater. For example, in a 2013 assessment by Afghan security forces, 40 percent of the country was considered to be at a raised or high danger level. Furthermore, while Pakistan has paid lip service, the Taliban still have a strong base in the neighboring country. The group has also benefited from record poppy harvests and other illegal financing operations such as mining.

Negotiations of varying degrees have been attempted beginning as early as 2010. President Ashraf Ghani seems especially eager to bring the Taliban to the table, as his first two official visits were to Pakistan where the Taliban is strong and China, who has sponsored such talks. The two sides finally met in May and while nothing was agreed upon, just meeting was a step in a positive direction. However, for more meaningful action to be taken it may require removing all foreign fighters from Afghanistan as the Taliban has articulated.  The video below presents a desire by the Afghan president to talk with the Taliban.

The question now is how likely the Taliban is to actually come to the negotiating table in a meaningful way? The Taliban currently have an entrenched position and are reaping the windfall from record opium sales. It is very possible that the group will simply wait out the withdrawal of all foreign combat troops and then reignite the conflict with a government that has been repeatedly unable to answer to the task.

You reap what you sow. This is an old saying that essentially means your actions will have consequences, whether good or bad. For the United States, it used the Mujahideen in its fight against the Soviets in the 1980s then left them to themselves for much of the next two decades; however, 9/11 revealed what can happen as a result of benign neglect.

While the attacks were not orchestrated by Afghanistan, they were planned by the insidious leader of Al Qaeda, Osama Bin Laden, who was allowed to live in Afghanistan by the Taliban and who helped them gain more territory in the country.

Since that fateful day the U.S., its allies, and many average Afghanis have fought with the consequences of earlier decisions. This process has now seemingly come full circle, as the U.S. and its regional partners are advocating for talks with the Taliban and suggesting a role for them in the government. The Taliban, for their part, seemed hesitant to commit and more likely to wait out the complete withdrawal of foreign forces before striking again at what is viewed as a weak government.

BBC: Who Are the Taliban?

Nazareth College: The History of the Taliban

Council on Foreign Relations: The Taliban in Afghanistan

Michael Sliwinski
Michael Sliwinski (@MoneyMike4289) is a 2011 graduate of Ohio University in Athens with a Bachelor’s in History, as well as a 2014 graduate of the University of Georgia with a Master’s in International Policy. In his free time he enjoys writing, reading, and outdoor activites, particularly basketball. Contact Michael at staff@LawStreetMedia.com.
Share:
Related Items9/11AfghanistanDrugsGeorge W. BushIn the News NowPakistanPresident ObamaSaudi ArabiaSoviet UnionTalibanTerrorismThe Money BlogUnited Arab EmiratesWar