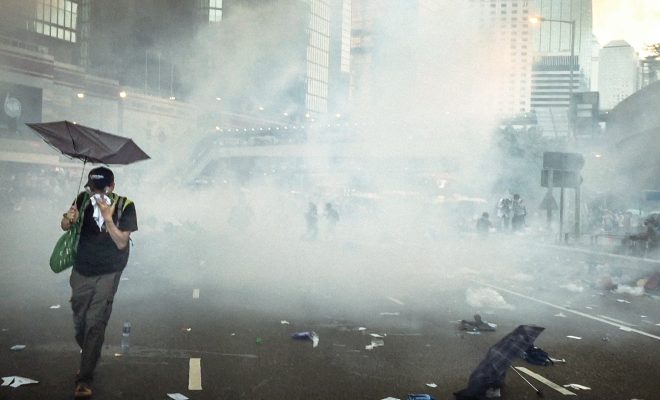 Hong Kong recently held elections to determine the next Chief Executive of the semi-autonomous region. Despite widespread pro-democracy protests in 2014, a pro-Beijing government official, Carrie Lam, was elected. Following the election, leaders of that very same pro-democracy movement were faced with threats of arrest. To fully understand these events, it is necessary to look back to Hong Kong’s history as well as the history of the protest movement. Read on further to find out where this movement sprang from and to learn about the current state of democracy in Hong Kong.

Humans have lived in what is now Hong Kong for thousands of years. However, it was not until the rise of the Eastern Han Dynasty that the area was considered part of the Chinese Empire. Beginning in the 12th century, five clans of the Han Dynasty, who still exercise power in Hong Kong today, began to arrive. Some believe that as these groups came to the area they started to push out some of the original inhabitants who moved onto houseboats and formed fishing communities that still exist today.

Despite Hong Kong becoming incorporated into the Chinese Empire, in many respects, it remained largely untended. Its location and the rise in trade allowed for the entrance of foreign actors, namely the Europeans. Trade flows started with the Portuguese and continued with the Dutch, French, and finally the British. Chinese authorities made efforts to curb European influence but they proved futile given the high demand for Chinese goods in Europe. Eager to correct a trade imbalance, the British introduced opium, which led to the emergence of a large market as well as the spread of addiction in China. In response, the Chinese Emperor tried to outlaw opium, culminating in the Opium Wars.

In 1842, following the first Opium War, China ceded Hong Kong to Great Britain and access to several ports in Treaty of Nanking. In 1898, the British were given an additional 99-year lease on the city as well as for 235 other small islands. Over the years, the city became a haven for those fleeing both domestic upheavals and later the Japanese during World War II. In 1941 Japan occupied Hong Kong, causing many to leave for mainland China. Britain later reestablished control in 1946.

Shortly after the war, Hong Kong underwent an economic boom. But in the following decades, the city saw social strife and riots as workers chafed at economic inequality and were influenced by policies from the mainland. In the 1970s, Hong Kong emerged as one of the “Asian Tigers,” a highly developed economy in the region. In 1982 Great Britain and China began negotiations to return the city to China, culminating in the Joint Declaration of 1984. This agreement called for Hong Kong to maintain its capitalist economy and partially-democratic system for the next 50 years. It’s important to note, however, that while the agreement called for eventual universal suffrage, that specific mandate was not guaranteed, leaving it open to interpretation.  The following video provides a good history of Hong Kong from the inception of British rule to the present:

The Chief Executive is elected by an election committee that is comprised of 1,194 members. Only 70 of the members are government officials while the rest are a mix of elites from various professions. This method of election has garnered extensive criticism and the results have sparked protests in the past. Much of that criticism is due to the heavy influence of Beijing among the elites as well as the extent of its influence over candidate selection and election rules. To win the election, the Chief Executive needs to garner a majority of the election committee’s vote.

The Legislative Council is currently composed of 70 members, up from its original 60. It has been in existence since the beginning of British rule in 1843. Originally, it served as more of an advisory board, but throughout the years–especially following the transition from British Colony to Chinese Special Administrative Region in 1997–it has taken on many of the responsibilities of a traditional Western-style legislature. Some of its specific duties include: enacting and amending laws, creating public budgets, appointing and removing the judges of the Final Court of Appeals and the Chief Justice, and holding the power to impeach the Chief Executive. Half of its members are directly elected based on geography, the other half are chosen by government bodies.

Below the legislature are the District Councils, which direct some public spending at the local level and advise the government on issues affecting people in their jurisdictions. Funding allocated to District Councils is typically used for cultural and community activities within the district.

The pro-democracy sentiment in Hong Kong has existed since before it became a Special Administrative Region in China. In 1984, China and Great Britain signed an agreement to transfer Hong Kong to the Chinese after Britain’s 99-year lease ended in 1997. That treaty led to the notion of “one nation, two systems” for Hong Kong and China. One of the basic tenants of this agreement was the Basic Law, which promised universal suffrage after a certain time period passed. However, the sentiment behind the treaty was quickly brought into question, long before the actual transfer, after China’s tough crackdown in Tiananmen Square. The 1990s saw another brief crisis when Great Britain’s last colonial governor tried to increase democratic reforms, which enraged the Chinese government. Ultimately though, it eventually agreed to a watered-down version of the reforms.

China’s choice for the first post-British leader, combined with a proposed anti-subversion law, quickly galvanized the pro-Democracy movement in Hong Kong. The anti-subversion law, which would have criminalized criticism of Beijing, led 500,000 people to march in the streets. Ultimately, the law was never enacted. Protests continued after this incident, including in 2004 when Beijing ruled against universal suffrage and direct elections for Hong Kong’s Chief Executive. In the following year, protesters held remembrances for the 16th anniversary of the Tiananmen Square protests; Hong Kong was the only part of China to acknowledge the anniversary.

A breakthrough was seemingly achieved in 2007 when Beijing promised to allow direct election of the Chief Executive by 2017 and the Legislature Council by 2020. Events seemed to be keeping pace in 2010 when the Democratic Party held its first talks with the mainland government since the transfer. In 2014, voters pressed the issue and in an unofficial referendum, 800,000 people, or 90 percent, voted in favor of having the power to select the list of candidates up for election. This referendum was dismissed and ruled illegal by China. In 2014, China went further and ruled that citizens of Hong Kong would not be allowed to directly elect leaders in the 2017 election.

These decisions led to the Umbrella Movement in 2014. The movement, named for the umbrellas that protesters used to shield themselves from tear gas and rain, grew out of an earlier student movement and led to the Occupy Central protests in Hong Kong’s financial district.  These, in turn, led to police crackdowns and anti-occupy protests. This continued until the protest camps were ultimately removed in December 2014. The accompanying video summarizes the Umbrella Movement in greater detail:

Following the most recent election, in which pro-Beijing candidate Carrie Lam was elected, at least nine protest organizers were ordered to report to the police or face arrest. This also sparked protests across the city and led to the planning of a citywide protest on July 1, Lam’s first day in office and also the 20th anniversary of Hong Kong becoming a part of China.

Hong Kong has long served as an important port city between China and the West. It served as a toe-hold for several competing European nations until the British finally established a permanent colony. Britain imported large amounts of opium and resorted to force to maintain its control over the city and trade with the region. However, under British rule, Hong Kong was often isolated from Chinese politics and developed its own civic culture. Although residents of Hong Kong never had universal suffrage–either under the British during the colonial era and now as a Special Administrative Region in China–Hong Kong has long had a distinct economic and political system that has been at odds with China.

When the British did eventually return Hong Kong to China, it was with the understanding that customs established under British rule, most notably limited democracy, would be respected. However, since the transition, democracy in Hong Kong has been challenged. The pro-democracy movement has endured in the face of many efforts by the Chinese to maintain control and stability. Perhaps the most obvious example was the Umbrella Movement. Mainland China is back on the offensive again though, with the recent arrests of Umbrella Movement leaders.

So, it will be interesting to see what the next step is. For all the talk of democracy in Hong Kong, its people have never actually elected its top executive; even when the British ruled the governor was appointed. Furthermore, while the protests against Beijing’s interference or for direct elections have drawn massive crowds, they have also spawned counter-protests. Hong Kong remains a divided city that faces several challenges when it comes to democratic concessions from the mainland. While the government in Beijing has allowed some reforms in the past, it remains reluctant to allow anything that resembles universal suffrage. While much of the future relies on the actions of the Chinese government, the pro-democracy movement will also need to coalesce around a clear vision for reform and transition.

Michael Sliwinski
Michael Sliwinski (@MoneyMike4289) is a 2011 graduate of Ohio University in Athens with a Bachelor’s in History, as well as a 2014 graduate of the University of Georgia with a Master’s in International Policy. In his free time he enjoys writing, reading, and outdoor activites, particularly basketball. Contact Michael at staff@LawStreetMedia.com.
Share:
Related ItemsChinaDemocracyGreat BritainHong KongIn the News NowUKUmbrella Movement