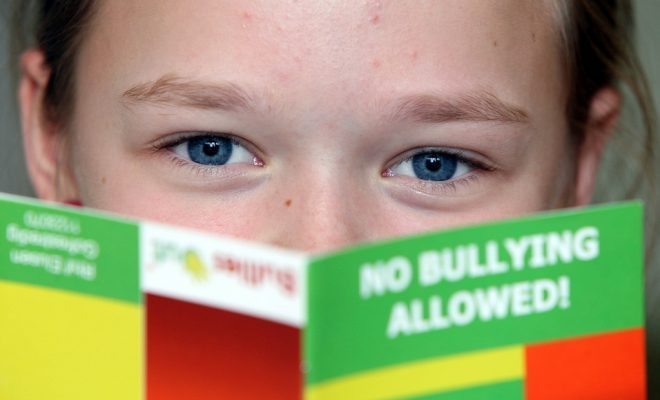 Technology and the Bullying Epidemic: The Case of Yik Yak

Between laptops, cellphones, tablets, and iPads, students have more access to technology than ever before, and this comes with numerous benefits — but it also comes with a lot of responsibility. Apps that allow anonymous users, such as the social networking app Yik Yak, are accused of creating more harm than good. Do these anonymous apps make cyberbullying easier?

What is Yik Yak?

Yik Yak was founded by two Kappa Alpha fraternity brothers, Brooks Buffington and Tyler Droll, at Furman University. The app was first released November 7, 2013. Yik Yak allows users to anonymously post to a community bulletin board, much like an anonymous college Twitter feed. Posts are text only and limited to 200 characters. The catch is that posts can only be read by those within a 1.5-mile radius of the person who posted. Users can reply to posts and then vote — an upvote expresses approval and a downvote conveys the opposite. Eventually posts with enough downvotes will disappear from the feed altogether.

Yik Yak is the first app to allow hyperlocal communication while retaining user privacy. The app claims the only information they will ever require is a user’s location. Yik Yak is used for telling jokes, sharing events, providing commentary, and relaying funny sightings. It initially gained popularity on Southern campuses and has spread by word of mouth to 250 campuses nationwide. According to Business Insider, the app is used by nearly 80 percent of the student body at smaller schools. The founders’ goal is to create a local community that keeps everyone, rather than just a select few, informed. In an interview with the Boston Globe, Droll said:

“We saw on our college campus that only a few people really had a voice. They’re the people with big Twitter accounts, maybe student athletes, who had thousands of followers. My thought was why can’t everyone have this power?”

While founders liken it to a campus bulletin board, critics contend that the app is more like a bathroom stall door where vicious rumors are spread. On June 30, 2014, Yik Yak got a huge boost in the form of a $10 million investment from DCM, Azure Capital Partners, and others. The funding will be used to hire new employees, improve the app on Android and iOS, and increase marketing efforts. Other investors have been wary due to concerns that the app does more harm than good.

So what’s the problem with Yik Yak?

The majority of messages on the site are positive; however, the ones that are hurtful can be horrific. Cruel comments spread quickly, even if the post is eventually removed. While the app was intended for college students, it has naturally spread to younger teens who use it to bully and spread rumors. Yik Yak does not require any potentially identifying information to sign up, including any pseudonym or avatar, and there is no way for users to see a thread of someone’s past yaks. Many users simply think what they post on the app is untraceable. Other similar apps, such as “Whisper” and “Secret” share anonymous posts with other users and have the potential for abuse. However, Yik Yak has more downloads than both of these apps combined and typically hits schools like a hurricane — even after one day of popularity, the app’s damage is done.

Yik Yak posts community guidelines, but the nature of the site makes it difficult to consistently and immediately enforce these rules. Following abuse of the app by younger teens, Yik Yak moved to ensure the app is only used by those 17 years and older. According to Yik Yak, users agree not to:

Ultimately, it is users who are left to police the app. Users can flag negative posts that they deem offensive. If two or more users flag a post, it is removed from the site. Alternately, users can send a picture of an offensive post to Yik Yak, and it will immediately be removed. Posts which contain names or phone numbers are removed. Yik Yak can terminate accounts of those who violate the terms and conditions, but not before the damage is done. Watch some of the controversy surrounding the app below:

How has the app been abused?

Most abuse of the app has come from high school students, but college students are guilty too.

New York Magazine chronicled the rapid spread of Yik Yak at Staples High School in Westport, Connecticut. Nasty comments forced many students to leave school in tears. No one was safe from the anonymous racist, homophobic, sexist messages that spread through the school in hours.  A sampling of the tamer posts includes comments like the following: “The fact that O.P has diabetes makes me happy;” “Nobody is taking H. to prom because nobody has a forklift;” “S.D. + 10 years = trailer park;” and “J.N. is a fag.”

The disruption at Staples High School was not an isolated incident. Marblehead High School in Massachusetts was twice evacuated due to bomb threats posted on Yik Yak. Students in California and Alabama have already been charged for making terroristic threats via Yik Yak. Users think they are completely anonymous.; however, authorities can track the address of the user and obtain their cell phone number from Yik Yak when necessary. While criminal posts are investigated, the everyday, hurtful posts are not. Watch some of the issues with Yik Yak below:

Most recently, the app has been used by Wall Street interns to bash Goldman Sachs. Some of the posts are funny and innocent, “Goldman interns wear sandals with socks” and “GS interns eat lunchables.” However, other posts are more offensive: “God hates fags and GS interns.”

What is being done to address cyberbullying on Yik Yak?

Bullies once used the playground. Now, cell phones can taunt from afar, and apps are the new breeding ground for bullying. Cyberbullying is defined as harassing or making fun of someone online or while using a cell phone or other electronic device. According to the Cyberbullying Research Center, roughly 25 percent of high school and middle school students report being cyberbullied at some point. Seventy percent of students report frequently seeing bullying online. Bullying can have extreme consequences, including low self-esteem, suicidal thoughts, anger, frustration, withdrawal, and antisocial behavior. And It does not end at high school — almost 20 percent of college students report being cyberbullied in their college careers. The disguise of anonymity on online apps makes it significantly easier for bullies to feel free to say anything they want without repercussions. Listen below to some of the bullying on Yik Yak at Boston College:

Yik Yak’s founders claim they did not expect the app to be so popular with younger users who are more likely to cyberbully. The pair do not believe high schoolers are psychologically ready for the app and have taken measures to limit use by younger teens. Technically, users must be 17 and over, but most teens ignore the restriction. School districts in Chicago faced significant problems with the app, leading Yik Yak to remove it from the Chicago area for a short time. Some Chicago school districts even sent letters home to parents about the growing problem.

Yik Yak now geo-fences high school and middle schools through a third party. The app uses GPS to detect when a user is inside a school building and will prevent anyone from posting from that location. Restricted service is in place at approximately 130,000 schools across the country.  While access may be prevented at school, students can still go home and post on Yik Yak.

What more can be done?

The anonymity of apps like Yik Yak make it extremely difficult for schools or anyone else to crack down on inappropriate use. Schools may be able to monitor social media accounts and discipline harmful behavior, but Yik Yak allows users to remain completely anonymous. When used responsibly, Yik Yak maintains that “anonymity is a beautiful thing.” There are no repercussions for mean posts, but vicious rumors spread faster than they can be taken down.

At some level, the app must take appropriate measures to ensure it is not being used in a harmful manner. Yik Yak declares it is not responsible for offensive or objectionable content. Further, Yik Yak relies on its users to monitor content. The app could take more responsibility by using a filter and automatically flagging certain offensive words that would require further approval from administrators. The Yik Yak site declares it reserves the right to monitor disputes and disable accounts. Critics contend that Yik Yak should have the obligation rather than right to fulfill those roles. Many also argue for greater repercussions for the app’s rule violators.

It is also unreasonable to expect an app to constantly monitor user-generated content. Parental involvement is necessary to monitor minors’ access to technology. Parents should strive to set guidelines, implement controls, and be knowledgeable about the technology their children are using. It is nearly impossible to monitor all of a child’s technology and social media activity. Instead, experts argue parents should have honest conversations about expectations and responsible behavior even on anonymous apps. By the time a child is in college, there is little more a parent can do to try to prevent bullying. Watch what parents need to know below:

Ultimately an app like Yik Yak is only part of the problem. Dozens of apps like Whisper, Snapchat, Vine, ask.fm, and JuicyCampus have the potential for abuse and bullying. The elimination of Yik Yak would not stop cyberbullying altogether. Students must be educated about the effects of cyberbullying and make the decision to behave responsibly despite the lure of anonymity.

New York Magazine: A Gossip App Brought My High School to a Halt

The Breeze JMU: Yik Yak is an Invasion of Privacy

Business Insider: Here’s What You Need to Know About Yik Yak