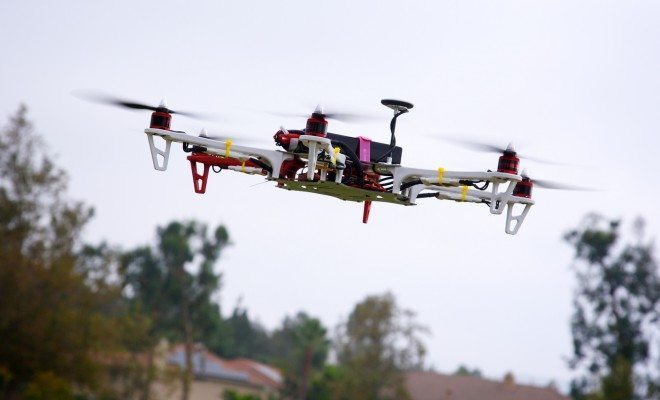 Where Are the Drones?: How Red Tape is Slowing Down Drone Delivery

Last year, JD.com, China’s version of Amazon, got its business off the ground–literally. The company launched a fleet of delivery drones that have been bringing packages to buyers within minutes. In one province, the company just received government approval to use drone delivery for packages weighing more than a ton, according to Vox. This form of delivery has been especially effective for JD.com in delivering packages to rural areas. The drones are fully automated and follow set paths. Rather than delivering straight to the customer’s door, they drop orders at a specific site in rural villages, where locally-based contractors then deliver the packages.

Faster delivery that reaches more people–it seems like a logical step for American companies. So why aren’t delivery drones flooding our skies? Read on to find out.

The idea of drone delivery isn’t a new concept to American business leaders. Back in 2013, Amazon chief executive Jeff Bezos discussed the possibility of drone delivery in a “60 Minutes” interview. Much of his segment is already dated–Bezos talked about the very beginnings of developing original television programming for Amazon Studios–however, he said drone delivery was only a few years away. American customers are still waiting on the first air delivery and Prime Air’s website does not yet list an official launch date for the service to be available to buyers.

“We will deploy when and where we have the regulatory support needed to safely realize our vision,” the website reads. “We’re excited about this technology and one day using it to deliver packages to customers around the world in 30 minutes or less.”

The biggest barrier is government regulation. The Federal Aviation Administration has historically been hazy on drone policy. The department has come under fire for not establishing clear privacy or safety laws for drones, also known as unmanned aerial vehicles.

In 2015, the FAA required drone users to register in a federal database. Last month, a federal appeals court in Washington, D.C. overturned that regulation, ruling that it did not have legal standing over those flying drones for recreational, not commercial, purposes.

To get around these federal roadblocks, Amazon has moved across the pond to test its delivery. Last summer, the company gained approval from the U.K. to test drones in the country’s airspace. Just a few months later, in a private trial, the company made its first drone delivery–an Amazon FireStick and a package of popcorn–to a customer in Cambridge.

In New Zealand, Domino’s is experimenting with drone delivery pizzas. And an American startup based in California is using the vehicles to transport medical supplies to Rwanda. Earlier this month, Amazon announced the creation of a drone testing center in Paris, which will work with the centers in the U.S., U.K., Austria, and Israel.

The delay in drone use in the U.S. is frustrating–to consumers, companies, and drone-use advocates. Timothy Carone, a professor at the University of Notre Dame and expert on automation (he co-authored the book “Future Automation–Changes to Lives and Businesses”), told Wired in December that it is “unfortunate, almost tragic” that Amazon is piloting drone delivery in the U.K., rather than in the U.S.

“The FAA, like most government agencies, works on times scales that are increasingly slower than the evolution of new businesses and technologies,” Carone said. “Soon it will make decisions on technologies that are already outdated.”

Since then, Prime Air has only made one delivery on U.S. soil–at an invite-only tech conference in March–and the delivery was pre-approved by the FAA. The convenience store 7-Eleven has had mild success in delivering packages via drone, but all of its trials have been within the pilot’s line of site, to customers within a mile of the Reno, Nevada store.

Beyond the regulatory barriers, there are a multitude of other concerns and problems that Amazon and other companies will have to address before drone delivery becomes commonplace in the U.S.

Air safety and environmental concerns are top priority. To ensure that drones can coexist peacefully with other aircrafts, avoid crashing into tall buildings and construction cranes, and aren’t hazardous to birds, trees, or bodies of water, companies that wish to use drones will have to work closely with air traffic control, even developing new systems. Amazon has said that data from its trials in the U.K. are helping to develop and improve air traffic control systems that deal with drones in both the U.S., through NASA, and in the U.K. And there is, of course, the very real fear that drone deliveries will wipe out thousands of driving and packaging jobs.

On top of these challenges, leadership at Prime Air has seen some turnover. The co-founder of the project, Daniel Buchmueller, quietly left Amazon at the end of last year, at what seems to be a pivotal time in the company’s pursuit of aerial delivery.

President Donald Trump’s actions on drones have largely dealt with warfare. In a controversial decision in March, Trump handed authority to launch drone strikes to the CIA. Under President Barack Obama, only the military had the power to launch strikes, making the operations more transparent since the Pentagon has to report on all airstrikes.

The new presidential administration has had little to say on commercial and recreational drone usage. But last week, the White House backed proposed legislation that would allow the government to track and destroy drones flying over U.S. soil that it deems a security threat. This is a security and privacy issue–the administration is concerned about the ability of terrorists to use drones to carry weapons or conduct surveillance.

The draft document warns that government activities, like wildland firefighting, search and rescue operations, and border control, could be threatened by the commercial availability of unmanned aircraft systems. According to the document, drones are difficult to detect and monitor, but the technology available to do so may not be currently legal for such purposes.

“Some of the most promising technical countermeasures for detecting and mitigating [unmanned aircraft systems] may be construed to be illegal under certain laws that were passed when UAS were unforeseen,” the document reads. “These laws include statutes governing electronic communications, access to protected computers, and interference with civil aircraft.”

It is unclear how legislation like this, should it pass, would affect the ability of companies like Amazon to use drones for delivery.

Elaine Chao, the new transportation secretary, spoke briefly on drones for commercial use during her confirmation hearings. She has not proposed any changes to policy as of yet, but emphasized the importance of safety regulations in any drone laws.

“Safety will continue to be the primary objective,” Chao said. “Regulatory decisions should be rooted in analysis derived from sound science and data.”

Chao also acknowledged that the government’s “failure to pace with emerging technologies” is causing U.S. transport to fall behind other countries.

“It’s an emerging technology, there are those who see the benefits of commercializing them for various uses, it’s transforming the way we work, the way we do commerce,” she said. “There are also those who are very concerned about privacy issues, security issues, and again for going forward with an emerging technology as important as this with such vast implications for our future, I think we need to talk about it, we need to have again a national consensus for where we’re going.”

With JD.com’s success with drone delivery, and Amazon’s fourth international development center opening soon, everyone from consumers to CEOs are anxiously awaiting improvements to federal policy that will make drone delivery a reality for Americans. Some say the key lies in redefining drones so that they are not considered aircrafts and subject to the same regulations as jetliners.

Even without delivery, the presence of drones themselves is only going to become more prominent as the months go on. The FAA estimated earlier this year that the number of drones used for recreational purposes will increase from 1.1 million in 2016 to more than 3.5 million over the next five years. For commercial drones, the fleet could grow from 42,000 in 2016 to as many as 1.6 million by the end of 2021, depending on how quickly regulations catch up.

With numbers like that, it’s understandable that American consumers are getting antsy waiting for drone-dropped packages to appear on their doorsteps.

Avery Anapol
Avery Anapol is a blogger and freelancer for Law Street Media. She holds a BA in journalism and mass communication from the George Washington University. When she’s not writing, Avery enjoys traveling, reading fiction, cooking, and waking up early. Contact Avery at Staff@LawStreetMedia.com.
Share:
Related ItemsAmazondrone deliveryDronesFAAJeff BezosTechnology