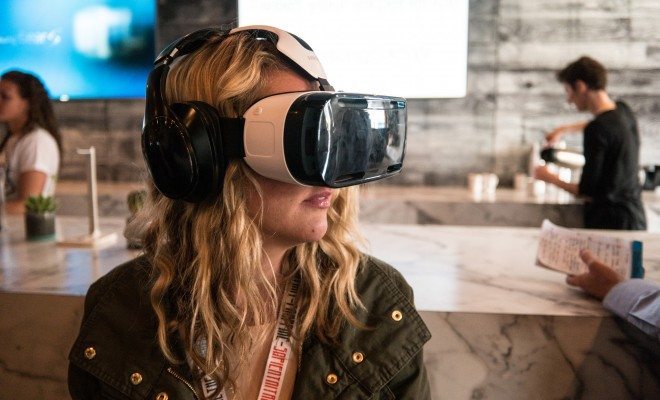 Phones, MP3 players, tablets, even watches have been heralded as next big thing in technology over the past decade or so. Now, however, that title belongs to Virtual Reality. Companies ranging from Facebook to Google to Microsoft have developed or are developing headsets that allow users to finally realize the virtual reality experience. While the industry is still in its infancy, a recent surge in funding and attention suggests virtual reality break-throughs in a number of different aspects of everyday life ranging from video games to movies. Read on to learn about the next big thing starting with its origins, how it actually works, what is currently available on the virtual reality market, and what is on the horizon.

The concept of virtual reality extends all the way back into the 1860s, when artists created 3-D circular pictures. However, like many other inventions, the progression of virtual reality was neither linear, nor was it the result of the work of just one person.   The rise of modern virtual reality can be traced the 1950s. In 1957 a man named Martin Hellig invented something known as the Sensorama, which combined 3-D pictures with wind, sound, and various smells.

This vision was shared by technician named Douglas Engelbart who saw the potential for digital displays in the future. His vision began being realized as part of a larger effort on behalf of the United States government to design a new radar system, whose recordings would be easier for humans to understand and interpret.

This work started bearing fruit in the 1960s when another scientist, Ivan Sutherland, developed a headset to design cars and mechanical parts on a computer. Another leap forward came in the form of flight simulators, which became increasingly popular in the 1970s as they offered a safer alternative to flight training than the actual thing. Initially, the simulator started off as stitched together movies, however as the technology advanced so they began offering video simulations that placed the person in the virtual cockpit.

VR also made it to the movies, as evidenced by the increasing incorporation and even reliance on visual effects in Hollywood blockbusters. In fact the first movie to depict the notion of Virtual Reality was the original Tron, which was released in 1982. VR was utilized in the video game industry as well as in arcades and early headsets, like Sega’s model form 1993. VR was also developed to assist with various rehabilitation exercises, namely to help those dealing with PTSD.  The video below takes an in-depth look at the history of virtual reality:

How does virtual reality work?

What exactly is virtual reality? For a basic definition it can be thought of as a computer generated three-dimensional world. This world can be experienced as the real world is, through sights, smells, and sounds. The basic parameters of generating virtual reality are similar, objects have to be life sized and there has to be some tracking mechanism, so when the viewer’s perspective changes what he or she sees also changes.

A key component of this is a concept known as immersion. Immersion includes depth and breadth of information. These deal with how a user interacts with their virtual environment and how effectively that environment is presented to them. There’s also another concept known as latency, which is the lag time between when a user changes their perspective to when the new perspective is clear. If the delay is too long, the immersive experience can be ruined. One important consideration regarding virtual reality is that while many of the recent models require or offer some form of a headset, a headset is not required to experience VR.

The number and quality of VR options on the market already vary widely. On the simplistic side is Google Cardboard, literally a cardboard box and a pair of lenses, which with a smart phone placed inside can give the illusion of virtual reality. At the other end of the spectrum are headsets like those produced by Oculus Rift. Oculus was initially funded through the crowd-sourcing site Kickstarter, until it was bought by Facebook for $2 billion dollars.

The Rift however, is not alone on the high end of virtual reality. Several rival headsets are also in production including the Samsung Gear, HTC Vive, and the Sony Morpheus. Perhaps the most intriguing rival is Microsoft’s HoloLens. Unlike the other headsets, which strictly focus on generating a virtual reality, the Microsoft headset is capable of augmented reality. Augmented reality is combining elements of the virtual and real world together.

Regardless of whichever headset a user prefers, there are number of uses for virtual reality already. Aside from some of the uses mentioned earlier such as gaming, treating PTSD, and training pilots, VR is also becoming valuable in sports. In football training, players can relive past situations in the hopes of better being able to diagnose how to perform in a certain situation in the future.

VR is helping dentists train as well, by offering an environment where they can learn without causing any real or feared damage to their patients. Virtual reality is also being employed in everything from public speaking training to helping people rehabilitate from strokes.

So, what is next from this technology? Like with the advent of 3D movies, one of the first impacted fields will likely be the film industry. In July of this year, Oculus signed a deal with Felix and Paul Studios to produce VR videos. There are other deals also in place for companies like Samsung and Google, who are using their own VR devices to provide customers with virtual experiences.

Along with movies, another area that is increasingly incorporating VR is the gaming industry. In fact Facebook’s Oculus Rift headset was developed originally for video games. There are also a number of competitors, including Sony and Microsoft, who are also planning to use their own headsets along with their video game systems.

Additionally, it has been suggested that VR can play more of a role in everyday pursuits. For example, imagine a courtroom setting where jurors could potentially put on one of these headsets and be transported to a crime scene so they could more clearly appreciate the facts of a case.

Conversely, while Facebook and its competitors see VR as a medium accessed through a headset that may not be its final form. In fact according to a study by Siemens Research people completing tasks guided by one of the headsets are actually less successful than those simply following a paper manual. The article suggests an alternative to the headset in general. This comes in the form of improving camera and display technology for a more immersive experience.

For any of this to be accomplished though, the major challenges of VR must still be confronted. First is solving issues with tracking–a major problem for early versions of VR is that they couldn’t accurately respond to a user. Secondly, environments themselves must also be developed that are complex enough to grab a user’s attention, but can also match what the user perceives, meaning he or she should hear wind if they see a tornado. The following video looks at virtual reality and its future:

VR has certainly made leaps and bounds over the decades, evolving from 3D images to headsets that can increasingly mimic natural surroundings. Nevertheless, for all the progress made, there is still much farther to go. Most of the tech heavyweights have put considerable resources behind this technology, but there are still few early returns.

Additionally, even when these headsets start hitting the market in earnest, either later this year or early next, their actual availability may still be limited to a number of factors, such as cost. The Oculus headset for example, is projected to run for as much as $1500 dollars. Additionally, precisely how VR will be used remains a mystery. While there is talk of it infiltrating all corners of modern life, the initial efforts seem limited to video games, videos, and to enthusiasts. Even the idea of a headset is not set is stone, as other traditional uses such as screens present strong alternatives.  Virtual reality may one day be the end all, be all of technology. For now though, all most people can do is sit back, relax and imagine a world where VR reigns supreme.

Tom’s Hardware: The Past, Present and Future of VR and AR

Read Write: Virtual Reality Films Could Put the Whole Industry in the Spotlight

Michael Sliwinski
Michael Sliwinski (@MoneyMike4289) is a 2011 graduate of Ohio University in Athens with a Bachelor’s in History, as well as a 2014 graduate of the University of Georgia with a Master’s in International Policy. In his free time he enjoys writing, reading, and outdoor activites, particularly basketball. Contact Michael at staff@LawStreetMedia.com.
Share:
Related Items3DAndroidFacebookGoogleTechnologyVirtual Reality