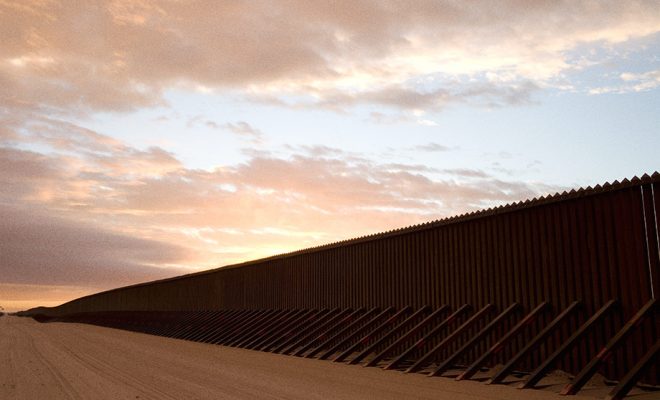 One of President Donald Trump’s main campaign promises was to “build a wall” on the border of the U.S. and Mexico. During his first few days in office, President Trump signed an executive order on border security and immigration enforcement improvements. In Section 2 of the order, it reads that it is the policy of the executive branch to: “secure the southern border of the United States through the immediate construction of a physical wall on the southern border, monitored and supported by adequate personnel so as to prevent illegal immigration, drug and human trafficking, and acts of terrorism.”

Many of President Trump’s supporters are also ardent fans of the construction of a wall along the U.S.-Mexico border. Despite encountering intense opposition from Democrats and some Republicans, the Trump Administration appears to be committed to beginning construction as soon as possible. However, there may be roadblocks ahead for the massive security project, such as issues of eminent domain and private citizens blocking or severely slowing construction of the wall, in addition to environmental concerns and waivers that must be obtained before beginning construction.

Border security is critically important to our overall national security. As noted by the order, aliens who illegally enter the U.S. without inspection or admission present “a significant threat to national security and public safety.” President Trump’s executive order seeks to expedite determinations of any apprehended individual’s claims that they are eligible to remain in the U.S., as well as promptly remove any individuals whose claims have been lawfully rejected.

A critical component of Trump’s presidential campaign was regaining control of America’s borders. Now that he’s president, the particulars of how he will finance the massive border wall are still up for debate. The wall is estimated to cost $21.6 billion (though other estimates put it anywhere between $8 billion to $25 billion). The executive order signed by Trump in January contains no mention of the cost of construction. Mexico has repeatedly stated that not only will it not pay for the wall, but it will retaliate if a border tax is imposed. The order also required government agencies to report the financial assistance they gave Mexico in the past five years, giving rise to speculation that Trump wants to redirect the aid to pay for the wall.

Currently, there are hundreds of companies looking to profit significantly from the construction of a border wall. More than 375 companies have expressed interest in participating in the project. The U.S. Customs and Border Protection agency said it would likely begin accepting prototypes in March 2017. Those that are approved will be asked to submit full proposals. Surprisingly, a Mexican company, cement maker Cemex SAB, has stated that it would be willing to provide supplies to the project. The plan to seal the border would take three phases, with over 1,250 miles of fences and walls, and would be completed by 2020. San Diego, California; El Paso, Texas; and the Rio Grande Valley in Texas are expected to be part of the first phase. A U.S. Department of Homeland Security internal report also showed that the U.S. government has begun seeking environmental waivers to build in specific areas.

President Trump is not the first president to propose a wall between the U.S. and Mexico. On October 26, 2006, President George W. Bush signed the Secure Fence Act of 2006. The goal of the act was to build 700 additional miles of physical barriers along the U.S.-Mexico border, and authorize more vehicle barriers, checkpoints, and lighting. It also gave the Department of Homeland Security permission to use technology such as cameras, satellites, and unmanned aerial vehicles, and specifically noted that there would be at least two layers of reinforced fencing. In 2006, both Democrats and Republicans overwhelmingly supported the act, including then-Senator Barack Obama.

In 2008, Congress introduced the Reinstatement of the Secure Fence Act of 2008, which called for Homeland Security to again construct more fencing. This time it asked for an additional 700 miles of two-layered, 14-foot high fencing along the southwestern border of the U.S., but the bill never made it out of committee. The Secure Fence Act of 2006, however, was amended in 2007 to give the Department of Homeland Security discretion in determining what type of fencing was appropriate, given the different terrain along the border. A one-size-fits-all approach, according to many, including the U.S. Border Patrol (USBP), was not an effective manner to tackle securing the border.

Once construction on the previous border wall began, the government ran into issues with landowners near the Rio Grande. Hundreds of landowners protested what they called a “government land grab” to install the fence. It resulted in 320 eminent domain cases being taken to court. In order to purchase property for the construction of the wall, USBP had to settle with private landowners. While some settled out of court, others are still fighting.

Some private property owners want more money, while others want a gate in the fence to be able to access their land on the other side. Eloisa Tamez, 81, was given a code to get through a gate to access a quarter of her three-acre ancestral property that was bisected by the 18-foot barricade. A prominent border wall opponent, Tamez battled her case in court for seven years, before she eventually lost to the government. She was awarded $56,000 for her loss of land and the inconvenience, but says she wasn’t looking for money–she wanted to keep her land without the barriers.

The government almost always wins in eminent domain or condemnation cases, but these cases can take a significant amount of time and resources to settle. Therefore, landowners fighting President Trump’s proposed border project may have the ability to slow the project down immensely. NPR analyzed more than 300 fence cases, and found that two-thirds of them have been settled, with most taking about 3.5 years for a resolution and usually involving under an acre of land. The median settlement awarded to landowners was $12,600.

Other Concerns and Considerations

Aside from the eminent domain, private property rights, and human rights concerns with building a border wall, there are also environmental considerations. Arguably, the full construction of a wall will interfere with the migration of animals and plant pollination. Immense amount of traffic around the wall will destroy flora and fauna, potentially leaving large amounts of garbage and debris in the area as well. These environmental concerns do not seem to be of much importance to those in favor of construction.

Juanita Molina, the executive director of Border Action Network, told NPR that construction of the wall could cause flooding issues. A wall will profoundly affect the connectivity of species, fragmenting habitats, and block the free movement of wildlife. So, the border wall has the potential to spread detrimental consequences not just to humans, but also to other species. Additionally, building over major physical barriers, like mountains which dot the U.S.-Mexico border, make the border wall almost impossible to build.

Moreover, it is clear that the wall will disproportionately affect people of color. Militarization of the border means that minority communities will be targeted and even displaced. Millions of people live on both sides of the border. In the four states–California, New Mexico, Texas, and Arizona–on the U.S. side of the border, people of Mexican origin comprise at least a quarter of the total population, and even higher concentrations exist within 100km of the border itself.

The executive order signed on January 25, 2017, is still in effect. Many people who voted for President Trump view the wall as his signature campaign promise and expect to see progress made on its construction as soon as possible. Companies also seem to have an overwhelming amount of enthusiasm for profiting off the proposed construction. However, private property owners may have the most power in stalling the wall’s completion for a significant period of time, and the efficacy of a wall in actually securing the borders is certainly up for debate. For now, President Trump has promised that construction is “going to start very soon. Way ahead of schedule. It’s way, way, way ahead of schedule.”

Nicole Zub
Nicole is a third-year law student at the University of Kentucky College of Law. She graduated in 2011 from Northeastern University with Bachelor’s in Environmental Science. When she isn’t imbibing copious amounts of caffeine, you can find her with her nose in a book or experimenting in the kitchen. Contact Nicole at Staff@LawStreetMedia.com.
Share:
Related ItemsBorderBorder WallEminent DomainExecutive OrderMexicoMexico BorderTrump