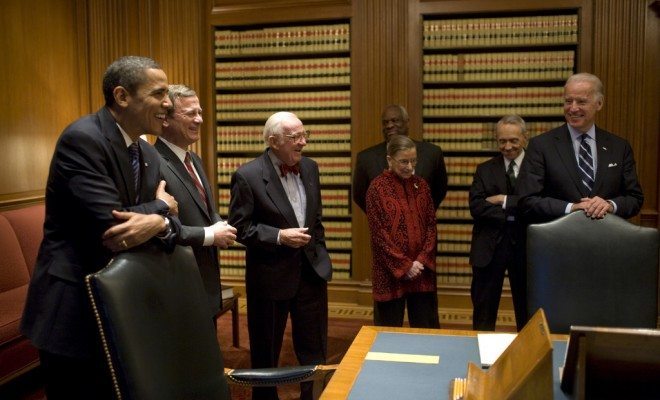 The Supreme Court is making back-to-back headlines lately with a substantial number of major cases being decided . Judicial opinions and dissents are of the utmost importance, more than ever to this generation. America is undergoing a major shift in opinion regarding civil liberties. Although we are in the middle of what seems to be a crisis of racial tensions, the majority of Americans now stand behind equal freedoms regardless of race, sexual preference, religion, or gender. We see this more every day. Confederate flags are being lowered across the South. Although tolerant beliefs are expanding, it means little without mirrored changes in law. The Supreme Court’s decisions are the absolute law of the land. The nine justices decide which laws are constitutional and which are not. So it is no surprise that the appointment and confirmation of justices by the executive and legislative branches are undertaken with the gravest sincerity. Democrats and Republicans alike want justice on their side for the big issues. The justices preside over monumental decisions that write history. So what goes into a judicial appointment? What mistakes have liberals and conservatives made in choosing justices? And are any judicial transitions coming up in the near future?

How do judicial appointments work?

Supreme Court justices are nominated by the president, rather than elected. The nomination must be confirmed by a majority vote of the Senate, and appointments are set for life. A president can only make a nomination when one of the acting nine justices steps down or dies. The president may turn to the Department of Justice, the Federal Bureau of Investigation, members of Congress, sitting judges and justices, and the American Bar Association advice and support. Interest groups can offer influence as well. For example, after Justice Byron White retired in 1993, President Clinton received open declarations from multiple women’s group advocating for a female nomination.

Legal competence and exceptional ethical behavior are primary qualifications for nominees. Candidates who clearly demonstrate these qualities have a much stronger shot at being confirmed by the Senate. Candidates are scrutinized very closely. For example, the Reagan administration embarrassed itself when Douglas Ginsburg, a judicial nominee, was discovered to have a drug problem. The administration took extra care to make sure the next appointment,  Justice Anthony Kennedy, was completely clean. Since legal competency and ethical behavior are vital factors, most judges do not campaign for the appointment, but rather let their work speak for itself, though there are exceptions. Former President William Taft ran a successful campaign that led to his appointment. Other criterion include political ideology, party affiliation, personal loyalties, ethnicity, and gender. A president wants a nominee’s ideologies and outlooks to line up with his own, and he often sees nominations as a major part of his legacy after service.

Once a presidential nomination is official, the referral is sent to the Senate Judiciary Committee. It gathers evidence and conducts hearings with various testimonies from the candidate and other witnesses. Then it votes for the recommendation to the Senate. The vote is then sent to the Senate floor. Since the late 1940s, the Senate has been less likely to easily accept nominations. Between 1949-mid 2000s, four nominations were defeated, seven received more than ten negative votes, and others encountered heavy resistance. A nominee with moderate politics will find the process easier and faster.

Who sits on the bench today?

The Supreme Court has nine members, one of whom is the chief justice. Today there are six men and three women, all described more below.

The selection of each justice is vital as it could drastically affect the outcome of major cases. Our political climate could be vastly different today if certain nominations came from different presidents and at different times. Today a significant number of major cases come down to a 5-4 vote with the decision based on ideological lines. That is one justice setting the legal tone for the country. It showcases the importance of the individual. Here are some recent examples.

On June 29, 2015 the Court decided on 5-4 vote that an execution drug that renders prisoners unconscious in the first stages of the lethal injection process is constitutional and doesn’t violate the Eighth Amendment–cruel and unusual punishment. Justice Kennedy was the swing vote.

On June 29, 2015 the Court found in a 5-4 vote that the Environmental Protection Agency didn’t take a cost-benefit analysis into consideration before setting limits on mercury and other pollutant emissions on power plants. Therefore, the agency violated the Clean Air Act. Once again, the swing vote was Justice Kennedy.

On June 26, 2015 the Court voted 5-4 that same-sex marriage is a guaranteed nationwide right. Once again the swing vote was Justice Kennedy, even writing the majority opinion.

In such a serious and consequential process, there can certainly be mistakes and regrets. First, Presidents are known to have regretted appointments. There isn’t a guarantee how Justices will vote in the future and how ideologies can change. Once confirmed, the pressures on the justices are less from the outside of the courtroom, but more from within. Also, justices aim at stepping down at the appropriate time in order to secure an approved replacement. Basically, a conservative justice wants to retire under a Republic president and vice versa.

Republican President  Theodore Roosevelt appointed Oliver Wendell Holmes to the bench in 1902. Justice Holmes ultimately voted against the president in major cases challenging the legality of the Sherman Antitrust Act. In response, President Roosevelt famously said, “Out of a banana I could carve a firmer backbone.”

Dwight D. Eisenhower claimed his appointments of Earl Warren and William Brennan were the two biggest mistakes of his presidency. Both appointments added to the 1960s’ strong liberal court. Warren, as Chief Justice, oversaw a court that fought against racial segregation, banned school prayer, and advocated for individual rights against the federal government. Brennan supported affirmative actions and voted to overturn flag-burning laws.

Republican President Richard Nixon appointed Harry Blackmun in 1970. Blackmun turned around to support a woman’s constitutional right to an abortion in the 1973 Roe v. Wade case.

Justice Anthony Kennedy, our current swing vote, was appointed by Republican President Ronald Reagan. He has been at the forefront in advocating for gay rights, the elimination of the death penalty for juveniles, and banning prayer at school graduation.

Democrats have a stronger record of bad timing. Compared to their Republican counterparts, Democrats have been less strategic in nominations and in the timing of judicial retirements. For example, President Johnson nominated Abe Fortas for the Supreme Court, highly due to his personal relationship with him as his former personal lawyer and friend. The Senate jumped all over this relationship and ultimately defeated the nomination. By the end of the dragged-out process, President Johnson no longer had time to make another nomination. The task ultimately was left to his successor, President Richard Nixon, who nominated strong conservative Warren Burger.

Other justices fail at timing their retirements. Liberal Justice Thurgood Marshall refused to retire toward the end of his career while Democrat President Jimmy Carter was in office. Consequentially, Republicans won the next three presidential elections and Marshall was forced to leave his seat to Republican Clarence Thomas. This also occurred with Hugo Black replacing Lewis Powell.

As of today, no Supreme Court Justice has announced plans for retirement. However, some seem to be nearing the end of their careers, solely based on age. Justice Ginsburg is the oldest at 81. Not far behind are Justices Breyer and Kennedy, both 78, and Justice Scalia at 75. Will Justice Ginsburg retire under President Obama in a strategic move? According to Erwin Chemerinsky, Dean of the law school at the University of California, the “best way for her to advance all the things she has spent her life working for is to ensure that a Democratic president picks her successor.” Many factors play into this decision, such as the 2016 presidential election. Also that the Republicans currently have a Senate majority. The next nominations are more important than ever as so many cases are decided by a swing vote.

Some people don’t agree with partisan politics being weighed so heavily in the judicial branch of our government. And maybe they shouldn’t. But that doesn’t change the consideration and strategic thinking that go into Supreme Court nominations. As serious as the matter is, and with all the input and advice sought, mistakes are still made. Successful nominations as well as regrets have helped shape this nation for better or worse. Only time will tell what is to come for our next group of Supreme Court Justices. It will be interesting to see what moves are made by the upcoming retiring justices, Senate, and future president .

CQ Press: The Selection and Confirmation of Justices

American Government: How Judges and Justices Are Chosen

The New York Times: The Supreme Court Blunder That Liberals Tend to Make

Jessica McLaughlin
Jessica McLaughlin is a graduate of the University of Maryland with a degree in English Literature and Spanish. She works in the publishing industry and recently moved back to the DC area after living in NYC. Contact Jessica at staff@LawStreetMedia.com.
Share:
Related ItemsAppointmentJudiciarySCOTUSSupreme Court