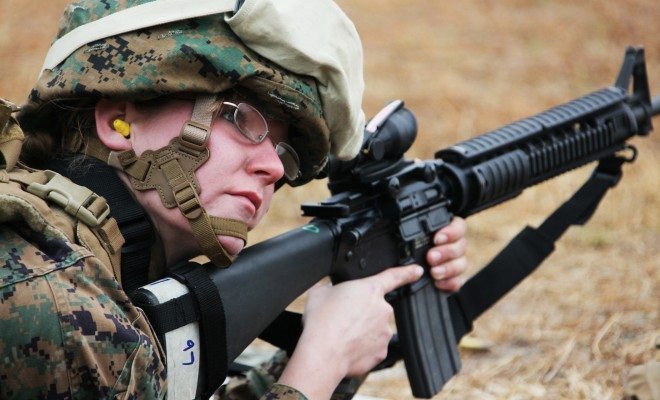 Still Not Good Enough: Sexual Assault in the Marine Corps

Last week, a report obtained by the Washington Post revealed that there have been seven sexual assaults reported within the last year in a Marine Corps unit that was specifically designed to study how to best integrate women into combat roles. The report rocked the Marine Corps, which had just published a study claiming that sexual assault in mixed-gender units is no higher than in the Marine Corps as a whole. That study was by no means a statistical analysis to brag about–for years, the Marine Corps has had the highest rate of sexual assault against women in the armed forces.

The gender-integrated unit was meant to be a shining example of how much the Marine Corps has matured and adapted to protect women who serve, but it has now become a harsh reminder of the prevalence of sexual violence in combat.  The unit in question was comprised of approximately 100 women and 300 men and underwent training at Camp Lejeune in North Carolina, which is the largest Marine Corps base on the East Coast, (on a weekday there may be as many as  100,000 people at Camp Lejeune and at the neighboring air station) before training in California.

Six of the seven assaults discussed in the Post report were reported anonymously, which is often considered the safer option among survivors of sexual assault, especially in cases where the survivor has to be in constant contact with the assailant in the workplace. According to a recent Pentagon survey on sexual assault, 62 percent of women who reported being sexually assaulted experienced retaliation.  It is twelve times more likely that a sexual assault survivor in the military will be retaliated against than it is likely their attacker will be prosecuted for a sex offense. Even for those survivors who report their assault, justice is rarely delivered.  A 2014 RAND survey found that 45 percent of survivors were dissatisfied or very dissatisfied with their chain of command’s response after they reported their assault. Read on to learn about the issue of sexual assault in the Marine Corps, the newest controversial report, and the considerations moving forward.

Before the Marine Corps continues its efforts to meet President Obama’s goal to integrate women into all combat positions or provide specific exemptions by 2016, a spotlight must be placed on the unit that trained at Camp Lejeune. Camp Lejeune is not the only military base where sexual assault has taken place (and the report does not cite specifically where the assaults took place) but as one of the largest bases in the country, its policies provide an important glimpse into the culture of sexual assault awareness in the Marine Corps.  It is obviously easier to police smaller bases, but one would hope that the larger Marine bases serve as models for procedure across the country.

Camp Lejeune, built in 1941, has a history of conflict and scandal. From 1957 to 1987, the water on base was contaminated with over 70 chemicals that poisoned Marines and their families (the staff on base did not comply with regulations on the dumping of chemicals). In 2012, the Janey Ensminger Act was passed to compensate the hundreds of people who were victims of the contamination but Camp Lejeune will forever be remembered for its failure to respond to residents’ claims sooner. Camp Lejuene was also the site of a military riot between black and white Marines on July 20, 1969 during which fifteen Marines were injured and one man was left dead. In the wake of the riot, the Marine Corps reformed race relations, but once again it was criticized for taking too little action, too late.

The modern Camp Lejeune is a thriving military community that usually makes headlines for its major pediatrics center, innovative renewable energy program and commitment to Marine families. However the size of the base, and the constantly rotating military population, makes it difficult to police effectively. Camp Lejeune was the site of 70 cases of sexual assault in 2012, a figure that has held relatively consistent in the intervening years.  Sexual assault cases account for approximately 60 percent of the caseload for the Naval Criminal Investigative Service (NCIS) unit on base. Earlier this year, Camp Lejeune hosted a 5K run to raise awareness for sexual assault and promoted April as Sexual Assault Awareness Month. However, the administration on base has yet to release a statement on the sexual assaults that were reported by the Post.

Camp Lejeune is as large and well-organized as a medium-sized city (in fact, Jacksonville, NC, the nearest city, has a smaller population than that of the base–only 70,000 people) and therefore it has to address sexual assault as a serious threat to its population. Camp Lejeune operates a 24/7 Sexual Assault Hotline and connects military families with support groups, as well as all the resources that the Marine Corps offers on a national level. Yet in 2012, it was the site of more sexual assaults than any other Marine base in the world. Critics hope that the disproportionate number of sexual assaults that occur at Camp Lejeune will encourage Marine Corps leadership to funnel more resources into sexual assault awareness and prevention, but at this point, Camp Lejeune’s efforts at reform are underwhelming.

The Sexual Assault Prevention & Response Program (SAPR) performs outreach to military members who have been victims of sexual assault, connecting survivors with advocacy groups, medical aid, and legal advice.  In a 2013 meeting of the Senate Armed Services Committee, General James F. Amos claimed that the Marine Corps has witnessed measurable improvements in handling sexual assault cases, but Senator Kirsten Gillibrand (D-New York) has repeatedly argued that there is a need for reform and restructuring of the SAPR and other outreach initiatives. In 2013, Gillibrand introduced the Military Justice Improvement Act, which aimed to reform the procedures for the process of trial by court-martial, setting up an independent tribunal where survivors can report assault without fear of retaliation. Taking the judicial process out of the original chain of command was a controversial move on Gillibrand’s part–some of her fellow Democrats disagree with implementing a different process. However, Sarah Plummer, a survivor of military sexual assault has stated that:

Having someone within your direct chain of command handling the case, it just doesn’t make sense. It’s like your brother raping you and having your dad decide the case.

For the past two years, the Military Justice Improvement Act has fallen short of the votes needed for it to pass in the Senate–but it has put pressure on the military (specifically the Marine Corps) to improve its sexual assault response programs. According to a 2014 SAPR report, the primary goals of the Department of Defense’s Strategic Plan are prevention, investigation, accountability, advocacy/victim assistance, and assessment. SAPR focuses on developing the advocacy/victim assistance portion of the plan but there have been several concerted efforts to improve prevention: standardizing procedures that prohibit inappropriate relations between recruiters/trainers and recruits/trainees, adapting alcohol policies, and designing a collaborative forum for sexual assault prevention.

The Marine Corps is considered the most difficult sector to integrate out of all of the military branches trying to introduce women to combat units. The Marines are 93 percent male, have only a handful of integrated units, and still train male and female recruits separately. The ongoing debate on integrating women into combat (examined in depth by Law Streeter Jessica McLaughlin) has been influenced in recent months by a leaked Marines Corps report that states women in combat may reduce performance, but may also increase decision making in the field. This report did not find sufficient evidence to change the traditional mentality of Marine Corps leadership on integrating women, and it has been predicted that the Marine Corps will ask for exemptions from President Obama’s order (keeping some positions male-only). The Marine Corps have not announced any plans to disband the units designed to test the integration of women in combat, yet once President Obama leaves office, his successor may not place sufficient pressure on the Marines to integrate. If that happens, many fear that the Marine Corps will almost definitely return to their segregated, traditional employment practices. For women who have begun training in combat practices, this would be a major step backwards professionally. Integrating more women into combat positions would not only create parity in the armed forces, it would place massive pressure on the Marine Corps to improve its sexual assault prevention program.

Women have served in the Marines since 1918 (in clerical positions) and were integrated into the Marine Corps in 1948. Their service to their country has paralleled that of their male counterparts, and participating in combat scenarios would let them reach the ultimate level of commitment to their profession. However, if sexual assault continues to plague the Marine Corps’ combat units, women cannot perform their duties and contribute to the mission of the armed forces. The deadline for the armed forces to integrate women into combat is January 2016. If the Marines commit to full integration, they will need to reexamine their approach to sexual assault in order to protect Marines both at home and abroad.

Department of Defense:  Annual Report on Sexual Assault in the Military, Fiscal Year 2014

Stars and Stripes: Reports of Sexual Assault Made by Marines in Unit Focused on Integration of Women

Huffington Post: Military Rape Cases Will Stay Within The Chain Of Command

Jillian Sequeira
Jillian Sequeira was a member of the College of William and Mary Class of 2016, with a double major in Government and Italian. When she’s not blogging, she’s photographing graffiti around the world and worshiping at the altar of Elon Musk and all things Tesla. Contact Jillian at Staff@LawStreetMedia.com
Share:
Related ItemsMarinesSexual AssaultWomen