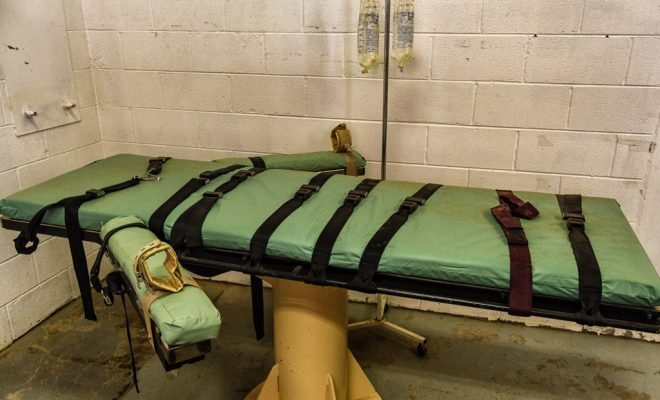 Death Is Different: Restricting the Sale of Lethal Injection Drugs

According to a long line of Supreme Court cases, death is different. Because it is the ultimate penalty, every aspect of a trial and sentencing are subjected to the highest levels of scrutiny when the death penalty is involved. As a society, we fall short of the high standard of care that we hope to achieve in these cases but we instinctively feel that cases involving execution are special.

Much attention is paid to the process of trying, convicting, and sentencing for capital offenses, but recently, attention has also been paid to the execution process itself. In May, Pfizer, one of the largest pharmaceutical companies in the United States, announced that it would be taking steps to block states from purchasing its drugs for use in executions. Some states feel that only lethal injection is an appropriately humane method. Some allow the use of the electric chair as well. In Utah, the use of a firing squad is once again an option. For states that do not allow methods other than lethal injection, these restrictions are creating a shortage of the cocktail of drugs involved, impacting the state’s ability to execute those they have sentenced.

Blocking states’ ability to purchase these drugs limits their ability to execute those convicted of capital crimes by that method but it merely delays these executions until other methods can be approved or the drugs are acquired some other way. It isn’t an effective method for changing capital punishment as a policy. But companies in the United States, and all over the world, have used their power to refuse to sell these drugs to protest the death penalty with mixed consequences.

Lethal injection as a method of execution is surprisingly complicated. One would think that the process of killing a prisoner would be simple, but in most states that is not the case. Executions typically involve a cocktail of three different drugs. First a sedative, typically some kind of barbiturate, to render the condemned unconscious. Then a paralytic, which affects one’s ability to breathe. Finally, potassium chloride to stop the heart.

This Forbes article goes into detail regarding the specific drugs and their effects on the human body, but essentially, the potential to cause suffering through misapplication of this method is very high. In the video below from CNN, Dr. Sanjay Gupta also gives a brief explanation of the process here, specifically in regard to the “botched” execution of Clayton Lockett.

As explained in the video, the execution process failed to go as planned even though Oklahoma was following a protocol that had been approved and is not considered to be inhumane. In fact, the Supreme Court recently upheld the protocol–specifically the use of the drug midazolam as the sedative–finding that it is not in violation of the 8th Amendment prohibition against cruel and unusual punishment. Oklahoma increased the amount of that drug used in its executions since the Lockett execution, but the essential three-step drug protocol is the same.

This is the central problem that Pfizer is trying to address with its sales ban. Like other companies and the European Union, which also bans the sale of drugs used in executions to state facilities, Pfizer does not want its products used to carry out executions. These products, Pfizer argues, were meant to promote health for its clients and using them in an execution is antithetical to its purpose as a company.

But these efforts, although they may assuage the consciences of the companies and nations that employ them, are not without cost. They make it just difficult enough for states to acquire these drugs that the process becomes less transparent and more dangerous, but not difficult enough to stop executions altogether. States have come up with various methods to circumvent these restrictions. For example, reviving the firing squad as an option in Utah is in part a response to the difficulty getting lethal injection drugs.

States also now turn to “compounding pharmacies” to get the necessary drug cocktail. These companies purchase the drugs by themselves, since the state cannot buy them due to company restrictions, and combine them for use in an execution. They aren’t regulated to the same degree as a traditional pharmaceutical company, which means figuring out how effective the drugs will be in making execution as humane as possible is more difficult. States also may try to use straw men purchasers in order to get the needed drugs.

In order to facilitate these executions by lethal injection, as opposed to another method such as the electric chair, Virginia and a few other states have proposed allowing pharmacists who assist the state to remain secret. This video provides some of the arguments against this proposal and a look at some of the legal issues surrounding it.

Allowing pharmaceutical companies who assist the state in executions to remain secret or to hide the sources of the drugs creates a host of concerns. Firstly, it prevents lawyers from getting the necessary information to challenge an execution that they feel was cruel and unusual. They won’t be able to get evidence about the protocol used in that particular execution, making it harder to stop a protocol from being repeated the future. Secondly, it prevents lawyers from finding out where the drugs are coming from before the execution as well, so they would be unable to challenge the use of drugs from a company that had a history of errors in other medical contexts.

It also eliminates the fear of being sued or criminally charged for mistakes made in the preparations of the drugs, which is one of the most powerful incentives for pharmaceutical companies to behave properly. In the absence of adequate regulation, the power to be economically damaged by a lawsuit is one of the ways that consumers can ensure product safety. Getting rid of that tool for death penalty drugs could allow the negligent behavior to go unchecked. While there are lobbying groups who oppose the death penalty that put pressure on pharmaceutical companies, there is not the same widespread social concern for this issue that would give companies an incentive to be responsible, for fear of a boycott, as there would be for a product like aspirin. The heinous nature of the crimes that these prisoners have committed means that many people aren’t concerned about whether they are executed humanely. Even in cases where the execution was extremely painful, so-called “botched” executions, it isn’t a top priority for most to change how we execute criminals.

Moves by pharmaceutical companies to prevent their drugs from being used in executions has sparked an interesting debate. Most would argue that they should have the right to restrict these sales, but in doing so they are actually increasing the likelihood that states will botch executions. Several executions have been delayed but a state is more likely to turn to a compounding pharmacy or get the drugs from another state than it is to revert to an alternate method of execution. So far only Utah and Oklahoma have gone outside the box–with firing squad and gas chamber respectively–that our interest in “humane” executions has placed us in. We tend to think of lethal injection as the best method because it is the most medically supervised and modern practice used. But 7 percent of executions by lethal injections are “botched,” meaning 7 percent of the time someone made a mistake that could have left the prisoner sensible to pain or prolonged their death for many minutes or hours. Although it is less often used, the percentage of botched firing squad executions is zero.

Despite its cheapness and efficiency as a method of execution, the guillotine has not seen a resurgence of popularity either, although it was originally invented as a more humane alternative to hanging as a means of execution. If the condemned were acting rationally they would choose the guillotine rather than lethal injection as their method of choice because, like a firing squad, a prolonged execution is less likely. From that viewpoint, it is a more humane method. Yet we continue to employ lethal injection because it is considered a more humane method by the observers.

There is a case to be made for pharmaceutical companies to work together with states. If these companies want to improve humane executions, while keeping the death penalty intact, working with states rather than against them might be the best option. Pharmaceutical companies have access to the best research available and thousands of drugs that are used in life-saving therapies that might be helpful in executions as well. When companies decide to restrict the use of their drugs for executions, advocacy groups generally applaud them, but they may want to work together to improve the current system first. If lethal injection is really the best method, then these companies and advocacy groups might be able to better serve the people they wish to protect by advocating for better lethal injections, even if they are continuing to advocate for an outright ban at the same time.

Pfizer’s announcement has been ridiculed by many as simply a PR move to appeal to a constituency that opposes the death penalty. Especially since those who support the death penalty don’t typically care enough about it to protest a company that opposes it. It is impossible to know if Pfizer’s concerns are genuine but they aren’t alone in their attempts to ban the use of these medications in a practice they find unethical. Companies commonly take moral stands on issues and either grant or refuse their support based on those values. But Pfizer and companies like it may be doing more harm to their cause than good. Rather than forcing states to make an end-run around their restrictions, thereby making executions less transparent and less humane, pharmaceutical companies should work with states to ensure that their products are being used as humanely as possible.

Forbes: The Pharmacology and Toxicology of Execution by Lethal Injection

NPR: Supreme Court Says Oklahoma’s Use of Midazolam in Lethal Injection Is Legal

Wall Street Journal: Pfizer Tightens Controls to Block Use of Its Drugs In Executions

New York Times: Pfizer Blocks the Use of Its Drugs in Executions

Atlantic.com: The Case For Bringing Back the Guillotine

Mary Kate Leahy
Mary Kate Leahy (@marykate_leahy) has a J.D. from William and Mary and a Bachelor’s in Political Science from Manhattanville College. She is also a proud graduate of Woodlands Academy of the Sacred Heart. She enjoys spending her time with her kuvasz, Finn, and tackling a never-ending list of projects. Contact Mary Kate at staff@LawStreetMedia.com
Share:
Related ItemsCapital PunishmentDeath PenaltyDrug CompanyExecutionLethal InjectionPfizer