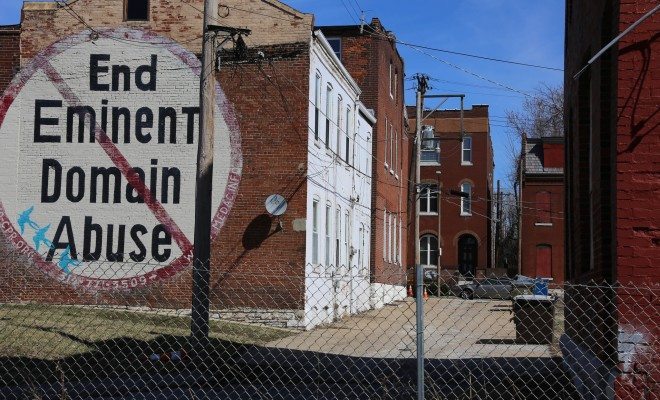 Blighted: What Exactly Is Eminent Domain?

Normally, eminent domain does not get a lot of discussion in presidential politics. In fact, outside of a relatively small circle of interested parties and intellectuals, it doesn’t get much discussion at all. The last time it got this much attention was a decade ago in the case of “Kelo v. City of New London” where the concept of eminent domain and the Takings Clause got to experience their moment in the sun.

The rise of Donald Trump as the probable if not presumptive Republican nominee for the presidency has brought this issue into the spotlight once again. Generally speaking, conservatives tend to be critical of the concept of eminent domain but Trump has professed the viewpoint that without eminent domain civic projects that we value would be impossible to complete.

But what exactly IS eminent domain? And the more interesting question: what should it include?

Pleading The Fifth: The Takings Clause

Eminent domain is basically the idea that the government can, in a specific set of circumstances, take your property.  The Takings Clause, which is a part of the Fifth Amendment that rarely gets invoked in movies or television prohibits the government from taking property unless certain criteria are met. The clause reads, “nor shall private property be taken for public use, without just compensation,” which is not a purely semantic distinction. Even those who support eminent domain would acknowledge that it is a violation of your property rights.

Land use law spends a good chunk of time on the Takings Clause, going through each of these elements. Over the years, the Supreme Court has had to define what private property is (while it seems simple enough, does it include the airspace above your house?), when it has actually been taken (in honor of the late Justice Scalia Google “regulatory takings” and “Lucas v. South Carolina Coastal Council”), and what is a public use. This is where much of the discussion of eminent domain has focused on recently in the presidential debates. In the video below you can listen to Jeb Bush and Donald Trump discussing the issue of eminent domain in regards to Mr. Trump’s conservative credentials and real estate dealings.

It may take a minute to unpack some of the arguments that are going on in this clip. The first discussion is whether the concept of eminent domain, where the government may take someone’s land for public use, is a good thing. There’s also whether it is consistent with “conservative” principles. Mr. Trump uses the example of a hospital as a public use and states that it would be impossible to build things like hospitals without eminent domain.

That’s probably true. If the government did not have the power to seize property (both the federal government and state governments have this power) then any private citizen who owned property where the government wanted to build a hospital could either refuse to sell and thwart the project or hold out for such an exorbitant price that it would make any new project too expensive to be undertaken. While it certainly wouldn’t be an irrational reaction–who wouldn’t want to sell their home for 100 times what it is worth?–it wouldn’t be a very civic-minded response and ultimately we would have fewer hospitals.

Keep in mind that the government does not just take your house. If it takes your property it does pay you for it, so it isn’t all bad news. Collectively, we have decided that we are willing to have a few of us get forced to sell our property, as abhorrent as that is to the American psyche, in favor of having things like hospitals and roads.

The second argument comes on the tail of the first–once we have decided that for a public use we are going to allow this violation of our property rights–what is a public use?  Hospital, yes fine. But what about parking spaces for your limousine?

Although neither one references it, Governor Bush and Mr. Trump are having what I presume is a more spirited version of the in camera arguments that the Supreme Court had in “Kelo v. City of New London.” Things like hospitals, roads, and bridges are recognized by the majority of people to be public uses. But in the Kelo Case, the government was arguing that its plan to develop the land for the City of New London’s economic benefit was a public use. The government didn’t need to build an actual public structure, like a bridge, to be a public use, it just needed to be something that was benefitting the public as a whole.

The Supreme Court agreed with the city and ruled in its favor–an economic benefit to the public can be a public use.  And the government can take a piece of property (again, they do have to pay you something!) and then sell or contract with a developer, such as Mr. Trump, to build on the land.

Another dispute over eminent domain occurred in Lakewood, Ohio. As “60 Minutes” notes, the city of Lakewood wanted to take the Saleet family’s house in order to put in condos and a strip mall. While the Saleet family eventually won their dispute, allowing them to keep their home, the questions at the intersection of eminent domain and economic development remain difficult to answer.

This expansion of the understanding of what constitutes a public use has been met with opposition from people of various political stripes. One group, the Institute For Justice, which is a self-described libertarian public interest law firm, has been very active in pushing back against this understanding of “public use” believing that it is an infringement on property rights. In the video below the Institute for Justice explains some of the responses from state governments and individuals to the Kelo decision.

The Supreme Court in Kelo found the comprehensive nature of the city’s plan to develop the area to be a persuasive argument in favor of characterizing it as a public use. It wasn’t just building one hotel on the property and calling it a day, which may distinguish the issue in Kelo from other cases in the future where the government wants to get rid of a single “blighted” property in favor of a “better” economic option. This is what Governor Bush implies that Mr. Trump tried to do. But, in fact, they are having two separate arguments.

Mr. Trump’s attempt to buy property has nothing to do with eminent domain and linking his attempt to get someone to sell him their home so that he can expand on his existing property or build a new one mischaracterizes what eminent domain is. Eminent domain is purely government action. Not action by private citizens. Mr. Trump isn’t using eminent domain when he makes an offer on a property so he can build a hotel. Even if he uses, as is alleged, strong-arm tactics against elderly widows. His actions aren’t a government curtailment of property rights but rather a use of his property rights–any and all elderly widows that he might try to buy land from have the right to refuse his offer if they want to. It is their property to sell or not sell as they see fit. So talking about Trump’s behavior doesn’t really make sense in a discussion about eminent domain and what is or should be legally acceptable for government action.

Others would argue that government is in the business of promoting good ideas, or at least it should be. And taking an area that is economically “blighted” and turning it into a collection of homes or businesses that improve the community is a good use of the government’s time and energy. We can’t let holdouts, whether they are doing so because of an intense love for their particular house or for an incredibly generous pay-day, halt economic progress that would benefit everyone in the community. They argue that the government needs to be able to promote not just the structural necessities of public life (a road or a bridge) but also the broader concerns that affect the quality of life. After all, people probably claimed back in the day that a hospital wasn’t a public use either, since it isn’t a strictly necessary structure. Yet now a hospital would be generally accepted by all but the most dyed-in-the-wool libertarians as a fair use of eminent domain. This is just the modern evolution of the concept of public use.

Eminent domain is sort of like taxes. Nobody necessarily wants to pay them but we all know that we need taxes or there would be potholes everywhere–the government wouldn’t be able to do anything. Even if we think of taxes as state-sanctioned theft, we let it go because “taxes are what we pay for a civilized society.”

There is a sliding scale–from a bridge to a hospital to a strip mall–and most may go along with it to the hospital but no further. Economic development is great and should be encouraged. But allowing a forcible purchase of property by the government to promote positive development is a bell that you can’t un-ring. It may not be the most interesting issue to think about (and certainly it isn’t the most interesting issue where Mr. Trump is concerned) but eminent domain is government power with very real immediate and future consequences that warrant discussion.

Washington State University At St. Louis: A Brief History of The Takings Clause

Department of Justice: History of the Use of Federal Eminent Domain

Mary Kate Leahy
Mary Kate Leahy (@marykate_leahy) has a J.D. from William and Mary and a Bachelor’s in Political Science from Manhattanville College. She is also a proud graduate of Woodlands Academy of the Sacred Heart. She enjoys spending her time with her kuvasz, Finn, and tackling a never-ending list of projects. Contact Mary Kate at staff@LawStreetMedia.com
Share:
Related ItemsConstitutionConstitutional LawDonald TrumpEminent DomainJeb BushKelo v City of New LondonLawProperty RightsTakings Clause