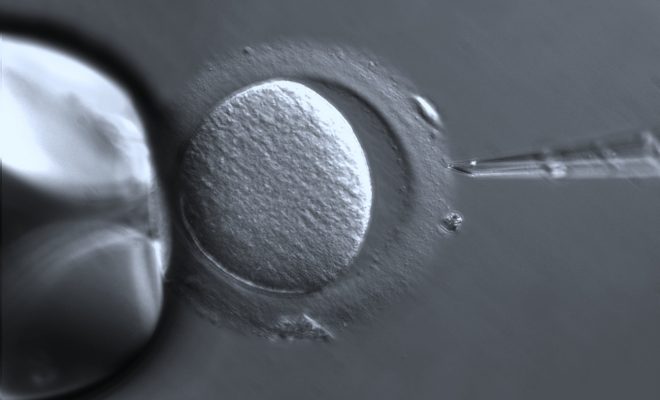 "Oocyte with Zona pellucida" courtesy of [ZEISS Microscopy via Flickr]

Three-Parent Embryos: How Far Should We Take the Miracles of Modern Medicine?

We now know more than ever before about the relationship between our genetic heritage and disease. In previous centuries humans barely even understood the process of how an embryo was formed, or who a fetus “belonged” to. One of the most popular theories, posited by Aristotle, was that all of the genetic information to create a person was contained within the father’s sperm. The child’s mother was merely a vessel for its gestation, providing the raw physical material but nothing more.

Today we know that we inherit genetic information from both of our parents. This genetic inheritance can be a blessing, such as inheriting a combination of immunities that leave us less vulnerable to a variety of pathogens than either of our parents. It can also be a curse, passing on debilitating diseases that can kill or disable, as is the case with Huntington’s disease.

Scientists have been able to identify over 200 diseases that are passed down from a mother through the mitochondrial DNA in her egg. They have also developed a technology to prevent this DNA, and therefore these diseases, from being inherited. But in order to do that, they need to create something that was not possible in Aristotle’s day. A child with three parents.

Its use for tracing human migration, and the diseases that damaged mitochondrial DNA can cause, are the main contributions of mitochondrial DNA. It isn’t a very significant percentage of your genetic inheritance, only containing 37 genes, compared to the more than 20,000 genes that humans possess. However, these genes can cause seizure disorders and the disintegration of brain tissue in some of the most serious illnesses that they trigger. Women who have faulty mitochondrial DNA were previously unable to have healthy, genetically related children. But with modern technology that is now possible.

How Do We Get Three-Parent Embryos?

The mother, or “primary mother,” has her egg harvested and the nucleus is removed. The “secondary mother” donates her egg as well, and the nucleus from this egg is removed and replaced by the nucleus from the primary mother. This egg is then fertilized by sperm. The resulting embryo has the genetic information from all three parents. Take a look at this CBS Sunday Morning video which gives a brief explanation of how the process works. It also alludes to the technology’s future implications.

There are several caveats to the use of this technology. The first caveat is that, unfortunately, that it does not guarantee a disease-free child. Up to 4 percent of the mutated DNA in the primary mother’s mitochondria can transfer into the embryo. Meaning that it is still possible for the child to inherit the diseases that the procedure was designed to eliminate. The risk is significantly lowered, but still exists.

There are also some who suggest that investment into this research is misplaced. Mitochondrial disorders affect a very small percentage of people and keep only a few women, statistically speaking, from having children that are genetically related to them and also free from disease. If a woman knows that her child would inherit her damaged genes and likely develop a disorder she can still have a child, just not one that shares her genetic makeup. Research that helps treat these diseases would be better. Better still would be research that focuses on diseases that affect greater numbers of people where investments would get more value in the reduction of human suffering.

Additionally, our understanding of the relationship between genes and inherited traits is imperfect. We can trace certain diseases back to mitochondrial DNA and we know that the disorders they cause are directly related to the inheritance of those genes. But the interplay between the genes we inherit and the traits that develop is not always clearly understood, and manipulating them may prove to be more art than science. We may have the best of intentions to eliminate these diseases but the technology we use to do it could cause other problems that we cannot foresee.

Some scientists fear not only that we may inadvertently create other disorders with gene manipulation, but that we might be tempted to go beyond the elimination of disorders and start trying to select for “desirable” traits. On PBS News Hour, scientists discussed some of the implications of this technology as it evolves.

The ability to create a child with three parents (although since the genetic inheritance from the “secondary mother” is so small that may not be a fair characterization) would have seemed like science fiction 20 or even 10 years ago. Just as the technology to implant an embryo from one woman into the womb of another was unimaginable… right up until the moment it became reality. Scientists who are advocating restraint–those who fear that we may be tempted to use this technology to manipulate traits so that children can be custom designed by wealthy parents–are speaking about an outcome that is not possible. Yet. And while they may sound paranoid, the time to worry about the ethical implications of a new medical breakthrough is, ideally, before it becomes a reality. Not when the genie is already out of the bottle.

The technology that scientists are worried about is “gene editing.” It sounds even more like science fiction than a three-parent embryo, but is quickly becoming scientific fact. In April, Chinese researchers were able to alter a gene in non-viable human embryos that dealt with human resistance to HIV.

Instead of replacing one of the cell’s pieces, as is done in mitochondrial DNA replacement therapy, gene editing actually manipulates the genes that are inherited. Mitochondrial DNA replacement therapy is kind of like getting a donated organ. Your liver is malfunctioning and so a donor gives you their liver. Or, in the case of a live donor, a lobe. The science is not changing the essential character of a human liver and it is a classic caveat emptor situation. You’re getting the liver you’re getting, with any of the attendant issues the new liver may possess, and no guarantees. But gene editing is more like a scientist looking at your malfunctioning liver, saying ‘we can do better,’ and using science to modify how the human liver functions. It is much more exciting, much less predictable, and much more like “playing God.”

The danger in the three-parent embryo technology is not so much the abuse of this technology. Other than the transfer of the nucleus into the donor egg the process is not “designing” a child any more than in-vitro fertilization does without a mitochondrial donor. Not that the process of in-vitro fertilization is without ethical quandaries, for there are many who think that this technology is immoral. But the debates on the ethics of in-vitro fertilization center on the creation of embryos that may never be implanted and the alleged selfishness of investing so much in being able to have a biological child when adoption remains an alternative. However, the ethical debate over mitochondrial DNA replacement is focused not on the danger in this technology but in the next technology that it will enable. This could be a situation where we are not merely trying to keep embryos from inheriting a disease but actively trying to modify how the human body responds to its environment.

Here in the United States, the use of mitochondrial replacement therapy was recently deemed ethical, at least for the creation of male embryos, but the therapy is unlikely to be experimented on soon. This is because male embryos will never be able to pass on mitochondrial DNA to their offspring. As a result, any inadvertently created errors won’t affect the next generation, which is a reasonable precaution which gives one pause about what “errors” we could create that affect the current embryo. The FDA has not approved it for clinical trials, but last year the technology was approved for clinical trials in the U.K. for embryos of either gender. Whether these trials–and the possibility for women with mitochondrial mutations to have healthy, genetically related children–are worth the Pandora’s box they open remains to be seen.

Goodreads: The Gene: An Intimate History

NPR: Babies With Genes From 3 People Could Be Ethical, Panel Says

Mary Kate Leahy
Mary Kate Leahy (@marykate_leahy) has a J.D. from William and Mary and a Bachelor’s in Political Science from Manhattanville College. She is also a proud graduate of Woodlands Academy of the Sacred Heart. She enjoys spending her time with her kuvasz, Finn, and tackling a never-ending list of projects. Contact Mary Kate at staff@LawStreetMedia.com
Share:
Related ItemsEmbryoGenetic DiseasesIn-VitroMitochondrial DiseaseMitochondrial DNA Replacement TherapyThree-Parent Embryos