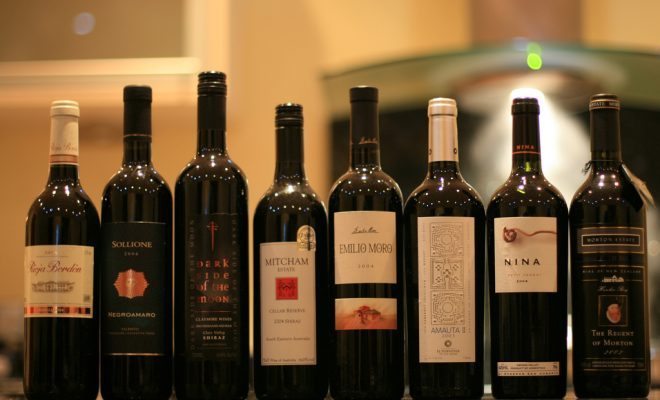 The Science of Wine Tasting

Wine tasting can be an abstract art. As the pourer dribbles a tragically small amount of wine into your glass, you glance at the tasting notes. You definitely taste the dark cherries. After another sip you detect leather and possibly a hint of dirt.

Your friends think you’re a wine tasting genius. But truthfully, you kind of just made all of that up. In fact, while drinking the same wine alone later on, you start to wonder if it ever tasted like leather at all. Maybe you were just carried away by a tide of wine snobbery. It’s been known to happen.

Your wine tasting experience can be more than just an effusive bubbling of wine poetry. While wine tasting is an art, science explains everything you see, smell, and taste. Here’s what you need to know about the science of wine tasting to back up your assertions.

How to Taste Wine

Before we get into the science behind wine tasting, let’s review how to do it. Winefolly.com has an excellent infographic with some basic steps to keep in mind when wine tasting: look, smell, taste, and conclude.

Now let’s find out what scientific factors contribute to each step.

When you look in your glass, your wine should be red, white, or something in between. Step one complete. Now, why the different colors when all grape juice is essentially clear? The answer lies in grape skin.

Grape skins contain little compounds called anthocyanins. During winemaking, acids in the wine react with anthocyanins to produce velvety red hues. The acid level of the wine is especially important in achieving this red color; when anthocyanins meet an alkaline solution, they’ll produce completely different colors like blue and green. Anthocyanins are highly reactive, they’re even responsible for the changing colors of autumn leaves.

Anthocyanins continue their complex reactions during aging, forming complexes that create subtle differences in wine color. While anthocyanins decrease over time, the complexes they’ve formed ensure the wine will stay a shade of red.

Many other subtle factors contribute to the range of red wine colors you see, including:

To make white wine, juice is pressed and separated from the skins very early on and no red pigmentation develops. For a rosé, winemakers leave skins in the grape juice for a short time.

What to remember? Grape skins, and the reactions among different compounds they contain, determine wine color.

Wine aroma stems from the complex interaction of volatile compounds present in the wine.

When you smell a glass of wine, odor-active volatiles travel through your nose and connect with odor-binding proteins in your olfactory epithelium, or the area in your nose that recognizes odors. From there, receptors pass the odors onto the brain for processing and interpretation.

But there’s more to the aromatic experience than the first smell. Much of the liquid’s perceived aroma releases after you swallow and exhale. The motion releases even more aroma compounds into your system.

Variations in the enzymes, microflora, and mucus in your mouth further complicate aroma, altering how different people perceive odors. So aroma might be relative after all. It’s one of the most abstract aspects of tasting wine.

You can make wine tasting more concrete by recognizing and articulating what you smell. Ann C. Noble’s wine wheel will help you do this. She took information from several wine descriptive analysis studies and picked concrete terms over abstract ones to create the wheel. Take a look at the video below for more information on the wheel.

Aroma judgement might also be clouded by other senses. Researchers from the National Institute for Agronomic Research in Montpellier, France found that perceived smell is highly influenced by appearance. They noticed that wine critics frequently used red or dark objects to describe the smell of red wine, like raspberries or tobacco. The critics similarly used golden hues as descriptors when tasting white wine, like honey and apricots. When they asked students with little wine-drinking experience to describe wine, they saw similar results.

Then the researchers gave subjects two white wines, one of which had been colored with unobtrusive red dye. The subjects still described the disguised white wine in terms of red-hued objects, proving that our noses might be highly influenced by our eyes.

What to remember? Just because the person next to you smells asparagus doesn’t mean you have to. If they try to argue with you, tell them that wine aromas are subject to complex interactions of volatile compounds that people perceive differently. You could both be right.

Now it’s time for the best part–the tasting. But how did the wine in your glass end up tasting so much different from the grape juice it once was? Wine is made through an intricate series of interactions between different compounds in grapes. These compounds are released and heightened during various winemaking processes like crushing, fermentation, and aging.

Since many compounds are released and intermingle in the process of making wine, it’s hard to pinpoint a flavor or aroma to its chemical cause. But knowing some of the basic compounds is step one. The chemical classes of compounds found in wine include esters, alcohols, acids, lactones, carbonyl compounds, acetals, phenols, sulfur-containing volatiles, nitrogen-containing volatiles as well as other miscellaneous substances. Below are some examples of how different substances affect the flavor of wine. (Please note that aroma and flavor are closely linked. Many of the compounds below contribute to both the flavor and aroma of wine.)

That was just a sampling of the compounds that interact in a glass of wine to provide the symphony of aromas and flavors you experience. In addition to the interactions of compounds, tiny variations in fermentation and an individual’s unique flavor receptors further impact perceived flavor. That’s why two people can taste two different things in the same bottle of wine.

What to remember? Wine can contain a full range of robust flavors that taste like anything from vanilla to green beans. It’s not because wine is stuffed with additives, these flavors are a result of natural compounds interacting in the magic of wine making.

Why do we put wine in barrels?

Any wine tasting will inevitably include what sort of barrel or tank the wine was aged in, including where it came from. But what does it mean?

Even when wine is in a cask or a barrel, it’s changing chemically and absorbing qualities of the wood. The barrel’s wood contains compounds and tannins of its own that influence the wine. Barrel wood contains the following:

As no two trees are the same, no two wine barrels will be exactly the same. Different types of wood are know for different characteristics, such as those described below.

Apart from these reactions, wine slowly and slightly oxidizes in the barrel. This tames bitterness and can often change color. Aging wine in stainless steel doesn’t produce nearly as many reactions. That type of container is typically used to preserve the unique flavors of the fruit and keep all oxygen out.

Terroir refers to the conditions that grapes were grown in including soil, sunlight, and water. Many believe the grapes’ milieu contributes to the final flavor of the wine. The word terroir originated as a name for soil, but it turns out wine terroir might be more dependent on climate than dirt.

Some experts argue that climate might have more impact than soil because it’s very difficult to prove that vines absorb minerals from the ground. Rocks and soil would have to undergo multiple reactions for their elemental particles to become soluble. From there, they would have to get to the vine’s roots and then to various parts of the grapevine. Fermentation and other winemaking processes could mask any small effect the minerals in soil had on the vine.

None of these speculation are conclusive and even geologists are getting into the terroir mystery. This would just be a fun tidbit to throw out if the subject comes up.

Whoa whoa whoa, what about the swirling?

Don’t worry, swirling wasn’t invented just to make you spill wine on yourself. Swirling and aerating exposes wine to oxygen, which is actually good just before tasting. The actions lead to evaporation. In this case, undesirable compounds like sulfites, sulfides, and ethanol typically evaporate first. These substances can make wine smell rotten or taste too alcoholic. Exposing the wine to oxygen before sipping helps to decrease these bitter notes.

Conclude (AKA Talk About it Pompously)

This is when you leverage what you know about wine tasting to have a grounded discussion instead of indiscriminately spewing impressive adjectives.

Let’s go back to the cherry-tobacco-dirt wine we started with. Now you can explain to your friends that its brilliant ruby color is a result of grape skin compounds called anthocyanins. You can tell them you’re not just swirling your glass to look cool, but to get rid of sulfides and other potentially bitter compounds. Explain that the dark cherry flavor is probably a result of esters reacting with acids in the wine. And that dirt smell? Let’s call it earthy and chalk it up to just the right amount of the organosulfur compounds.

Every glass of wine is full of science. Chemical reactions in every step of the winemaking process work in unison to produce the magical liquid set before you. Even if your palate needs work, appreciating the scientific wonder in wine is the first step toward becoming a true connoisseur.

Analytical and Bioanalytical Chemistry: Beyond the Characterization of Wine Aroma Compounds

PLOS One: How Subtle is the “Terroir” Effect? Chemistry-Related Signatures of Two “Climats de Bourgogne”

New Scientist: A Whiff of Untruth

Nature: Alcohol and Science: The Grapes of Rock

Wine Folly: Where Wine Flavors Come From: The Science of Wine Aromas

Wines and Vines: Exploring the Science of Terroir: Science May Support Link Between Climate and Wine Quality–Not Soil-Minerality

Practical Winery: Persistence of Vegetal Characters in Winegrapes and Wine

Ashley Bell
Ashley Bell communicates about health and wellness every day as a non-profit Program Manager. She has a Bachelor’s degree in Business and Economics from the College of William and Mary, and loves to investigate what changes in healthy policy and research might mean for the future. Contact Ashley at staff@LawStreetMedia.com.
Share:
Related ItemsAcidsLookRedSmellTanninsTasteTerroirWhiteWineWine Tasting