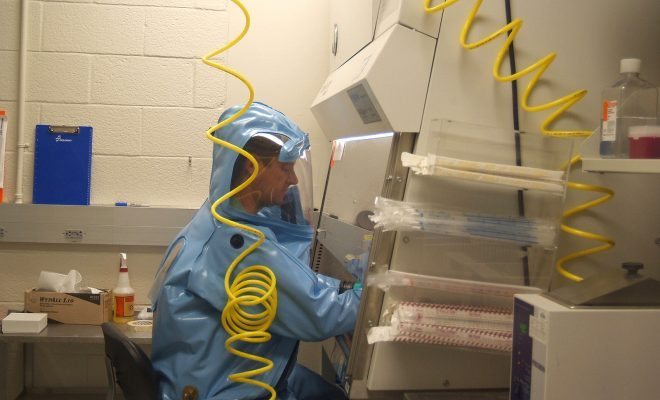 Is the Key to Surviving Ebola in Your Genes?

Is whether or not you survive Ebola all about your genetics? A new study on mice indicates that it might be. Scientists found that certain genetic factors determine if the disease manifests as mild or devastating.

To reach this conclusion, scientists injected mice with the same strain of Ebola that caused the 2014 West Africa Outbreak. The expressed severity of the disease among the mice was scattered although they were all injected with the same unaltered and unmutated strain. Why did some resist the disease while others surrendered?

One correlation posits a provocative answer. Scientists noticed a strong correlation between symptom expression and the genetic lines of the mice. Dr. Michael Katze, a researcher on the project, declared that their data suggest disease outcomes are largely dependent on genetic factors.

It seems that the genes of the mice determined their immune response. In some mice, the genes that promote blood vessel inflammation and cell death became agitated and ultimately these mice succumbed to the disease. In other mice, the white blood cells were more lively and the genes that promote blood vessel repair were activated. These mice were able to fight back. As they observed the mice over multiple generations, they found that the ability to survive was tied to genetic lines. The continuous correlation of immunity in genetic lines presents a puzzle. Did the mice pass specific immunity on to their offspring?

Immune responses to specific pathogens, like Ebola, only develop after exposure. Specific immunity is an acquired trait, and so far, science has told us that acquired traits cannot be passed on through DNA. Traits we acquire in our lifetimes are not written into DNA and therefore not built into genes. Acquired traits result from environmental influences, like memories or even tans. If you’re a bronze goddess while pregnant, you won’t have a baby with a gorgeous tan.

So it is intriguing to think that mice who were exposed to Ebola had somehow passed on their specific, acquired, immunity to offspring through their genes. Below we’ll explore the possibility of inheriting acquired immunity.

We’re all born with an innate immune system. It’s responsible for the classic immune response that recognizes and eliminates foreign invaders with the help of killer cells and cytokines. Skin, mucus, cells, and molecules all present at birth innately protect your body from foreign pathogens. Think of any computer you buy. It comes with a built in operating system. But that doesn’t mean you can’t upgrade, right?

Environmental factors prompt us to make little upgrades to our basic innate immune system like we do to our computer’s operating system. This is called adaptive or acquired immunity. Adaptive immunity activates in response to a specific problem that the innate immune system isn’t able to overcome. As it works, it also forms memories, so it can remember how to fight a specific pathogen if it ever returns for vengeance. A classic example is the Chickenpox. It doesn’t take much for most people to catch it the first time, but after that, many are resistant for life.

Acquired immunity, like other acquired traits, is not inherited. Even though you might have had the chickenpox, your kid will probably still get it, just like they can’t inherit your amazing tan or stellar vocabulary. With that said, we return again to the mice in the study above. Is it possible that they passed on their acquired immunity to their offspring?

“Lamarck-y” malarkey! Or maybe not….

If you’re intrigued by the study above, one historical figure would be absolutely riveted. Jean Baptiste Lamarck had this idea a long time ago — in 1801 to be specific. He theorized that evolution takes place when species develop traits to adapt to their environment and then transmit those adaptations to their offspring. Per his theory, giraffes developed long necks to feed from the tallest trees and then passed the “long neck” trait to their offspring.

Somebody else thought that evolution occurred in a different way. Charles Darwin proposed that evolution occurs through random mutations that bestow a competitive advantage for survival over a long time. Per his theory, the giraffes didn’t develop long necks to feed. It was just that the giraffes that happened to have slightly longer necks were able to survive to make more offspring. Eventually, the long neck became a dominant feature of all giraffes.

Darwin’s theory eclipsed Lamarck’s as the favorite theory of evolution. But were there some nuggets of truth in Lamarck’s musings? A growing body of evidence is creating a whisper of renewed interest in Lamarckian evolution. Collectively, it’s a young field called epigenetics.

For example, observations of starving Dutch mothers during the famine of World War II revealed that they had offspring and grandchildren more susceptible to obesity. Experiments on rats have found that obesity in mice might be caused by the high fat diets of their fathers. And there’s more where that came from.

The proof is in…the roundworm?

Dr. Oliver Hobert was curious to find out if Lamarck might have been right about the heritability of acquired traits. He suspected that ribonucleic acid, or RNA, and its role in genetic expression might shed some light on the subject.

Hobert was specifically interested in RNA interference (RNAi). Cells use RNAi to turn down or suppress certain genes. Watch the video below to see how it works.

Hobert and his team of Columbia University Medical Center (CUMC) researchers turned to roundworms to study RNAi’s influence on immunity. Roundworms have a unique capacity to battle viruses using RNAi that made them ideal for the study. The team found that a RNA molecule memory of instructions on fighting off certain viruses could be passed on from one generation of roundworms to the next.

Here is a quote from Dr. Oded Rechavi, lead author of the study, courtesy of the CUMC newsroom:

In our study, roundworms that developed resistance to a virus were able to pass along that immunity to their progeny for many consecutive generations.The immunity was transferred in the form of small viral-silencing agents called viRNAs, working independently of the organism’s genome.

More Pieces in the Puzzle

Studies like this one give scientists pause on long standing notions about the heritability of acquired traits and what we know about our genes. While many more studies are needed to completely vindicate Lamarck and his ideas, some puzzling clues are coming together. Here are some highlights from other studies that tackle similar ideas:

SardiNIA Study of Aging: Researchers at the National Research Council’s Institute of Genetic and Biomedical Research in Italy found that genetics play a key role in our ability to fight off disease. According to the study, the immune system has evolved to reject certain pathogens and cancers. The basis of the study is that several adaptive immune cells are regulated by genetics. They found 89 gene variants with significant ties to the production of specific immune system cells.

Chief of NIA’s Laboratory of Genetics, David Schlessinger, Ph.D., sums it up nicely:

If your mother is rarely sick, for example, does that mean you don’t have to worry about the bug that’s going around? Is immunity in the genes? According to our findings, the answer is yes, at least in part.

Natural Environment Research Council UK: This study demonstrates that genetic variations in cytokines are a crucial component of individual variation in pathogen resistance and immune function. During both adaptive and innate immune responses, cytokines carry messages. They directly determine how an immune system will respond to a given challenger. So variations in the genes that control these cytokines, therefore, ultimately affect the immune system.

Analysis of Genetic Variation in Animals: A study of hemophiliac individuals infected with HCV showed that genetic factors determine the outcome of the disease. The researches studied siblings and found correlative rates of disease recovery among siblings was much higher than the pairs of randomly paired individuals, concluding that people who share genes might also share higher resistance to certain diseases.

Innate Immune Activity: Another study looked at the genome sequence that regulates expression of genes involved in the immune system. The study found that sometimes genes of interest reveal themselves when certain cells involved in fighting an infection are stimulated.

Back to the E-word…

Ebola usually depletes a person’s immune cells. Some immune systems stand up against the initial attack and their bodies are able to maintain some immune cells. These people are more likely to survive. We learned from the study on mice that it could be genetic factors that determine the disease outcome. What about people?

One study found that people with certain variations of the human leukocyte antigen-B  gene survived Ebola while those with another variation did not. Another finding deals with a mutation in the NPC1 gene. Cells taken from people with this gene are resistant to Ebola. The mutation is relatively common in certain populations in Europe and Nova Scotia.

More research is needed, but studying these genetic variances might reveal more secrets of why some survive Ebola and others do not.

These findings do more than just play with our ideas of how traits can be inherited. If doctors were able to browse through your genetic catalog of specific pathogen resistance, they could administer therapies that create synergies among treatments. We might be able to predict what ailments you’re more susceptible to and take appropriate preventive actions. We might be able to study the genetic factors that make some people resistant to illnesses like Ebola, and synthesize them to construct even more effective treatments.

Is this science fiction? We don’t know yet, but no theories should be completely forgotten. As we’ve learned from Lamarck, even formerly discarded ideas can make a splash centuries after their inception.

PLOS Genetics: Genetic Diversity in Cytokines Associated with Immune Variation and Resistance to Multiple Pathogens in a Natural Rodent Population

The Royal Society: Variation in Immune Defence as a Question of Evolutionary Ecology

Broad Institute: Scientists Make Connection Between Genetic Variation and Immune System in Risk for Neurodegenerative and Other Diseases

History of Vaccines: Viruses and Evolution

LiveScience: How Do People Survive Ebola?

Research Gate: What is the Scientific Position on the Inheritance of Acquired Characteristics (Lamarckism)?

Ashley Bell
Ashley Bell communicates about health and wellness every day as a non-profit Program Manager. She has a Bachelor’s degree in Business and Economics from the College of William and Mary, and loves to investigate what changes in healthy policy and research might mean for the future. Contact Ashley at staff@LawStreetMedia.com.
Share:
Related ItemsAnimal TestingCharacterChickenpoxDarwinEbolaEpigeneticsGenesGeneticsImmune SystemLamarckMiceStudyTestingTraits