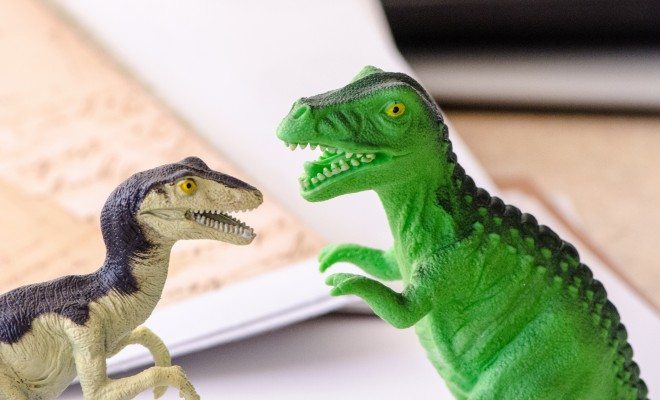 Jurassic Park Realism: What Do We Really Know About Dinosaurs?

Dinosaurs are hard to keep up with despite their extinction more than 65 million years ago. We discover a new dinosaur about every two weeks. Yet experts estimate only 28 percent of dinosaurs that existed have been identified. Frequent  findings bring these animals to life, providing us with clues on how they might have looked and lived.

With these fast-paced discoveries, it should come as no surprise that the original Jurassic Park featured outdated dinosaurs. Audiences were expecting to see some tweaks in the look of the creatures in the forthcoming Jurassic World movie set to release in June 2015.

Disgruntled experts claim the dinosaurs appearing in the trailer are “stuck in the 1980s.” Jack Horner, paleontologist and scientific consultant on the film, isn’t worried. He states that the movie is purely fiction, not a documentary.

As someone who hasn’t given much thought to dinosaurs since elementary school, the outcries made me curious. How much do we really know about them? How do we even know what we do know? I explore these questions below.

How much can you find out from a bone?

Fossils go beyond bones to include anything that provides evidence of prehistoric life. They can be physical remains, trace remains (footprints and teeth marks), animal feces, pollen, spores, or even ripple marks from a long-dry prehistoric ocean.

The paleontologists who study fossils incorporate computer science, archaeology, biology, geology, ecology, anthropology, and more to explore evidence of the past. Like investigators on a crime scene, they detect clues where most people would see rubbish.

What do they look at?

How do they study the fossils?

Fossils are rare, fragile, and require meticulously attentive handling. New, high-resolution X-ray computed tomography (CT) enables scientists to create complete and detailed scans of fossils so they can be examined in new ways by many people without fear of damage. The scans operate like extremely powerful medical X-rays that produce unbelievably vivid images.

To tout the benefits of the technology, Dr. Timothy Rowe uses the example of a dinosaur skull. With the scan, he can cut apart the skull digitally, without harming the fossil to explore different structures that might indicate how its brain worked and so much more.

The Fossil Record: An Incomplete Puzzle

The collective pieces of the dinosaur puzzle are called the fossil record and it’s definitely missing some pieces.

So while we know a great deal from what clues we do have, the clues are patchy. One scientist even estimated that only 2,100 adequate dinosaur skeletons exist. It’s extremely rare to find a whole dinosaur skeleton.

How do we figure out what they looked like?

Using clues from the past and knowledge of modern animals, scientists make educated guesses about what dinosaurs may have looked like.

All reconstructions start with the foundation–the skeleton. It’s rare to find a complete skeleton, so scientists piece together an anatomically correct dinosaur from what fragments and pieces they have along with their knowledge of modern animals. Body parts made from cartilage are never fossilized; we can recreate skeletons, but we don’t know with absolute certainty how their joints moved.

After the skeleton comes the meat and muscle. Markings on the fossils where muscles were attached indicate their past location and size. The fossils tell them where the muscles should go, and studying modern animals helps them determine how much muscle mass to add.

After the basic shapes come the embellishments: skin, colors, feathers, and more. Reconstructing these embellishments is less of an exact science since there is typically less evidence.

Artists do what they can to make their depictions as accurate as possible, but because new developments happen so frequently and art takes time, renditions become outdated at a fast pace.

Thomas Holtz, a University of Maryland paleontologist, walks through some depictions of dinosaurs featured in past issues of National Geographic Magazine to call out what would now be different in artist renditions. Here are just a few examples:

New discoveries happen every day. The dinosaur toys kids are playing with in a handful of years will probably look completely different from the ones we enjoyed.

A Mysterious Future For a Long-Dead Animal

As I mentioned earlier, of all the dinosaur bones that probably exist, only 28 percent have been identified. The potential for future discovery is huge. Even questions that seem simple remain mysterious to us. Were dinosaurs hot blooded or cold blooded? How did they mate? Why did they have horns, spikes, armor, or feathers? We still don’t even know exactly how they all went massively extinct.

The new Jurassic World trailer inspired me to look into what we know about dinosaurs. I found that we know quite a bit, but have much left to learn. Now I’m just wondering what new information we’ll have by the time the movie is released in June.

Smithsonian: Dinosaurs in the Backyard: How Do We Know?

Idaho Museum of Natural History: What is a Fossil?

The New York Times: Many More Dinosaurs Still to Be Found

National Geographic: What’s Wrong With This Picture? An Audio Critique

Ashley Bell
Ashley Bell communicates about health and wellness every day as a non-profit Program Manager. She has a Bachelor’s degree in Business and Economics from the College of William and Mary, and loves to investigate what changes in healthy policy and research might mean for the future. Contact Ashley at staff@LawStreetMedia.com.
Share:
Related ItemsDinosaursJurassic ParkJurassic WorldPaleontologyScienceScientistSkeleton