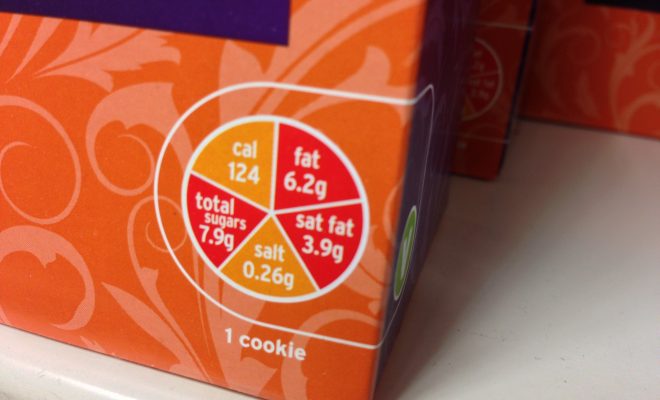 Food Labels: Is the ‘Facts up Front’ System Good for Consumers?

Americans all have different relationships to food. I didn’t know that you could buy applesauce in a jar until I went to college. I was aware that you could get soup in a can but I had never experienced it personally. My mother and grandmother made these things from scratch. So there were no food labels indicating the nutritional value on any of these items, but following Michael Pollan’s advice to not eat anything that my grandmother would not have recognized as food, the nutritional value wasn’t something we worried about calculating with numbers. It just felt wholesome.

However, not everyone has the luxury of making food from scratch. Americans increasingly rely on processed foods to replace or supplement home-cooked meals. These foods are convenient and often a cheaper alternative. In some cases, they are the only option, since many Americans live in “food deserts.” A food desert is a location where grocery stores that carry fresh produce are more than a mile away and residents don’t have access to them via a car or public transportation. Neighborhoods like this tend to have grocery stores that only have processed food options. A lot of food deserts are in urban areas, but there are also some in rural communities as well, because if the nearest store where you can buy a tomato is five miles away and you lose or don’t have access to your car, you have a very long walk to purchase a tomato.

You can actually go to the U.S. Department of Agriculture website and take a look at food deserts around the country.

Since Americans are either being forced–through economic necessity or location–or choose to consume more processed foods, efforts have been made to make the labeling on these foods easier for consumers to understand. The strategy adopted by the White House, as part of Michelle Obama’s efforts to combat obesity, has been to modify our existing food labeling. But there may be other ways to label our food that better informs consumers and encourage them to make different choices.

Our current food labeling method is called the “facts up front” system, which utilizes a black-and-white label on the back of the product, with some key facts also displayed on the front of the product. In the following video, Allison Aubrey of NPR explains some of the changes that were made to the facts up front system that will hopefully make it more user-friendly for consumers.

The two main changes to the labeling system, which are designed to promote healthier choices, are the modifications in serving size and the “added sugar” reference on the label. With the previous labeling system, it was not always clear to consumers that what they consider a “serving” and what a “serving” actually is for the purposes of calculating the calories are rarely the same thing. For example, a 24-ounce bottle of coke, which many adults would drink with their meal and think of as a “serving” because it was in one unit, might actually be 2.5 servings. So the number of calories listed was not the number calories in the bottle, which would be much higher than what people were actually consuming.

The other major modification designed to assist consumers is the “added sugar” valuation. Most people don’t realize that sugar is put into nearly all processed foods, even ones that aren’t sweet. Salad dressing, for example, often has sugar added to it. The added sugar value is designed to alert consumers to the hidden sugars in their foods, which are a huge driver for obesity and other health risks.

These changes to the food labels may, in fact, help consumers make better choices. A majority of Americans do look at food labels when they are deciding whether to purchase a food item, so making sure that they are better able to understand the number of calories and nutritional value of the food they are about to consume may help them avoid (at least most of the time) foods that are unwise to eat. If sales for a particular food decline because consumers are changing their behavior, that may even encourage manufacturers to alter the amount of sugar and fat they use to attract more health-conscious consumers.

But there is another way that we can label our food that might be even more beneficial to the consumer.

This video explains some of the studies conducted that compare the facts up front food labeling system with an alternative option known as the “traffic light” system. As the name suggests, the traffic light labeling system uses red, green, and yellow/orange to indicate that a nutrient level is healthy or unhealthy. For example, a food that has low fat and low fiber would have a green circle that says low fat (which is a good thing) and a red circle that says low fiber (which would be bad). Glancing at it quickly, if you saw a string of red circles on the label you would know that this food should be eaten in moderation or avoided completely. In contrast, a food with a lot of green circles is something that you can eat more frequently.

Here is the good news: both kinds of food labels will be helpful if you are trying to decide between two different kinds of products. If your choice is between a bag of Fritos and a bag of sourdough pretzels then either the facts up front type of labeling or the traffic light labeling is going to help you know which choice is healthier. However, when you are looking at a product by itself and trying to decide if it is a good choice the traffic light system is much better at helping you make an informed decision.

The traffic light system may be of more use to people as they actually shop than facts up front food labels. It depends on how people make their purchasing decisions. If consumers are going to the store and holding two types of bread in front of them to try to figure out which one is healthier, then the facts up front label is just fine. But if they are reaching for a salad dressing on its own, not comparison shopping, a facts up front label may not alert them to the fact that it is a bad choice, whereas a traffic light label with a red warning circle that says “high sugar” may be more effective at steering consumers away from that product. In fact, there is evidence to suggest that a prevalence of red labels will lead to a reduction in purchases, which is why food manufacturers in Europe are resistant to the implementation of the traffic light label system. Its use in the U.K. is voluntary for manufacturers.

The facts up front system actually leads consumers to make the wrong estimates. It encourages people to think there are more good nutrients in a product than there actually are and fewer bad nutrients. Overall, the traffic light label was easier for consumers to understand, since it can be confusing to think about the recommended daily value of a nutrient and to make the necessary calculation. But a red warning on a package is immediately perceived as “don’t eat this!”

It’s unclear how the traffic light system might affect consumers and manufacturers but the system has been used in the U.K. to try to combat label confusion. Ideally, any labeling system that we use should tell consumers as clearly as possible which products are healthy and/or exactly how unhealthy for you a particular junk food is. And hopefully, that would reduce the amount of particularly unhealthy junk food people consume. But a good labeling system will also influence manufacturer behavior and the traffic light system may be even better at that than a facts up front label. Manufacturers may not want to put a series of red circles on their products, increasing the perception that they are unhealthy, so they might modify their product to get the label reduced from red to yellow.

In a perfect environment, the food labeling system could be complicated and consumers would have the time needed to analyze each product for its relative health merits. As a result, they would wisely avoid the foods they should. But we do not live in the perfect environment. Food shopping is something that many consumers engage in almost as muscle memory, relying heavily on brand loyalty and a general feeling that a product is wholesome. Even when consumers look at food labels, which most of them do, they may not understand them. They know that a bag of potato chips is bad, especially when comparing it to a rice cake, but they may not understand just how bad.

A traffic light labeling system should be explored to figure out if it does a better job accomplishing the goals of a labeling system, which are to inform consumers, modify their behavior where possible, and encourage manufacturers to make their products healthier in an attempt to capture market share. We put warning labels on dangerous products like cigarettes, but our food labeling system does not treat sugar with the same level of danger. Given the health crisis that overconsumption of these products has helped to create, perhaps we should.

Mary Kate Leahy
Mary Kate Leahy (@marykate_leahy) has a J.D. from William and Mary and a Bachelor’s in Political Science from Manhattanville College. She is also a proud graduate of Woodlands Academy of the Sacred Heart. She enjoys spending her time with her kuvasz, Finn, and tackling a never-ending list of projects. Contact Mary Kate at staff@LawStreetMedia.com
Share:
Related ItemsFacts Up FrontFood LabelsNutritionObesityRegulationTraffic Light LabelsUnited Kingdom