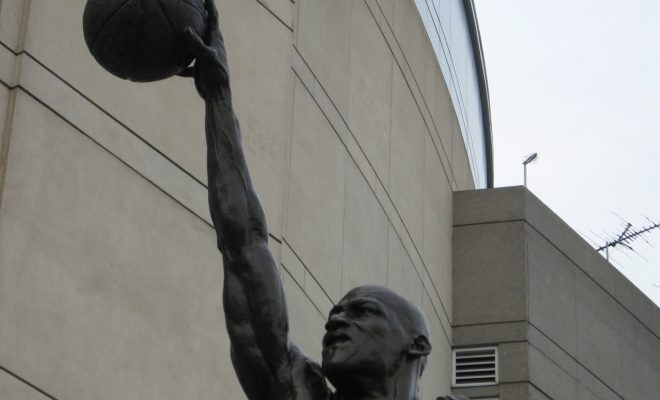 Legacy of the Past? Slavery’s Impact on Modern Black Identity

In the 21st century, African-Americans enjoy more equality and freedom in the United States than ever before. However, in just the past few years, issues of civil rights have once again come to the forefront. The ruinous relationship between young black men and law enforcement has rapidly ascended to the height of public discourse and consciousness–at a level not seen since the 1960s and 1970s. Although there has been robust discussion regarding police-minority relations, a more comprehensive discussion of institutional racism in the media and the black identity it contrives has seldom been had.

Many theorize that this black identity may be a significant impediment to economic mobility within the black community, especially when many black boys will grow up either wanting to be like Michael Jordan or Tupac Shakur. Achieving that level of fame in athletics and music is clearly difficult to accomplish, so when these boys don’t make it, criminality can become a third path that is both viable and desirable. Critics of the black identity argue that possibly it is the legacy of the past that is reinforcing these career paths and preventing progress. Read on to learn about this criticism of the modern black identity, its roots in slavery, and its perpetuation in the media.

Succeeding in sports, particularly basketball and football, is a status symbol in American society as a whole, but even more so in the black community. As John Milton Hoberman states, “the celebration of black athleticism as a source of clan pride exists on a scale most people do not comprehend.” Athletic greats like Muhammad Ali, Michael Jordan, Jim Brown and many other black athletes enjoy a high level of reverence in their cultural community and function as role models for young black males. From a young age black males, many of whom live in areas of poverty, view these athletes and their humble backgrounds as a way out of poverty and the ghetto. They then begin to define themselves in terms of their athletic ability.

As Professors S. Plous and Tyrone Williams of Wesleyan University point out, this emphasis on athletic prowess today is predicated upon the emphasis on physical capabilities which once made slaves valuable. Slaves who were stronger and more physically capable were more proficient in their labor. Similarly, in the 21st century, many argue that too many black teens are infatuated with physical abilities through the medium of sports. The importance of African-Americans being physically more capable began in slavery, but has since evolved into a norm and a source of pride in the black community. There’s a worry that today it amounts to deluding young black male teens into undermining their education in favor of an improbable athletic career. These critics of the modern black identity point out that slaves did not enjoy the luxury of an education. Therefore, quality education is the necessary first step to reform these stereotypes and place black youth on attainable paths to success.

Musical endeavors in the black community are also very common, however, as with sports, the music industry is a difficult field to break into. Nevertheless it is pursued vehemently by black youths. This emphasis on music, according to some, is also rooted in slavery. Slaves used music as a way to retain their African culture and as a coping mechanism to numb the pain of slavery. Author Megan Sullivan describes their negro spirituals as a type of “musical rebellion” in an essay writing,

Subsequent generations of Africans gradually became African-Americans as a rich culture infused with music developed under the harsh conditions of slavery. White Americans considered African-Americans separate and unequal for centuries, going to extraordinary lengths to keep Negroes oppressed and apart. Yet behind the strict, segregating curtain hung between ‘Black’ and ‘White,’ African-Americans created a distinctive music that sank its roots deeply into their American experience and drew from it an amazing evolution of sound that has penetrated that racist fabric and pervaded the entirety of American culture. Music became a way to remain connected to their African heritage while protesting the bleak conditions African Americans faced throughout history. Musical protest took on assorted forms and functions as Blacks strove to advance their social station while simultaneously retaining their cultural heritage.

These songs of slavery create an interesting parallel with rap and hip hop music, which also was conceived in a furnace of racial inequality and oppression, although in inner cities rather than cotton fields. Yet these critics of music’s preeminent role in black culture argue that we must acknowledge that the inner cities require a more nuanced approach to success, and not an insistence on past principles. They argue that historically music was utilized as a means of rebellion and defiance because it was absolutely necessary as millions were treated as subhuman. The argument follows that today’s music, specifically rap, is often used as a means of defiance, but is less needed as there are more constructive outlets now than in the time of slavery. This is especially true as some rap music continues to glorify and condone the third principle, criminality.

Criminality is certainly not praised and revered in the black community as musical or athletic pursuits. However, according to black identity reformers, when the two fail, criminal behavior in many black communities is not only seen as palatable, but glorified, as it represents a form of rebellion against oppression. The emphasis on music, particularly rap music, perpetuates this glorification of criminality and further validates the lawlessness.

Interestingly, this is directly analogous to the conditions of slaves. As Sullivan mentioned, music was a means to organize rebellions and protest for slaves. Indeed the act of responding to oppression through crime as a justification for the lawlessness is also rooted in slavery. In the days of slavery, it was criminal for a black slave to seek liberty and equal rights as delineated in the Declaration of Independence. Since black slaves were strong willed and conscious of their inalienable rights, many valiantly and fearlessly sought liberty even though at that time this constituted criminal behavior. In the same manner that criminality was conceivably deemed desirable by the black slaves seeking liberty, criminality continues to be deemed acceptable by some black Americans today fed up with their disparate equality of liberty, relative to other members of American society. Of course, according to proponents of fundamentally altering the black identity, there is a difference. They argue that in the past civil disobedience and criminality were morally justified, but today are morally ambiguous if not reprehensible.

The Role of Media

According to reformers, media plays a big role in the black community’s continued emphasis on physical and musical capacities, as well as criminality. Possibly some of the most prevalent black individuals on television are athletes and rappers, that latter of whom then-Senator Barack Obama stated, “move our young people powerfully.” Given that poor children–many of whom are black– watch significantly more television than their peers, the types of people they see on television play a more imperative role in their process of socialization.

Media also plays a role in reinforcing the criminality of black males. Stephen Balkaran describes this bluntly saying, “media have divided the working class and stereotyped young African-American males as gangsters or drug dealers.” The portrayal of black males as criminals is already destructive enough in the context of news and film, but it becomes further amplified when artists choose to focus on themes which are criminal in content.

These three identities are not mutually exclusive, making it difficult to eradicate one without eradicating the other. This is observable with rappers who also serve as gangster icons, or black athletes who emulate criminals and rappers themselves. Making distinctions between the three becomes exceedingly difficult, as they are in some ways monolithic and unified; seemingly cornerstones of black culture.

Yet the individuals who embody each precept hardly pay the price, because they are rich, successful, and most of all, lucky. It’s the young teen who attempted to act out the rap lyrics to his favorite song that gets tried as an adult, and it is the 25-year-old former high school basketball star who gets stuck working a low wage job who ultimately suffer. Therein lays the deceptiveness of media portrayal of the three principles. These figures on television are conspicuously wealthy and successful, yet when young impressionable teens attempt to emulate the behavior, they end up disappointed and disadvantaged.

No one is suggesting that a complete rejection of athletics or musical pursuits is necessary or welcomed. Obviously music and athletics are essential components of black culture and of American culture, generally. However, according to this theory of the black identity, the black community may need to recognize that the ubiquitous emulation of athletic ventures, music, and criminality, is not helpful.

In the face of the widespread institutional racism that continues to pervert Americans culture and disadvantage blacks, a more inclusive definition of blackness is needed–one which leaves room for black intellectuals and professionals to serve as apt role models. Once children expand their horizon and realize they are not limited to a binary decision, we will begin to see a widespread economic ascension in the black community that is advantageous to all members of society. America is a multicultural society and there exists social tensions; but no group rises or falls on its own accord.

Stanford Ethics of Development in a Global Environment: Portrayal of Minorities in the Film, Media and Entertainment Industries

Cornell: African-American Music as Rebellion: From Slavesong to Hip-Hop

Wesleyan University: Racial Stereotypes From the Days of American Slavery: A Continuing Legacy

Darwin’s Athletes: How Sport Has Damaged Black America and Preserved the Myth of Race

History is a Weapon: Slavery and Prison – Understanding the Connections

History is a Weapon: Slavery and Prison – Understanding the Connections

The Atlantic: The Data Are Damning: How Race Influences School Funding

NCAA: Probability of Competing in Sports Beyond High School