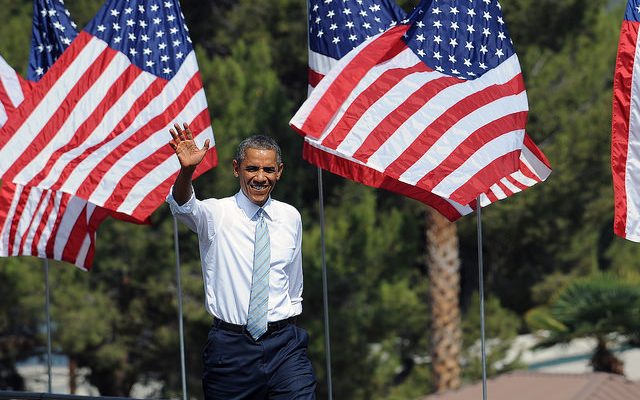 Image Courtesy of U.S. Department of Agriculture : License (CC BY 2.0)

A Look Back at the Obama Administration’s Environmental Legacy

While President Barack Obama’s time in office has now come to a close, his environmental legacy has the potential to last far beyond his eight years as president. The Obama Administration has worked tirelessly to protect and defend the environment, championing several initiatives. Some key accomplishments, however, include the establishment of more national monuments than any other president, signing the historic Paris Climate Agreement to reduce greenhouse gas emissions, banning drilling in parts of the Arctic and Atlantic Ocean, and unveiling the Clean Power Plan. Additionally, Obama raised fuel-efficiency standards, invested in green energy, and created the Federal Strategy to Promote the Health of Honey Bees and Other Pollinators. Whether these policies stand the test of time, however, may depend heavily on the actions of future administrations.

While Obama’s time in office was winding down, he was still designating sites as national monuments. On January 12, 2017, Obama named five new national monuments. That brought his total number during his presidency to 34—more than any other president. Moreover, in December 2016, he created two national monument sites in Utah and Nevada. The Bears Ears National Monument, which protects 1.35 million acres of land in southwest Utah and two geological formations, was particularly controversial; five Native nations had petitioned Obama to grant federal monument protections to the area.

Over the course of his time in office, Obama utilized the Antiquities Act–a law signed by President Theodore Roosevelt in 1906–multiple times to create the monuments. The Act gives the President of the United States the authority to set aside land to protect important historic, cultural, and ecological sites without approval from Congress. In total, Obama protected more than 550 million acres. That is more than double the amount that Roosevelt, a well-known conservationist, conserved himself.

A large portion of the land Obama protected is covered by water. He created and expanded several large national marine monuments. One notable monument is the Pacific Remote Islands National Marine Monument, a large collection of coral reefs, underwater preserves, and tiny islands roughly 1,000 miles off the coast of Hawaii. Bush had originally established the monument in 2009 at 55.6 million acres; Obama then expanded it by 261.3 million acres in 2014. Obama also quadrupled the size of Hawaii’s Papahānaumokuākea Marine National Monument, which is home to more than 7,000 species of wildlife, many of which are endangered.

Ban on Arctic and Atlantic Drilling

In addition to the significant acreage of water Obama protected as national monuments, his administration also banned arctic drilling. Using the Outer Continental Shelf Lands Act, Obama withdrew hundreds of millions of acres of federally-owned land in the Arctic and Atlantic Ocean from new offshore and gas drilling in December 2016. The Act allowed for Obama to act unilaterally, but no president has ever utilized the law to permanently protect land. In particular, large portions of the Chukchi Sea and Beaufort Sea in the Arctic and canyons in the Atlantic from Massachusetts to Virginia are now off-limits to oil exploration.

The Atlantic Ocean already had a five-year moratorium in place, and the protection of the canyons means that most of the eastern seaboard will not be drilled for oil. The seas in the Arctic are a habitat for several endangered species, including species that are candidates for an endangered species listing, and the canyons protected are largely recognized as biodiversity hotspots. If the ban is upheld by the courts, about 98 percent of the waters in the Arctic would be protected from oil exploration and drilling. In a presidential memorandum, Obama stated that these areas are extremely vulnerable to oil spills and have irreplaceable value for marine animals, wildlife, wildlife habitat, and scientific research–making the Arctic Waters a prime area for protection

The Paris Climate Agreement was the first of its kind–a global consensus to combat the effects of climate change. Its central aim is to strengthen the response to threats of climate change and keep the global temperature rise below 2 degrees Celsius. The agreement also aims to cut global greenhouse gas emissions by limiting the burning of fossil fuels and assist in preventing further floods, droughts, catastrophic storms, and rising sea levels.

In a rare moment of consensus, both the U.S. and China ratified the agreement, formally committing the world’s two biggest economies to curb climate change. The terms allow countries to determine independently which strategies will be most successful in attaining climate goals. While some of the aspects are binding and some are not, Obama’s ratification of the deal demonstrated a bold move by his administration to make protecting the planet a priority in years to come.

President Obama’s most historic environmental initiative, perhaps, is the Clean Power Plan, which is designed to aggressively shrink America’s carbon footprint. The plan outlined the first national standards to specifically address pollution from power plants. In particular, the plan cuts significant amounts of carbon pollution and other pollutants from power plants that are responsible for soot and smog that have an adverse effect on human health. The plan is long-term, allowing companies to remain in business while making the changes needed to comply with the new standards.

The Supreme Court issued a “stay” in February 2016,  temporarily halting the plan from moving forward. However, it is set to be fully in place by 2030, with carbon pollution 32 percent below 2005 levels, sulfur dioxide pollution 90 percent lower, and nitrogen oxides 72 percent lower. This reduction in greenhouse gases is specifically aimed at combating the dangerous effects of such pollution on the climate. Additionally, the entire plan itself is expected to contribute a variety of positive economic effects–climate benefits of roughly $20 billion, health benefits in the $14-$34 billion range, and total net benefits of approximately $26-$45 billion.

Despite the great measures Obama undertook to protect the environment, it is quite possible that some of his environmental policies will be overturned by a new administration. The ban on drilling may or may not be able to be overturned by President Trump, but a Republican-controlled Congress could move to rescind the withdrawal of federal lands from oil and gas exploration. However, such a move might not be successful, given a close reading of the Outer Continental Shelf Lands Act.

National monuments have never been removed by a subsequent president, but President Trump has reportedly stated that he is open to the idea of doing so. As for the Paris Climate Agreement, Trump has made it clear that he wants to withdraw America’s participation in the historic deal. Arguments that the agreement will be disastrous for the economy and American industry are at the forefront of opponents’ minds. While Trump considers withdrawing the U.S. from the agreement, China, India, Germany, the EU, and the UK have all reaffirmed their commitments to curb emissions. China’s President, Xi Jinping, even stated that removing the U.S. from the agreement will endanger future generations. Furthermore, if other countries continue to invest heavily in clean energy, then money, jobs, and technology are sure to stream into those industries, perhaps leaving the U.S. behind.

The fate of the Clean Power Plan also hangs in the balance under the new administration. Many opposed to the plan have already urged President Trump to sign an executive order that rescinds the rule and tell the Environmental Protection Agency (EPA) not to enforce it. However, attorneys general from a variety of states have noted that “history and legal precedent strongly suggest that such an action would not stand up in court.” The plan is also vulnerable to the Congressional Review Act, which would allow Congress to nullify the regulations. For now, the Clean Power Plan remains in limbo.

Overall, most of Obama’s environmental legacy will be decided by the courts, not by a particular administration. With more than 100 judicial vacancies across the country as Trump takes office, along with a vacant Supreme Court seat, the courtroom is going to be the arena in which environmental policies could be dismantled. In particular circuits with more than one vacant seat, specific areas of environmental regulation may be rolled back immensely; for example, the Second Circuit has become a critical arena for determining water regulation under the Clean Water Act and the Ninth Circuit has a profound impact on endangered specifies. Environmental groups are already preparing to take any anti-climate policies or actions to court, along with attorneys general from multiple states.

Obama’s presidency was clearly focused on environmental protection and combating catastrophic effects of climate change in the coming years. As commander-in-chief, Obama did an extensive amount of work to ensure the environment is viable and sustainable far into the future. Whether his efforts will be unraveled in the new Trump Administration and Republican-controlled legislative branch, however, is yet to be seen. Overall, Obama’s actions certainly elevated the environment and climate change to a much higher level of importance, and his environmental legacy may have him remembered as one of the top environmental presidents in history.

Nicole Zub
Nicole is a third-year law student at the University of Kentucky College of Law. She graduated in 2011 from Northeastern University with Bachelor’s in Environmental Science. When she isn’t imbibing copious amounts of caffeine, you can find her with her nose in a book or experimenting in the kitchen. Contact Nicole at Staff@LawStreetMedia.com.
Share:
Related Itemsarctic drillingClean Power PlanEnvironmentEnvironmental ProtectionNational MonumentsObamaObama AdministrationParis Climate AgreementTrump