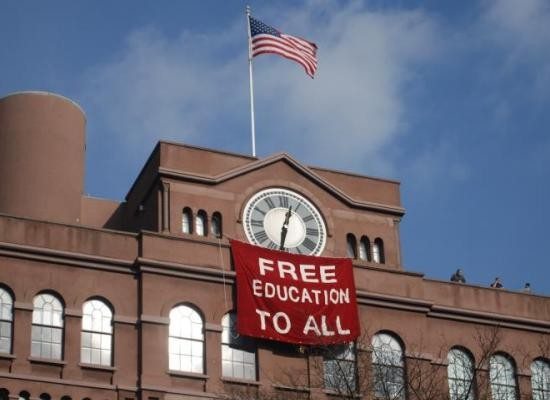 During the recent Democratic debate in Charleston, South Carolina, front-runner Hillary Clinton, Vermont Senator Bernie Sanders, and former Maryland Governor Martin O’Malley each became increasingly combative with one another when discussing their positions on important issues for voters. With the Iowa caucuses quickly approaching, these debates are becoming more crucial as voters begin to sift through many of the issues discussed including gun control, healthcare, Wall Street, immigration, and foreign policy. Although minimally discussed during the debate, tuition-free education may become a campaign defining issue. Many candidates have tuition and debt relief initiatives on their platforms, but what exactly is tuition-free higher education and who supports it? Keep reading to learn more.

Tax-funded education is not exactly a new phenomenon, but most recently tuition-free education programs at the state level have been launched in Tennessee and Oregon for community colleges. Many other states have similar programs on the table at the two-year level, but Sanders is the only candidate in this presidential cycle to propose a federal program for tuition-free higher education at the public university level.

Specifically, the self-proclaimed “Democratic Socialist” Bernie Sanders mentioned during the debate in Charleston that his education plan includes free education at both two-year and four-year public institutions. Midway through the debate, one of the moderators Andrea Mitchell asked Sanders how, among many other issues on his platform, would he pay for this education initiative. Sanders responded by stating that he wants to rebuild our infrastructure and close the loophole that allows major corporations to stash millions in the Cayman Islands and not pay a nickel in taxes.  Sanders continued through his want list saying,

I want every kid in this country who has the ability, to be able to go to a public college or university tuition-free and by the way, substantially lower student debt interest rates in this country as well.

Among other seemingly expensive programs, his tuition-free education plan would be paid for by Wall Street taxes, according to Sanders. “We bailed out Wall Street, now it is Wall Street’s time to help the middle class,” Sanders explained.

How do the Conservative Candidates Feel?

With the exception of a few Democratic candidates, higher education issues have not been at the forefront of topics to tackle on the campaign trail. Many of the GOP candidates have instead chosen to focus their education positions in the K-12 sector.

As a whole, many Republicans have begun to move away from the Common Core values that former Florida Governor Jeb Bush famously supported, which seek to establish consistent educational standards across the states. But the GOP candidates differ a lot with their plans, with Dr. Ben Carson going on record in support of reducing tuition costs and student debt, while Ted Cruz publicly denounced Common Core in favor of local control of education. However, Donald Trump, the current party front-runner, has yet to roll out an actual education plan.

The International Take on Free College

The Sanders campaign aims to make college education tuition-free nationwide in hopes to prepare more Americans for the workforce and alleviate student debt. But according to the Sanders campaign, the idea is not as radical as some would have you believe.

Germany has already eliminated fees for their able college students by making their citizens pay much higher percentages in taxes than people in the United States. Unfortunately in an effort to keep costs down, many of these German universities place students in larger classrooms and forgo non-essential campus amenities. Denmark and Sweden also have tuition-free higher education for its citizens, and Chile, Finland, and Norway, will soon follow.

Who’s on Board with Sanders’ Plan?

Although Clinton is currently leading by 25 points, her lead is slipping, according to the latest NBC/Wall Street Journal poll. As the first nomination contest in Iowa approaches, her stance on education may be the tipping point for securing likely voters. Like Sanders, Clinton believes that student debt is problematic and has also become a proponent for tuition-free education–at least for community college students. On Clinton’s campaign website she said, “we need to make a quality education affordable and available to everyone willing to work for it, without saddling them with decades of debt.”

Clinton agrees with Sanders with regard to reducing debt so students shouldn’t have to take out loans to pay for a quality education, as stipulated through her New College Compact education plan, but differs, however, in making tuition free at the university level.

In addition to Clinton’s education plan aiming to improve the amount of students able to attend college debt-free, the New College Compact program insists that students should be able to access higher education at the two-year level tuition-free, indicating that states need to reinvest in schools to improve student outcomes and graduation rates. Part of the Clinton campaign strategy is to build upon the presidency of Barack Obama and access to higher education is an indicator of such alignment. The New College Compact plan that includes a free community college provision mirrors the America’s College Promise program launched by the Obama Administration at this time last year.

The third Democratic presidential candidate, Martin O’Malley, found it difficult to get a word in on any of the issues he deemed important in Charleston, SC, which was the last debate before Iowa. Polling at an estimated 2 percent, securing the nomination for O’Malley is going to be an uphill battle. If viewers heard more from O’Malley, we may have been privy to his position on tuition-free education.

In contrast to Sanders and Clinton, O’Malley does not support a tuition-free higher education plan of any sort. Instead he proposes that college be debt-free for students, which coincides with the other democratic candidates’ platforms.

In agreement with the student-debt positions of Sanders and Clinton, O’Malley’s debt-free education proposal requests immediate relief to student borrowers, freezing public tuition rates, reduce tuition costs, increasing college preparedness, and holding for-profit colleges accountable. The O’Malley plan also aims to address other fees not associated with tuition that contribute to student debt by increasing Pell Grants, expanding work study programs, and providing childcare on campus, which have not largely been discussed by the other Democratic candidates.

What does this all mean?

Education has been a dividing issue for candidates for decades and the current presidential cycle will be no different. With many of the conservative candidates using sound bite opportunities to discuss their disdain for Common Core, while the liberals center their education conversations on the student debt crisis, the discussion will have an impact on the decisions for voters on both sides of the political aisle.

For those willing to discuss tuition-free education, the most eye-opening plan comes from candidate Sanders. His campaign hopes to make public colleges and universities tuition-free. Although Clinton supports tuition-free programs, her plan would only apply to two-year colleges, and would emphasize relieving students of crippling debt. O’Malley wants to help American families that are being crushed by $1.3 trillion in outstanding student loan debt, but his plan does not include a tuition-free education. He does, however, consider other fees associated with the total cost of college, that go beyond just tuition.

These education plans will be heavily scrutinized, along with initiatives yet to emerge from other candidates since the economic success of the country is contingent on the preparedness of its workforce. The federal government has also benefited from student loan interest rates and with the cost of college in the United States exponentially rising, more students are receiving financial aid assistance through loans more than ever before.

A college education has been categorized as an indicator of lifetime income earning potential. Whether paying for college outright, or through loans, the future of the country rests on the ability to contribute to the economic. The idea that tuition-free higher education will eliminate student debt is not going away and remains to be seen how Americans will respond this November.

Los Angeles Times: Why You Can Get a Free Education in Germany But Not in California

Jamal Evan Mazyck
Jamal Mazyck is currently pursuing an Ed.D. in educational leadership and is a graduate research assistant at San Diego State University. When he is not writing, researching or tweeting about the ins and outs of higher education, he can be found on the tennis court and running half-marathons. Contact Jamal at Staff@LawStreetMedia.com.
Share:
Related Items2016 Presidential ElectionBernie SandersCollege DebtEducationStudent LoansTuition-Free Education