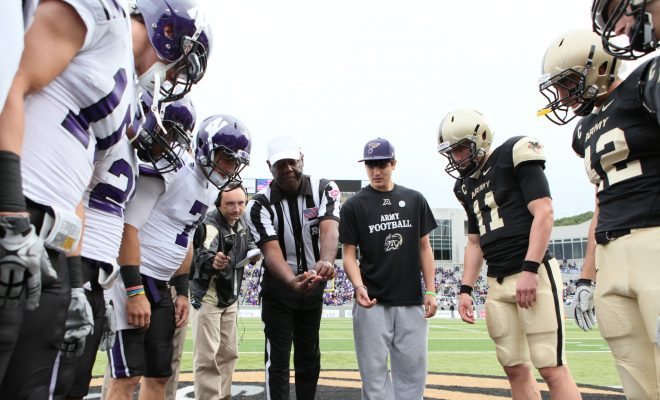 "Coin Toss" courtesy of [The U.S. Army via Flickr]

The Battle in College Sports: Northwestern Football and Unions

On March 26, 2014, Peter Sung Ohr, a regional director for the National Labor Relations Board (NLRB), issued a landmark ruling that football players at Northwestern University are allowed to form a union. The college sports world erupted. Naturally, Northwestern immediately challenged the ruling. In the meantime, the case leaves players and universities with more questions than answers. Some athletes want unions, universities and the National Collegiate Athletic Association (NCAA) are fighting back, and fans are wondering if this will impact their BCS Bowl viewing parties. What exactly does this all mean, and are we slowly inching toward paying college athletes?

What is the case for unions?

Ohr’s ruling cites several important factors as reasons football players at Northwestern should be treated as university employees and therefore, allowed to unionize:

Listen to a more in-depth explanation of the ruling below:

What do the players actually want?

The College Athletes Players Union (CAPA) is the formal entity created to represent Northwestern’s players in a union. CAPA was formed by former college athletes, including former Northwestern quarterback Kain Colter, as an offshoot of the National College Players Association (NCPA), an advocacy group. Rather than fighting for pay, the union is about giving college athletes a seat at the negotiating table. The NCPA outlines 11 goals which are shared by CAPA and Northwestern’s players in their “Blueprint for Change”:

What is not included (yet) — any desire for a pay-for-play program.

On April 25, 2014, football players at Northwestern made history by becoming the first collegiate athletes to vote on forming a union. However, the votes are impounded until Northwestern’s appeal to the NLRB is decided, which could take months or even years. The votes cast by Northwestern’s players will only be opened if the board sides with the players. Smart money says the 5-member, labor-friendly board will uphold Ohr’s decision that football players are employees. If the board upholds the decision, the mere right to vote on a union is a victory for Northwestern’s football players. It is likely by the time the case is ultimately decided, the players who voted will no longer be at Northwestern. But if the players voted against forming a union, they would still be considered employees even if the union movement at Northwestern would temporarily end. If the players voted for a union, the University would be forced to bargain with CAPA or force further appeals.

More importantly are the implications for the University at the NCAA. At this point, the union is not asking for a pay-for-play, but unions could be the first step down that road. Furthermore, if football players are treated as employees, they could be subject to tax on their scholarships.

What would a union mean for universities?

Most importantly, a union would mean Northwestern would have to negotiate with players and meet more of their demands. Northwestern strongly urged its students to vote against forming a union. Northwestern’s Vice President for University Relations Alan Cubbage issued a statement saying, “Northwestern believes strongly that our student-athletes are not employees, but students. Unionization and collective bargaining are not the appropriate methods to address the concerns raised by student-athletes.” Team officials see a union as transferring the players’ trust to a third party which may not have the players’ best interests in mind. They argue a union would create an “us versus them” mentality and create unnecessary tension for the team.

The NLRB ruling applies solely to private schools, only a handful of which (Stanford, USC, Notre Dame, Vanderbilt, Duke, Miami) have big-name athletic programs. The law currently exempts public schools from NLRB jurisdiction, but public universities should be concerned if state labor boards decide to follow the lead of NLRB. The push from Northwestern’s players alone may make colleges consider greater dialogue with players in regard to health, safety, and full-cost scholarships. Simply by filing, the players have made athletic departments across the country more concerned that their players be treated fairly.

Why is the NCAA opposed?

The NCAA has long insisted that players are “student-athletes” who are foremost students, which is strongly at odds with the notion that student-athletes are employees. NCAA officials are quick to point out that 99 percent of college athletes will never play professional sports.The NCAA has created a system which has helped millions go to college, and they do not want to see this system thrown away. A primary concern is that allowing unions is a first step toward greater benefits for athletes, including pay. In 2012, the NCAA reported $872 million in revenue. Many players see their lack of receiving any of this compensation as exploitation. Below is a clip from NCAA’s President Mark Emmert discussing the impact of unionization:

Unions may be a big first step toward long-term change, but allowing unions themselves will not revolutionize the college sports’ world. Athletes will still take the field every Saturday and the NCAA will still make billions. A union will allow players to negotiate benefits on their own behalf. The ruling would make football players employees of the university, not of the NCAA, so there would not be any direct impact on any NCAA rules.

Currently, the NCAA is fighting a slew of lawsuits which pose greater threats to its future. Jeffrey Kessler and Ed O’Bannon have each brought a significant lawsuit:

Treating college athletes as employees means a fundamental shift in the negotiation rights provided to athletes. Whether or not the original NLRB ruling is upheld, universities and the NCAA will be forced to alter their own stance to ensure athletes do not feel that they are being exploited. Problems with college athletics will not disappear anytime soon, and major change is coming to the economic model of college sports.

Washington Law Review Association: The Myth of the Student-Athlete: The College Athlete as Employee

SB Nation: Northwestern Players’ Union Votes are in: Now What?

Washington Post: College Athletics Have Many Problems, But a Union is the Wrong Way to Try to Fix Them