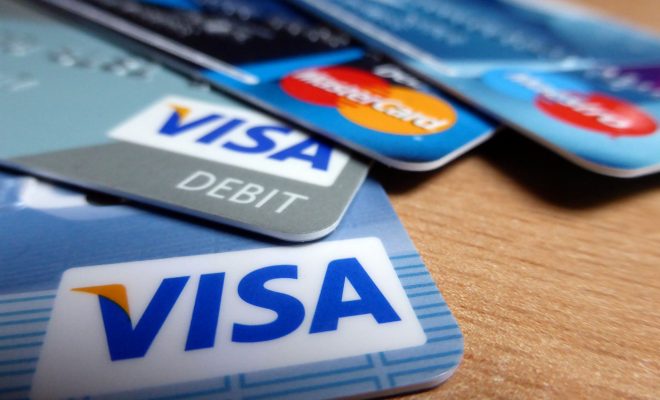 By now, most people have become familiar with the additional hoop they have to jump through when buying things at the store. When you get to the checkout counter you do an awkward dance: do I swipe my credit card, do I put it into the chip reader, do I need my PIN, can I pay with my phone? The United States is currently in the middle of an update to its credit card infrastructure, an update that has been difficult for many consumers to navigate. What’s behind the recent changes and why have they just started now?

The technology behind the original magnetic strip card was developed as early as the 1960s, but credit cards didn’t become a mass technology until the 1980s. Before then, their use was largely limited to business people and frequent travelers. The main issue originally holding plastic back was the cost. Namely, in the United States transaction costs were relatively low, a few cents each, because they were conducted over phone lines. In Europe, however, transactions were not done this way, leading to much higher costs. And using phone lines was actually a step up from the initial way credit cards were authorized, through carbon papers. When that was the case, people could commit credit card fraud by simply digging through dumpsters.

The video below gives a detailed account of the history of credit cards:

Because the European credit card system was so susceptible to fraud, European companies needed a more secure way to process transactions. Stakeholders got together and began to develop an alternative. This alternative, chip card technology or the formal name, EMV, was unveiled in 1994 and became widespread by 1998 in Europe (EMV stands for Europay MasterCard Visa). Despite widespread usage of EMV technology in Europe and other parts of the world, it has been slow to gain traction in the United States. It was only in 2015 that American companies and merchants began a concerted effort toward adopting EMV.

Adoption in the United States

So why did the United States ultimately decide to switch to EMV cards in 2015 when the technology had been readily available since the 1990s? The primary answer is the recent surge in credit card fraud, starting with the massive hack at Target in 2013 in which millions of credit cards were stolen. This hack, along with several other high-profile incidents, revealed the truth. Namely, companies were trying to secure customers’ data in the 21st century with cards from the 20th. The accompanying video looks at why the United States switched to EMV and what it means for cardholders:

However, the recent change was not the result of a top-down mandate from the government. In fact, the effort was led by a private group of credit companies including American Express, Discover, MasterCard, and Visa. The 2015 deadline was not a concrete point of no return, but one created by the same credit card companies. While companies did not have to meet the deadline by law, the liability for card-present fraud would shift to those who do not comply with the new technology. In other words, if a company or a bank did not adopt the EMV technology by that date and was the victim of fraud then it was on the hook for the cost.

While retailers had until 2015 to comply, automated gas dispensers have until 2017. Likewise, ATMs also have a little extra time–Mastercard and Visa ATMs must make the shift by October 2016 and 2017 respectively.

Aside from following in Europe’s lead and satisfying the requirements of credit card companies, the EMV cards offer a number of advantages over traditional cards. First and foremost is security. Whereas traditional cards have one magnetic strip that can be easily copied onto a fake card, EMV cards do not. Instead, the EMV cards utilize the chip embedded in the cards, which creates a different transaction code for each purchase. As a result, if someone manages to get that transaction data, the code is unique to a specific transaction and cannot be used again for future purchases.

EMV cards work in two ways. They can be dipped into a machine, where they have to be held for a few seconds longer than it takes to swipe a traditional card. The card can also be held up to a contactless device, however, these devices are more expensive and less likely to be available as the technology is only now entering the American market.

Another distinction for these type of cards is the actual transaction process. Most of the models in the United States will be the traditional swipe or dip and then sign. Currently, most new credit cards have both a chip and a magnetic strip in case a store’s technology has not yet been updated, but in the future, cards will likely only have chips in them. There is an even more advanced version that requires consumers to enter their PIN numbers after dipping the card, but it costs more and is less likely to be seen in the United States anytime soon. In fact, this type has almost been discouraged as the major credit card companies that initiated the switch to EMV cards did not require them to be “Chip and PIN” models.

The video below from Mountain America Credit Union looks at the chip card and some of its advantages:

Even with the deadlines, adoption of the EMV cards has been a slow process. By 2015, 25 percent of new cards issued were EMV. By the end of 2016, a year after the deadline, that number is projected to be only 75 percent. While part of this is due simply to technological limitations and the difficulty small banks can have when switching up their technology, there is more to the story that just that.

Namely, the switch will be very expensive. Updating the millions of traditional card readers will cost approximately $7 billion. On top of that is the cost to replace the cards already out there, which is estimated to be another $1.4 billion. Last, there is the cost  to replace ATMs and old software so that they can read the new cards, a change that may cost up to $500 million.

Although the chip cards’ chief advantage over traditional cards is safety, they are far from hacker-proof. Now instead of targeting the cards themselves hackers can target the machines that read them. Specifically, criminals can drill or even insert devices into card readers that are able to read the information protected on the cards. Using this information, thieves have been able to make counterfeit cards with magnetic strips and use them in places that do not have the new technology.

On top of security is also the issue of privacy, as the new cards also transmit a large quantity of data. Information, like a person’s present location, may become available if the card is hacked. Lastly, the cards are slower to process and many of the merchants required to make the shift either do not understand the technology or its benefits.

Finally, while it is not the fault of the cards themselves, experts suggest that stiffer security from the new cards will lead to greater rates of card-not-present fraud like online transactions. While these cards may improve security for in-person transactions, fraud may simply move elsewhere.

EMV cards have long been popular in Europe and other markets, yet Americans have been resistant. But that resistance crumbled when a series of hacks revealed how easily credit card information could be obtained. The new chip cards do offer advantages, most notably in terms of security. However, they also have a number of disadvantages and will not get rid of fraud altogether.

Not surprising then, even following deadlines for adoption required by credit cards companies, many American merchants have been slow to endorse them. Additionally, American consumers have also been slow to embrace the new technology due to its slower transaction times. Nevertheless, EMV technology is likely here to stay and will soon become the dominant form of credit purchasing. There will undoubtedly be a number of hiccups in the short term as the technology’s flaws are exposed. But ultimately, those same flaws are likely to be addressed and, in the end, just might make the average American’s wallet a safer place.

Iovation: The History of Credit Cards and How EMV Will Change Things

USA Today: Where is the EMV Card 10 Months Later?

Nerd Wallet: What Are the Downsides to EMV Technology?

Payments Source: EMV Tech in the U.S. Is Still Too Slow and Expensive

Gizmodo: How Criminals Can Easily Hack Your Chip & Pin Card

Michael Sliwinski
Michael Sliwinski (@MoneyMike4289) is a 2011 graduate of Ohio University in Athens with a Bachelor’s in History, as well as a 2014 graduate of the University of Georgia with a Master’s in International Policy. In his free time he enjoys writing, reading, and outdoor activites, particularly basketball. Contact Michael at staff@LawStreetMedia.com.
Share:
Related ItemsBankingChip CardsCreditCredit CardsCredit FraudEuropay