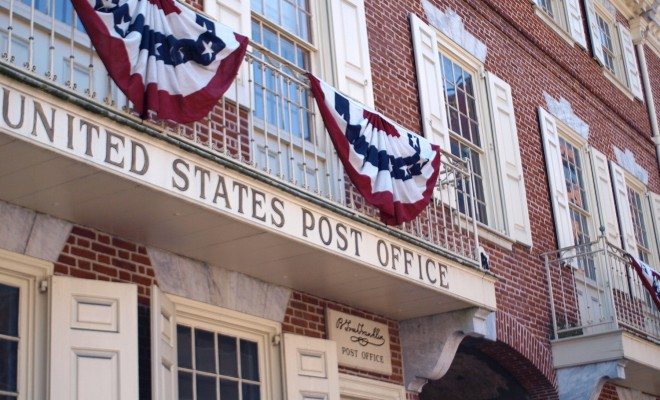 Should We Bring Back The Postal Banking System?

If you are tempted to take out a payday loan you might want to take Sarah Silverman’s advice and try literally anything else. The trouble is, there are rarely other options and here in the United States there are 40 million Americans who are “unbanked,” without access to the formal financial system. Shockingly, these Americans spend the same amount just to use their own money as they do to purchasing food–10 percent of their income.

Payday loans may be an evil but unless and until they are replaced with a better alternative they continue to be a necessary one. Eliminating payday lenders would prevent borrowers from taking on that particular pernicious type of debt but does not solve the underlying concern that many unbanked Americans do not have access to credit.

One of the proposed solutions to provide access to banking services for the unbanked is to use the United States Postal Service. Progressive politicians are advocating this method as an efficient way to reach low-income citizens in their neighborhoods. But some are uncomfortable with a government agency, one which is facing some financial difficulties of its own, taking on a problem that should be dealt with by market forces.

So is the existence of the “unbanked” really a problem? If so should we be using the post office to combat it?

A Solution for the Unbanked?

For a primer on the issue of how many Americans are currently unbanked and would benefit from an alternative to payday loans, check out this TedTalk by Mehrsa Baradaran.

As Baradaran explains, postal banks are actually something we already had and used to great success. From 1910 to 1966, the U.S. Postal Savings system provided a place for Americans to deposit funds in order to save money and have a way of paying their bills other than with cash. That is one of the chief problems facing the unbanked–the inability to have easy access to their own money and the high percentage of their money spent on just using their own funds. Paying a fee to access your own money or even just check your account balance is a significant financial burden and a service that the banked get access to for free.

With the advent of community banks, which offered a more attractive interest rate to depositors, the postal banking system seemed unnecessary and was eventually abolished in 1966. But the community banks–which were also proposed as a solution to the problem of the unbanked–removed themselves from low-income neighborhoods and contracted the number of people they provided services for. Nature abhors a vacuum and payday lenders went into that space, which is why people in low-income neighborhoods are often forced to rely on these types of lenders as substitutions for the banking services that the banked take for granted.

For the unbanked, there is simply not a banking location that they can go to. And one of the beauties of using the postal system for banking is that convenient locations already exist. Fifty-nine percent of post offices are in zip codes where there is either zero or only one bank. Other industrialized nations already have postal banking. In the U.K., the postal service does not actually provide financial services but allows third-party providers (like the Bank of Ireland) to conduct business there. France has actually converted its postal service into a financial institution.

The concerns regarding postal banking fall into two main camps. First, there is the question of whether a postal banking system would help and whether the U.S. Postal Service could operate it efficiently and fairly. The second concern is less a practical question of ability and more an assessment of whether we want to use the postal service to promote a specific financial ideology.

The U.S. Postal Service seems to think it would be able to provide this service. The American Postal Workers’ Union makes the argument that postal workers are already in the very places that community banks have abandoned and they currently provide some financial services, like money orders. They would be able to provide small loans as well–like a payday lender but without extremely high interest rates.

The video below outlines the case made by the American Postal Workers’ Union for postal banks.

But the argument goes beyond the mere logistics of whether post offices can provide these services. The core concern is whether they should. Whether we want a government institution to be providing a service that is traditionally left to the private sector. After all, should the government really be involved in trying to undercut the payday lending industry based on a largely moral argument about “fairness”?

The private sector might argue that payday lending is actually fair. It provides a needed service–credit–at a rate that people are willing to pay. With so many of these financial institutions out there it is hard to argue that the industry is not competitive and given that these rates are still being accepted by many borrowers that must be what the credit is worth.

But that argument may misconstrue what true competition, one that will actually produce a fair price for something in a healthy market, consists of. Critics of payday lending would argue that true competition involves choices between meaningfully different options, not the illusion of choice between virtually identical competitors. A person living in an area where there are 10 payday lenders and no banks is not truly living in a competitive market. The individual lenders may vary their terms slightly but from the perspective of the borrower, they are still going to have to choose a payday lender. QuickCash versus KwikKash does not, at the end of the day, matter very much to the borrower or to the pernicious effects of the system.

The implementation of postal banking would provide meaningful choices to borrowers and create a true alternative to the payday lending industry. Then, when faced with that actual competition, they will be forced to either adapt or die. If a 400 percent interest rate really is a reasonable price to pay for the service they are offering then payday lending will survive the introduction of postal banking.

When you discuss postal banking there are two main ways that it can be structured–a postal bank that provides access to credit and one that does not. In the past, postal banks did not provide the type of micro-loans that would compete with payday loans. While a modern version of the postal bank could include small loans it doesn’t necessarily need to. Postal banks can provide other valuable services; most importantly post offices can serve as a place to save and access your money. If postal banking was re-instituted without lending, it would likely go a long way in solving the problem of access for the unbanked and underbanked.

Currently, people who live in a community where there is no bank have three main options to cash their paycheck. Payday loan providers that usually charge a 10 percent fee, check cashing services (some are part of larger retailers like Walmart) that typically charge a lower flat fee, and prepaid card accounts that allow you to deposit your money into the account but then charge a monthly fee for you to use the card. Those of us with bank accounts can get all of these services for free.

Postal banking would, of course, involve the government taking on a role that is now filled by the private sector. One fear is that this will stop the development of private sector alternatives to payday lending and stifle innovation in the provision of financial services. We may hate payday lending, but many feel that if it is going to be replaced that should be done by the private sector–through innovation in technology or some other form of financial institution. The government’s role should be contained to regulating industries, not replacing them.

But the postal bank did not, when it existed, kill other banks. In fact, the opposite happened. The rate of interest for the postal banks was capped at 2.5 percent to weaken their ability to compete with other banks. When community banks offered better rates, not surprisingly, depositors moved there–choosing a private sector institution that they felt better suited their needs. Postal banking also would not eliminate advances in technology and electronic banking. Those advances are driven by thinking of better ways to provide services to already banked people.  Applications that transfer money instantly between bank accounts for a minimal fee on your smartphone only benefit people who have smartphones and bank accounts. To the unbanked, these advances are meaningless–21st-century innovations in banking don’t assist people who are still stuck in the 20th. Creating a postal banking system would help the millions of unbanked Americans enter into the formal financial system, but it may not have much effect on companies seeking to further cater to those who are already included.

Postal banking may seem to some like a governmental overreach into an arena where the forces of the market should be in charge. Undercutting a private sector industry in favor of a government run charity-bank makes some people uncomfortable. Some may ask where we should draw the line between public good and social engineering. But postal banking already worked once in our nation’s history. And while it is not a complete solution to the problem of the unbanked and underbanked it could be used as part of that solution.

NerdWallet: Where To Cash A Check Without Paying Fees

Goodreads, How The Other Half Banks

The American Interest, The Return of Postal Banking

Mary Kate Leahy
Mary Kate Leahy (@marykate_leahy) has a J.D. from William and Mary and a Bachelor’s in Political Science from Manhattanville College. She is also a proud graduate of Woodlands Academy of the Sacred Heart. She enjoys spending her time with her kuvasz, Finn, and tackling a never-ending list of projects. Contact Mary Kate at staff@LawStreetMedia.com
Share:
Related ItemsBankingChecksCredit LineDebtPayday LendersPostal BankingUnbankedUnderbanked