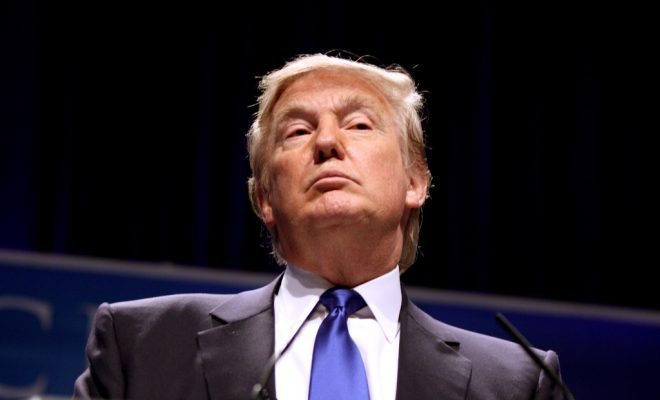 Historically speaking, when a nation suffers a tragedy–a mass shooting, a terrible earthquake, a humanitarian disaster–world leaders offer condolences. They attempt, at the very least, to assuage fears, to pray, to be the sympathetic speak piece for their citizenry. In a time of calamity, presidents and prime ministers show solidarity with one another and with their respective peoples. Ironically, tragedies connect people, as people grieve for other people, no matter the flag they wave. Everyone recognizes loss.

Not so for Donald Trump. When disaster strikes a nation not named America, Trump preens his feathers–primarily on Twitter–asking rhetorical questions and subtly hinting that such things simply would not happen on his watch.

On Thursday morning an EgyptAir flight from Paris to Cairo went missing. Sixty-six people were on board the flight, which has been confirmed to have crashed in the Mediterranean Sea off the Greek island of Crete. And while signs are pointing to a terrorist attack, nothing concrete has been announced.

Trump–a man who waves off facts like they’re a bad business deal–saw this as an opportunity to present himself as the iron fisted leader that would apparently strike down insidious plots that even the world’s leading intelligence officials struggle with. Hours after the plane was announced missing, Trump took to his go-to megaphone, Twitter:

Looks like yet another terrorist attack. Airplane departed from Paris. When will we get tough, smart and vigilant? Great hate and sickness!

No mention of prayer. No mention of shared suffering. No nod to the losses dealt to 66 families. No sign of humanity. No cautioned stance due to a lack of facts. Just a self-serving, speculative burst of nonsense. The only fact to be found: “Airplane departed from Paris.”

Some may argue that a 140-character shot of sympathy and solidarity is hardly the most genuine sign of love and oneness in the world. And they are correct, in a sense. But when Trump wakes up in his Mar-a-Lago mansion, scans Twitter and sees a plane that left Paris for Cairo is missing, his reaction is to deem it a terrorist attack and posture himself as the theoretical savior. It’s telling that it doesn’t even cross his mind to shoot out a tweet recognizing the victims or their families or their home countries. He just narrows his gaze, tightens his mouth, and puffs his chest.

This is not the first time Trump has responded to a tragedy in such a way.

Following the mass shooting in Paris in January 2015–when 17 people were murdered, including members of the satirical newspaper Charlie Hebdo–Trump thrust the spotlight on gun control, using the episode as proof gun control doesn’t equal less violence:

Isn’t it interesting that the tragedy in Paris took place in one of the toughest gun control countries in the world?

After 32 people were killed in Brussels in March, bombed in an airport terminal and a subway, Trump let this tweet go:

Do you all remember how beautiful and safe a place Brussels was. Not anymore, it is from a different world! U.S. must be vigilant and smart!

While he did follow that up with an empathetic message to the victims (though not without his own stamp: “This madness must be stopped, and I will stop it.”), he again posited his own agenda ahead of any mention of non-American lives lost.

This is the man who could lead the most powerful country in the world. If elected president in November, he is the symbol of America’s well of empathy, of its heart. Does America’s heart bleed when another nation’s does? Does America shed a tear when another nation suffers? Trump is promising to make this country great again, but it can’t be great unless its supposed leader grieves with everyone else.

Alec Siegel
Alec Siegel is a staff writer at Law Street Media. When he’s not working at Law Street he’s either cooking a mediocre tofu dish or enjoying a run in the woods. His passions include: gooey chocolate chips, black coffee, mountains, the Animal Kingdom in general, and John Lennon. Baklava is his achilles heel. Contact Alec at ASiegel@LawStreetMedia.com.
Share:
Related ItemsDonald TrumpEgyptEgypt AirFranceTerrorismTerrorist AttacksTrumpTwitter