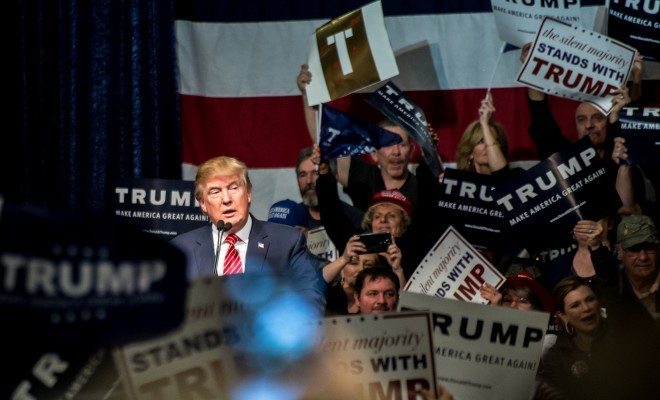 Trump is the Apparent Republican Nominee, and the GOP Establishment Is Confused

Last night, the big moment that people anticipated (and feared) finally happened: Donald Trump became the apparent GOP nominee for President of the United States. While this development brings no surprise to anyone who had been following the polls for the last few weeks, it still was a huge blow to the GOP establishment, who have seemed absolutely lost and completely divided on how to approach the hijacking of their party by a narcissistic megalomaniac.

While talks of a contested convention and a potential Paul Ryan bid provided a glimmer of hope to the establishment wing of the party, any hopes seemed dashed after Trump’s win in Indiana last night. The elimination of Ted Cruz from the GOP race made it clear that the Trump train could not be stopped–and many in the party had to make a decision about whether or not to get on for the ride.

The reactions to Trump’s impending nomination from party members were varied: while some in the GOP demonstrated that they would back the party’s nominee, no matter who it was, others declared that they would choose Hillary over Trump. Then there were those who just seemed confused about what to do now…as well as those who won’t be voting for either candidate.

The “anyone is better than Hillary” camp (aka #NeverClinton)

GOP chairman Reince Priebus never seemed super-enthusiastic about the potential for a Trump nomination, but he declared last night in a Tweet that the party needed to unite in order to prevent a Clinton win:

.@realDonaldTrump will be presumptive @GOP nominee, we all need to unite and focus on defeating @HillaryClinton#NeverClinton

Some former presidential candidates, many who were once rivals of Trump, changed their tone as well, including Bobby Jindal, who told Sean Hannity on Tuesday that Republicans who didn’t support the candidate would only be helping Hillary.

There’s a lot about Donald Trump that I don’t like, but I’ll vote for Trump over Hillary any day.

While there were few enthusiastic responses from the establishment GOP after Trump locked the nomination, it looks like many members will still be casting their vote for him come November, as long as it keeps Clinton out of the White House.

The #NeverTrump movement did not die with the elimination of Cruz from the race. Many prominent party members expressed the sentiment that, when it came to Clinton vs. Trump, Hillary would be the lesser of the two evils. Others did not clarify whether they would be voting for Clinton or abstaining completely after last night’s results, but indicated that their #NeverTrump stance wasn’t changing now that there were no other options in the party.

As a conservative, i would always rather lose to a democrat, than support a racist and sexist with my party’s nametag. #NeverTrump

Ben Howe, contributing editor at RedState.com, tweeted his endorsement for Hillary yesterday and demonstrated his solidarity with the #NeverTrump movement.

Another tweet that picked up steam showed the burning of a voter registration card by Lachlan Markey, a writer for The Free Beacon, who also expressed that he was “Never Trump. Still.”

Basically, this camp of the GOP establishment refuses to endorse Hillary, but also hasn’t yet expressed any sort of desire to vote for Trump. Time will tell how (or if) these party members vote.

The GOP must spend the next few months grappling with the fact that Trump will be the representative for the party in the general election. Meanwhile, Trump must figure out how to woo the establishment wing of the GOP away from a Hillary vote while maintaining the “anti-establishment” message that has brought him so much support. One thing’s for certain: these next few months will certainly defy traditional two-party politics and make for an unpredictable presidential race.

Mariam Jaffery
Mariam was an Executive Assistant at Law Street Media and a native of Northern Virginia. She has a B.A. in International Affairs with a minor in Business Administration from George Washington University. Contact Mariam at mjaffery@lawstreetmedia.com.
Share:
Related Items#NeverClinton#NeverTrumpDonald TrumpElectionGOPHillary ClintonRepublican PartyTed CruzTrump