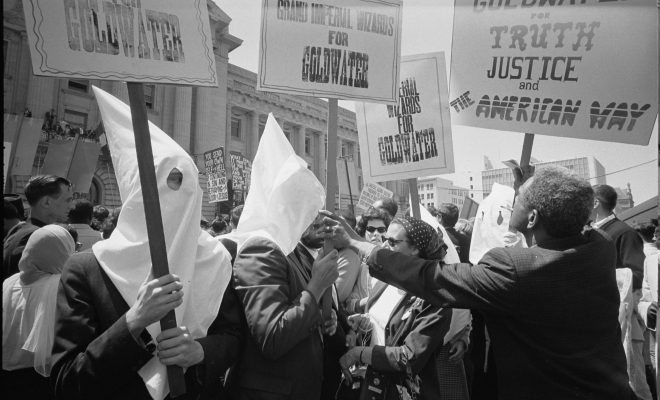 Is Trump This Generation’s Goldwater?

When Barry Goldwater ran for president in 1964, he affected the future of the Republican party immensely, even though he ultimately lost the race. Although many argue that Goldwater’s loss began the revitalization of the conservative movement, it also marked the start of black Americans’ growing negative perception of the GOP. It’s a pattern that Donald Trump is poised to repeat with Latino voters this year, potentially establishing a negative trend.

Goldwater’s staunch opposition to the Civil Rights Act of 1957–the bill striking down Jim Crow voting laws designed to deny voting rights to Black Americans–contributed to his high unfavorability ratings among black voters. According to Goldwater, his vote was purely a matter of resisting federal encroachment on states’ rights–but the specter of racism followed his campaign, leading to abysmal support from black voters.

Members of the Ku Klux Klan publicly endorsed Goldwater, and although he denounced their support, his opponent Lyndon B. Johnson made political hay out of the connection, which Goldwater wasn’t successfully able to escape. The whole situation sounds eerily similar to another GOP nominee not being able to detach himself from KKK support.

Goldwater’s race politics are the subject of discussion even today–in many ways, he was remarkably socially liberal for his party. By 1989, he stated that the Republican party had been overtaken by ‘kooks,’ and in the 1990s, Goldwater approved of several progressive measures, such as gays serving in the military and marijuana legalization. Martin Luther King Jr. put it very well: “While not himself a racist, Mr. Goldwater articulates a philosophy which gives aid and comfort to the racists.”

Although Goldwater isn’t the sole cause of this divide, he certainly coincided with its beginning. Nonwhite voters in 1960 only carried a 22 point deficit in Republican votes–the same divide present with female voters, although in the opposite direction. During this period, white and nonwhite voters disagreed, but not overwhelmingly so. That all changed in the next election–and the divide that followed is still present today.

In the election of 1964, nonwhite voters opposed Goldwater 94 to 6, marking the steepest voting difference among a minority group in U.S. history–until Barack Obama received 95 percent of the black vote in 2008. This is an example of a stark difference between Latino and black voters–ever since the 1964 election, black voters have supported Democratic candidates by an average of 78 points, while Latino voters’ support was only 45 points on average, with splits as close as 9 points in some years.

Check out the graphs below to see the voting patterns by group. The graphs use data on racial and ethnic voting groups from Gallup and the Roper Center, to show actual voting percentages by each group. Click here to read more about the data.

Latino voters preferred Democratic candidates in every election but often by slim margins.

This year, Donald Trump’s attitudes, positions, and comments regarding Latino Americans and immigration may be a ‘Goldwater moment’ for the minority voter bases. In almost every measurable way, Trump rates worse among minority voters than Goldwater. Whereas Goldwater served as a blockade for civil rights, he didn’t openly express racist or xenophobic opinions. Trump has no policy precedent to refer to but has ample opinions–many of which are categorically racist.

A candidate as blatantly offensive as Donald Trump sours the party’s relationship with Latino voters, directly contradicting the GOP’s efforts to connect with those voters. While we’ll have to wait until November for voting results, current favorability ratings paint a difficult picture for Trump. A June Washington Post/ABC survey found that 89 percent of Latinos saw Trump unfavorably. That number was 94 percent for black voters, which is staggeringly high, but the same divide was present between Barack Obama and both of his Republican challengers. These numbers don’t exactly correlate to votes, but they help create an estimate.

Here’s one last graph to show exactly what Trump’s effect could be on Latino voters. Note that this graph is speculative and the added election year assumes that Latino Americans will vote according to their current favorability perceptions of Trump as a candidate. The graph below illustrates how a new divide could emerge:

Trump’s record-high unfavorable rating among Latino voters could signal the largest party split since the 1970s.

Donald Trump’s numbers among Latinos are the worst his party has had in over 45 years–and that’s only half of the bad news for the GOP. Not currying favor with Latinos may not have cost Reagan or the Bushes the presidency, but it may very well cost Trump–Latinos are the largest ethnic or racial minority in the United States, making up 17 percent of the general population. Coupled with black Americans at 12 percent, these minorities are no longer so ‘minor,’ and can’t be ignored by candidates hoping to win a popular vote. While Trump might still be able to improve his standing with Latino voters, it will be an uphill battle. Trump may not be as well spoken, intellectual, or experienced as Barry Goldwater, but he may prove to be just as divisive.