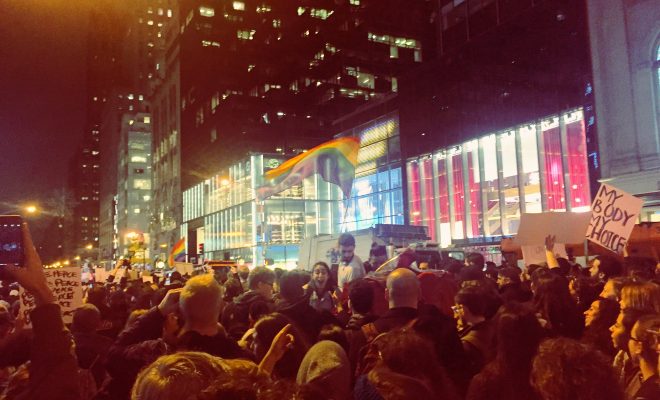 ‘Not My President’: Thousands Unite To Protest Trump Presidency

All of the sudden, the streets in New York City were filled with chanting people while men and women in skyscrapers peeked down from their windows and tourists on buses snapped pictures. Wednesday night saw thousands of people in cities with largely Democratic populations take to the streets to protest the election of Donald Trump.

Masses of people protesting in Union Square in New York tonight.
Together, we are stronger. 💪#LoveTrumpsHate #NotMyPresident pic.twitter.com/ubbGpBCAda

In Manhattan, estimates suggest that as many as 5,000 people worked their way uptown along Fifth Avenue and Broadway. At one point, the procession encountered a chain of police officers blocking Broadway going north, with speakers blaring out the message that the protesters were illegally blocking streets and would be arrested unless they moved onto the sidewalks. But no one listened–they just turned right and took the next street to move forward until they reached the Trump Tower.

Throughout the night there were no signs of violence or conflict, just people chanting “Not my president,” “My body, my choice,” and “Donald Trump, go away, racist, sexist, anti-gay.” Even some of the people who were stranded in their cars did not appear upset, but instead honked, cheered, and high-fived strangers through their car windows. The protests were massive, and all of the protestors united in their distrust and disapproval of a Trump presidency.

Protesting is democracy too. It shows those who feel marginalized that they are not alone. That’s important. #TrumpProtest

The beautiful thing about Wednesday’s spontaneous demonstration was the diversity. More and more people joined from the sidewalks as they saw what was going on. People of all different skin colors, religions, and personalities. What they had in common was that most were young and all were disappointed with the election results.

According to preliminary exit poll numbers from CNN, Hillary Clinton won 54 percent of voters aged 18-29 on Tuesday night. But those margins indicate that she failed to spur young voters to turn out at a sufficient rate to win, a problem that she has had since the primary. In fact, in the primaries, her challenger Bernie Sanders earned nearly 30 percent more votes from Americans under the age of 30 than both Donald Trump and Hillary Clinton combined. Many of those voters now feel hopeless.

CNN reports that similar protests went on in Chicago, Philadelphia, Boston, Seattle, Portland, Austin, San Francisco, Los Angeles, and Oakland. Also on Wednesday evening, a candlelight vigil for Clinton supporters was held in front of the White House. Organizers said about 2,600 watched online as supporters called out, “you are not alone.”

Trump supporters and conservatives expressed disgust at the protests on social media, saying that Democrats don’t respect democracy and only protest if they don’t get their way.

But peaceful protesting and freedom of expression is also a part of democracy.

People are terrified for their safety and futures.

This video shows just how many people were on the streets in Manhattan:

Filmmaker Michael Moore happened to come across the demonstration in his cab and got out to join it. “We had all those big protests before the Iraq War and once the war started, everyone stopped protesting. […] This time, we keep it up and we don’t stop till he’s out of there,” he said to the Huffington post.

Michael Moore happened upon the protest tonight, calling for resistance and agitation. pic.twitter.com/LFiGaO1wfy

Emma Von Zeipel
Emma Von Zeipel is a staff writer at Law Street Media. She is originally from one of the islands of Stockholm, Sweden. After working for Democratic Voice of Burma in Thailand, she ended up in New York City. She has a BA in journalism from Stockholm University and is passionate about human rights, good books, horses, and European chocolate. Contact Emma at EVonZeipel@LawStreetMedia.com.
Share:
Related Items2016 ElectionDemocracyDemocratsDemonstrationDonald TrumpNew YorkNotMyPresidentProtestRepublicansTrump