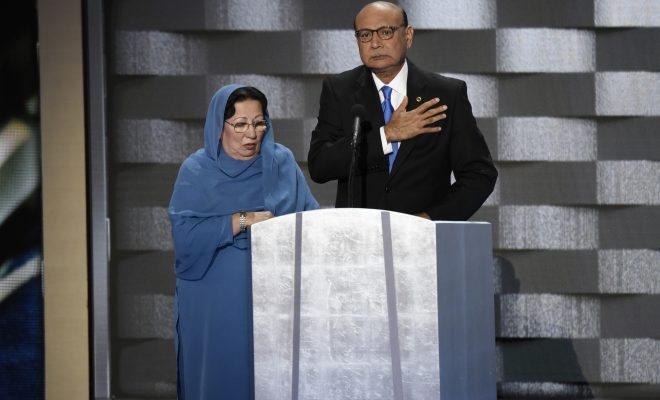 Are the Parents of a Fallen Muslim Soldier Trump’s Biggest Threat?

Last week’s Democratic National Convention was a star-studded parade of the party’s top figures. President Barack Obama, First Lady Michelle Obama, President Bill Clinton, Sen. Bernie Sanders, and an array of Hollywood celebrities delivered speeches. And of course, Hillary Clinton officially accepted the Democratic nomination for president, which gave the media much to talk about. While those speeches produced many notable moments, it appears that the speech that has reverberated the most in the days following the convention is that of Khizr Khan, the father of a fallen American Muslim soldier.

Mr. Khan, with wife Ghazala Khan at his side, criticized Trump for his Islamophobic and xenophobic rhetoric, and drew special attention for the moment he pulled out his copy of the Constitution and directly challenged Trump, saying, “Let me ask you: have you even read the United States Constitution? I will gladly lend you my copy.”

He followed up by declaring, “You have sacrificed nothing, and no one.”

These criticisms have proven to have had a powerful impact, one that the Trump campaign has been unable to effectively combat. When asked about his reaction to the speech by ABC’s George Stephanopoulos, Trump said that Khan “probably looked like a nice guy” but followed by saying, “If you look at his wife, she was standing there. She had nothing to say. She probably–maybe she wasn’t allowed to have anything to say. You tell me.”

I was viciously attacked by Mr. Khan at the Democratic Convention. Am I not allowed to respond? Hillary voted for the Iraq war, not me!

The backlash against Trump’s comments was immediate. In an MSNBC interview, Mrs. Khan explained that she chose not to speak because she would not be able to keep her composure, due to her immense grief. In that same interview, Mr. Khan called his wife his “coach,” and said that he was “strengthened by her presence.” Mrs. Khan then went on to publish an op-ed in The Washington Post, where she refuted Trump’s claims and discussed her son’s sacrifices for his country.

The Khans’ son, Capt. Humayun Khan, was killed in 2004 at age 27 in Iraq after stepping into the line of fire to save his colleagues from a suicide bomb. His sacrifice reportedly saved over 100 of his fellow soldiers from death.

The speech has provoked a large public response. Major figures in the Republican Party, such as Paul Ryan, Mitch McConnell, and John McCain, have strongly condemned Trump’s comments. The presidential candidate has also drawn ire from veterans’ groups and other Gold Star families.

On Twitter, #TrumpSacrifices hashtag used Khan’s comment to mock Trump’s (lack of) sacrifices for his country. Another hashtag, #CanYouHearUsNow, attacked Trump’s insinuation that Muslim women were not allowed to speak.

.@realDonaldTrump This is me, giving a talk at @Georgetown. Do I look oppressed to you? #CanYouHearUsNow pic.twitter.com/NVVMJDbnlJ

Today we raise our voices for Muslim women around the world who empower their community #LLSP2016 #CanYouHearUsNow pic.twitter.com/n6bId5Usjj

Khizr Khan’s DNC speech, and the response that has followed it, has been able to do what no one has seemingly been able to do: make Trump seem vulnerable. Last December, Trump made the comment that he could “stand in the middle of Fifth Avenue and shoot somebody and not lose any voters.” And so far, it has seemed to be true, as he has gotten away with attacking nearly every group–Muslims, African-Americans, immigrants, Mexicans, women–and yet has still been able to maintain his base of support. This unwavering support has allowed him to make flat-out false statements and be blatantly hypocritical and offensive, without fear of repercussions.

This time, however, Trump’s insensitive remarks toward a Gold Star family, and inability to take any criticism aimed against him, have brought him into a battle he cannot win. By directly challenging Trump, a Muslim immigrant man might be Trump’s most forceful opponent so far.

Mariam Jaffery
Mariam was an Executive Assistant at Law Street Media and a native of Northern Virginia. She has a B.A. in International Affairs with a minor in Business Administration from George Washington University. Contact Mariam at mjaffery@lawstreetmedia.com.
Share:
Related ItemsDemocratic National ConventionDNCDonald TrumpHillary ClintonKhizr KhanTrumpVeterans