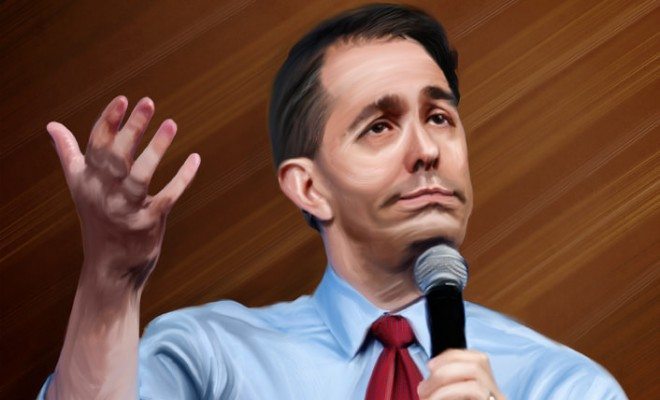 Why Did Scott Walker Really Drop Out of the Presidential Race?

Last week, Governor Scott Walker became the first candidate to drop out of the running for the Republican presidential nomination. His departure from the primaries has led to a wide range of reactions, from utter shock, to great relief, to unoriginal jokes. No matter your opinion on this small town Colorado native turned runner up student government president turned college dropout, there is no doubt that he was a solid candidate. An exciting one? No, but a solid one. His position on some of the most important issues to Republican primary voters were almost uniformly in line. He held tenure for three terms as governor in a swing state while only being recalled one little time. Moreover, his position on the core issue of this recall, bargaining rights for public unions, made him a conservative hero, and thrust him onto the national stage. Perhaps most importantly, Walker rides Harley Davidson motorcycles and is a good Midwestern Christian. So how did this walking, talking embodiment of rice cakes become the quickest failed campaign in modern politics?

Well, people watched him talk. If you were to describe Scott Walker as a candidate, he would appear to be one of the strongest candidates. Unfortunately, as we watched him drowned out by bigger voices in two straight debates, it was hard to see such strengths. The constant coverage of these two debates ensures that voters do not forget about his dismal performances. Due to the incredibly long span of time in which primaries are held, candidates must hold on to the excitement and support that they originally garnered. Just ask Hillary Clinton about how hard that is.

In addition to their length, primary campaigns require millions of dollars, which means many devoted supporters and maybe a billionaire donor here and there. In any other election season, with these issues still remaining, Scott Walker would be a candidate who sticks around until the end of the primaries. Unfortunately for him, this election’s primary voters have no interest in a run-of-the-mill establishment governor. This is a group of voters who have dealt with eight years of a wildly liberal Obama administration intent on limiting religious liberty, weakening America’s stance in the world, and involving government in every facet of our lives. Or at least that’s what many primary voters feel has been the case. Changing the course of this country would require someone who is willing to think outside the box and speak his mind. Scott Walker didn’t seem to fit the bill for those voters.

Scott Walker’s exit from the Republican primaries is a case study in everything wrong with American politics. In the age of a 24-hour news cycle intent on telling its viewers who is winning at every moment in primaries that run for over a year, require millions of dollars in funding, and are decided by radical primary voters who reward borderline racist and Islamophobic speech with huge campaign donations and poll boosts, solid candidates become unelectable. And that is how a candidate who was originally the front-runner at his announcement abruptly spiraled into dismal poll numbers and eventually dropped out. Here’s to hoping Scott Walker finds more success as a bedtime audio book narrator. Or maybe a NyQuil spokesperson.

Maurin Mwombela
Maurin Mwombela is a member of the University of Pennsylvania class of 2017 and was a Law Street Media Fellow for the Summer 2015. He now blogs for Law Street, focusing on politics. Contact Maurin at staff@LawStreetMedia.com.
Share:
Related Items2016 ElectionDrop OutPrimariesRepublicanRepublican PrimariesScott WalkerWalkerWisconsin