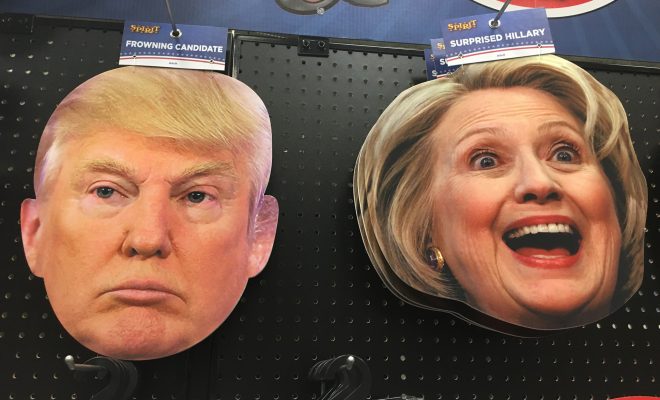 November 8 looms over America, and as the days tick away and the leaves turn brown, the nation’s focus is squarely on two people: Hillary Clinton and Donald Trump. Both the Democratic and Republican presidential candidates had their time in the spotlight during Monday’s first of four debates (one will be between the two VP picks) leading up to November. At times on Monday, the two butted heads on issues from tax returns to Obama’s birthplace to the Iraq War. Here are the top five most contentious exchanges from Monday night:

About 30 minutes in, Holt asked Trump about his tax returns. For a few bumbling, nearly nonsensical minutes, Trump pointed to an IRS audit as to why he has withheld his returns. He also said: “When Secretary Clinton releases her 33,000 deleted emails, I’ll release my tax returns.”

Clinton and Holt both prodded Trump–Holt said the IRS audit does not prevent Trump from releasing his tax returns–who continued to “bait and switch,” in the words of Clinton. The audience cheered at his admonishing of her private email server. For the next few minutes, Trump’s tax returns and Clinton’s deleted emails left the two red-faced and hoarse.

At the beginning of the evening’s discussion, trade, a rising, contentious issue, cropped up. Trump thrashed NAFTA, the Atlantic trade pact supported by former President Bill Clinton, as “the worst trade deal ever negotiated.”

This is not a new stance, but the first direct discussion between Trump, who has spent the past months bashing trade deals as they currently stand, and Clinton, whose husband supported NAFTA and who herself has previously expressed support for trade deals such as TPP, on the trade issue. Things got heated fast: Trump trashed NAFTA as a job killer. Clinton defended it. Trump said she once called the TPP the “gold standard” of trade deals, which she did. Clinton said she said that before the deal took its final form.

It’s an issue that hogged the headlines and the airwaves for the past few weeks: the “birther” claim. Trump finally admitted, to the nation, that Obama was in fact born in America. His admission followed years of rumor-mongering that Obama was born elsewhere. Many viewed it as a racist tactic meant to boost his political profile.

An hour or so into Monday’s debate, Holt brought up the issue. Trump deflected, birthing the birther issue to Clinton, whose campaign, he said, dispatched a reporter to Kenya to dig up details on Obama’s true birthplace in 2008. Clinton didn’t quite respond to that claim, instead drudging up the 1973 lawsuit against Trump and his racist rental policies. Trump of course defended them and said the lawsuit ended without an admission of guilt.

During an interview with Howard Stern in 2002, Trump, in response to a question about whether he supported the impending Iraq invasion, said: “Yeah, I guess so.” That, his critics say, amounts to explicit support of the invasion, even though his political career was 13 years from beginning at that time. Either way, his stance on the Iraq vote, and Clinton’s vote in support of it when she was Senator of New York, has been a contentious issue all year.

On Monday, Holt asked Trump about his Stern interview.

“That is mainstream media nonsense put out by her because the best person in her campaign is the mainstream media,” Trump said. He mentioned arguments he had at the time with Sean Hannity, who he said supported the Iraq War, while Trump did not. “The record shows otherwise,” Holt replied. Clinton stood by, smiling and nodding.

“Trumped Up, Trickle Down”

After Trump described pieces of his economic vision, which include tax cuts from 35 to 15 percent for “big businesses and middle businesses and small businesses,” Clinton called his plans “trumped up, trickle down.” It’s an extreme revival of Ronald Reagan’s trickle down economic policy, Clinton said, using an oft-used pun with his surname to color that point.

When Clinton mentioned her “broad based,” approach to economic growth, Trump responded: “All talk, no action. Sounds good, doesn’t work. Our country is suffering.”