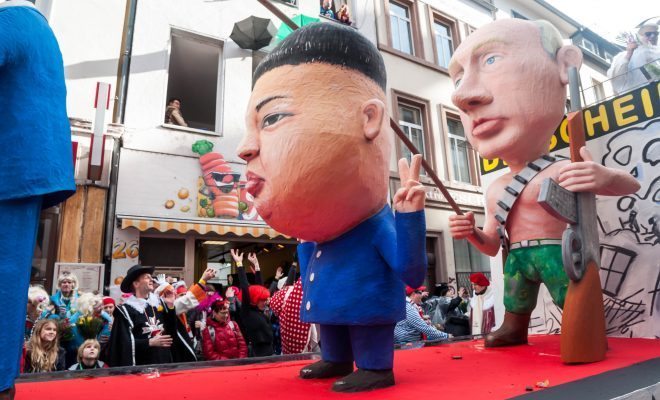 A DPRK Today editorial published Tuesday complimented the businessman, calling him a “wise politician” and a “far-sighted candidate” who will be instrumental in reuniting the Korean Peninsula.

Trump, “the Dennis Rodman of American politics,” gets a critical North Korean endorsement. Should I laugh or cry? https://t.co/6d1RzNI4gR

The editorial referenced foreign policy proposals Trump discussed during a speech regarding U.S. troops in South Korea. Trump floated the idea of withdrawing troops from Japan and South Korea if those nations do not provide more compensation to pay for the costs of housing and feeding U.S. troops.

The editorial also urged Americans not to vote for Hillary Clinton. Han discussed the idea of Seoul cutting off payments to the U.S. in order to urge troops to move out of the country. “The president that U.S. citizens must vote for is not that dull Hillary–who claimed to adapt the Iranian model to resolve nuclear issues on the Korean Peninsula–but Trump, who spoke of holding direct conversation with North Korea,” Han said.

Some have seen the back and forth between the two as propaganda, and just a stunt to help Trump gain more traction.

“He’s the Dennis Rodman of American politics — quirky, flamboyant, risk-taking. At the moment he’s also an outsider,” John Feffer, director of Foreign Policy In Focus, told NK News. “But Pyongyang is hoping that either he’ll be elected (and follows through on his pledges) or that his pronouncements will change the political game in the United States and influence how the Democratic party and mainstream Republicans view Korean issues.”

In an interview with Reuters in May, Trump suggested that if elected president, he would be willing to negotiate directly with the North Korean dictator. However, the North Korean leader declined the invitation.

It is time we all start accepting the real possibility of Dennis Rodman as Trump’s Sec. of State https://t.co/ixpJGbkY5R

Maybe next we will be hearing from Bashar al-Assad or Fidel Castro for a Trump endorsement, because it really feels like anything can happen at this point.

Julia Bryant
Julia Bryant is an Editorial Senior Fellow at Law Street from Howard County, Maryland. She is a junior at the University of Maryland, College Park, pursuing a Bachelor’s degree in Journalism and Economics. You can contact Julia at JBryant@LawStreetMedia.com.
Share:
Related ItemsDonald TrumpDPRKEndorsementsKim Jong-UnNorth KoreaPutinTrump