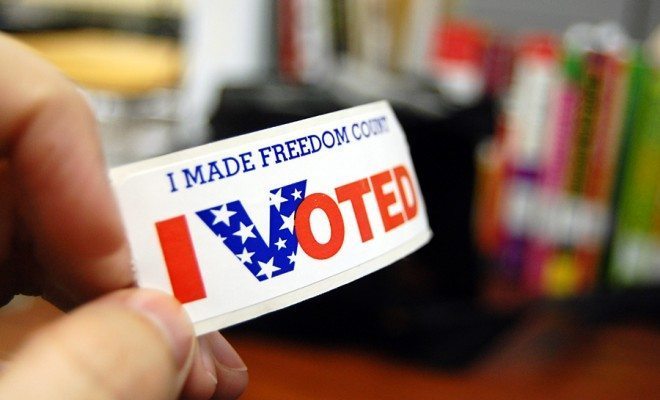 Why Millennials Need to Vote in the Presidential Election

As a journalism student, especially one interested in politics, I am constantly surrounded by election news, so I pride myself on being educated and informed on all of the presidential candidates. So, something that really strikes a chord with me is when people my age (college-aged) tell me that they are going to refrain from voting.

Obviously, my first question is “why?”

I recently saw the post and video below on my Facebook timeline. It got me thinking that I know an awful lot of people who complain about politicians, “the system,” and everything going on in this campaign who have told me that they are simply not going to vote.

It is no surprise that voters ages 18-24 rarely make it out to the polls. According to a Census Bureau Report, in the 2012 presidential election 38 percent of eligible 18-24-year-olds actually voted.  To put that in perspective, approximately 61.8 percent of all eligible Americans voted. Seem low? It is. The least represented group at the polls is 18-24-year-olds.

In the 2012 election, 69.7 percent of eligible voters aged 65 and over voted. Now, I know we all have that aunt or uncle whose views are too radical to even listen to at the dinner table at family gatherings…so why give their voice more validity and weight if you have a chance to be a part of a different opinion?

The difference between the voting rate of young people aged 18-29 and their eligibility rate was -5.8 percent. Voting is a civic duty, and by not voting we are only distancing ourselves from a government that we want because we don’t allow our voices to be heard.

Tomorrow is the Missouri Primary! Polls across the state will be open from 6AM-7PM #Election2016 pic.twitter.com/pOrE39qS5s

Here are some of the most common explanations young eligible voters have for not voting:

“I hate all of the candidates.”

I hear this often as a reason not to vote. My response: if you hate all of the candidates so much, do something about it! Don’t just complain on Twitter, go out and vote and make your voice heard. Write-in, vote for third-party candidates, do something! Because at least you can say that you had a part in the process.

I know people who hate the Maryland governor but didn’t feel like voting in the gubernatorial election against him. There’s no use in complaining now if you didn’t even feel like being a part of the process in the first place.

In the 2014 election (midterm), a sad 36 percent of eligible voters actually turned out to vote (which isn’t completely unusual for midterm, but lower than previous years), according to the U.S. Census Bureau cited in The Washington Post. Of the voters who didn’t hit the polls, 28 percent said they were just ‘”too busy.”

“I’m just not that into politics” or “I don’t know much about the candidates.”

This is another popular reason I hear. But you can be “not into politics,” while still keeping yourself informed. I know plenty of students who despise politics, yet keep up on the race because they know it is important to know what is going on. You don’t have to read every single article about the candidates or even keep up on the immediate news to check up every once in a while to see where the candidates stand and what they have been saying. Simple Google searches will take you to the stances of every candidate.

Obviously, not all political quizzes were made equal, but ISideWith isn’t too bad if you want to get a feel for who you may share views with.

“My vote doesn’t even count for much, who cares?”

This is probably my least favorite excuse not to vote. Most frustrating is that there are a lot of people who truly don’t believe their vote counts. Whether that be because of the way our system is set up, or just a misconception about how powerful a vote is, it isn’t a good way to think about voting. A lot of people feel this way, which means a lot of people will not vote purely because they think they don’t have any stake in who becomes president. While the impact of a single vote may not seem like much, the impact of many single votes not being casted adds up. A silent majority is still a majority, just not one whose opinion counts when it matters most.

Oh, okay, yeah, don’t worry about even heading out to the polls then.

Julia Bryant
Julia Bryant is an Editorial Senior Fellow at Law Street from Howard County, Maryland. She is a junior at the University of Maryland, College Park, pursuing a Bachelor’s degree in Journalism and Economics. You can contact Julia at JBryant@LawStreetMedia.com.
Share:
Related ItemsMillennialsPresidential ElectionVoteVoter TurnoutVoting