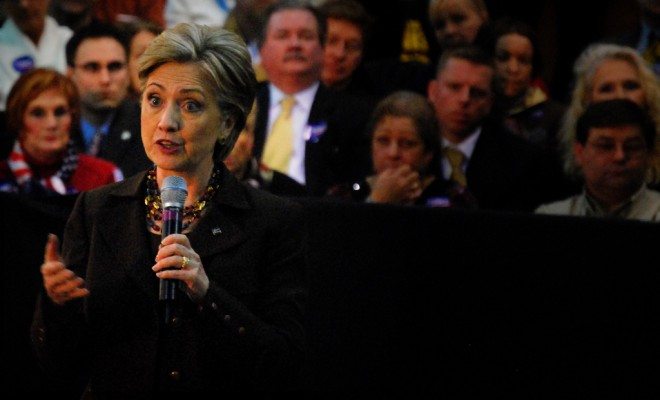 Hillary’s In, But Who Will She Run With?

It’s official–Hillary Clinton will be the Democratic nominee for president. For weeks, any other legitimate potential Democratic challengers have been backing away very quickly from a nomination consideration. Honestly, with the way this race is probably going to go we might as well just have the convention right now, because Hills is definitely sitting pretty.

So now we turn our eyes to the much more interesting and significantly less important race on the Democratic side–who will be Hillary Clinton’s Vice Presidential nominee?

Given that everyone is still freaking out over her announcement, it’s probably best to let the dust settle before coming up with any concrete answer. But that doesn’t mean we can’t have some fun speculating in the meantime.

Speculation about who Clinton may pick includes a lot of mid-to-high-level players in the Democratic Party. Both sitting Virginia senators, Tim Kaine and Mark Warner, might be legitimate choices, as they are from a crucial swing state. Martin O’Malley, Governor of Maryland, and long considered a potential contender to fight Clinton for the nomination, could also make a strong partner.

Julian Castro, the Housing and Urban Development Secretary and former mayor of San Antonio, could also be a tempting second in command. While Texas isn’t purple yet, it may be relatively soon, and capitalizing on that in advance could be a smart overall strategy for the Democratic Party. Castro is Hispanic, a voting bloc that has become a priority to win for both the Democrat and Republican tickets. Furthermore, Castro is 40 years old–30 years Clinton’s junior. In addition to balancing out her perspective, Castro will look young and virile standing next to Clinton, and assuage those who have concerns about her health.

There are also questions over whether Clinton would only limit the search to men. There are a lot of female rising stars in the Democratic Party, including Elizabeth Warren, the popular senator from Massachusetts. She has said she’s not planning on running, despite the fact that she’d presumably have quite a bit of grassroots support if she chose to. More liberal than Clinton in many ways, including on financial issues and ties to Wall Street, she could energize young liberals who are still hurting from the 2008 recession.

Also from the ranks of Democratic women there’s been talk of Senator Kirsten Gillibrand (D-N). That one seems like a long shot though, despite the fact that Gillibrand took over Clinton’s seat when she vacated it to become Secretary of State. She’s gone after some big, important issues in her time in the Senate, such as sexual assault in the military; however, in addition to the fact that Clinton and Gillibrand are seen as somewhat similar, there are concerns over whether a ticket with two people from the same state could even work. The 12th Amendment effectively prohibits that both the President and Vice President be from the same state, but exactly what that means is somewhat difficult to parse out. Clinton and Gillibrand both served as Senators from New York, but does that make them “from” the same state? That would be an issue that would have to be decided, but the idea that she chooses Gillibrand is unlikely to begin with. It could however, impact any other possible VPs from New York, including Governor Andrew Cuomo.

There are plenty of other names for consideration on this list. There’s also Senator Amy Klobuchar from Minnesota. She was an attorney with a strong record on crime and safety before being elected to the Senate. Senator Cory Booker is another rising star, particularly after his much-respected time as mayor of Newark, New Jersey. Former Governor of Massachusetts Deval Patrick has been brought up, and even though he says he’s not interested, that was over a year ago, and he may change his mind.

No matter who Clinton picks, she’s got a solid list from which to choose. As the Republican Party contenders spend the next few months tearing each other down, she’s got time to groom a running mate and solidify her base.