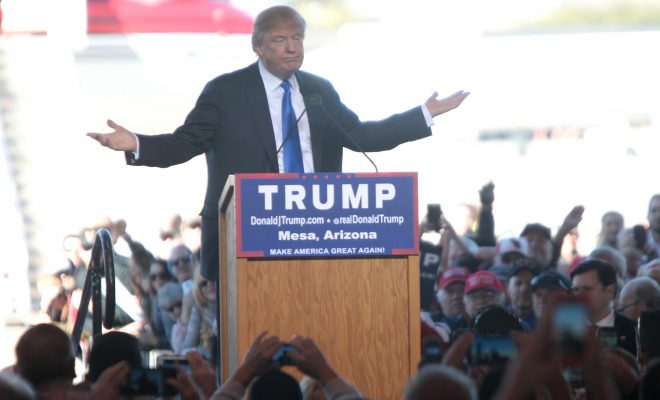 Despite his transition into the White House, President-elect Donald Trump took time out of his day on Sunday to rehash the election results, going so far as to claim that millions of votes were cast illegally. He made the claim without citing evidence and despite an apparent consensus among election monitors that there was no indication of widespread voter fraud.

President-elect Trump’s comments came as popular vote counts began showing Hillary Clinton’s sizable lead in the popular vote. While Clinton lost the electoral college and the election as a result, it looks likely that she will have a popular vote lead of somewhere between 2.5 to 2.7 million votes, or about 2 percent of all votes cast. This appears to have troubled the president-elect, leading to his claim that enough votes were illegally cast to lose the popular vote.

In addition to winning the Electoral College in a landslide, I won the popular vote if you deduct the millions of people who voted illegally

This unprecedented attack on the legitimacy of the same process that elected him president surprised many, particularly because earlier in the day, Trump sent out a series of tweets denouncing the recount effort organized by Green Party candidate Jill Stein. On Saturday, Trump tweeted that the recount effort was a scam.

Last week Stein began raising money to fund a recount in multiple key states, and on Friday, announced that she initiated the recount process in Wisconsin. The Clinton campaign said that it would join in the recount effort, although a lawyer for the campaign indicated that he did not expect the process to change the final outcome. However, that appears to have been enough to upset Trump, who went on to criticize Clinton in several tweets. Trump cited Clinton’s concession speech and statements made during the presidential debates to indicate that she was hypocritically challenging the election after criticizing him for doing the same thing during the campaign.

Just a few hours later, Trump claimed that millions of votes were cast illegally and then alleged that voter fraud occurred in several states. He also claimed that if the popular vote determined the outcome of the election he would have campaigned differently and won that as well.

states instead of the 15 states that I visited. I would have won even more easily and convincingly (but smaller states are forgotten)!

Serious voter fraud in Virginia, New Hampshire and California – so why isn’t the media reporting on this? Serious bias – big problem!

Glenn Kessler, the fact-checker at the Washington Post, quickly refuted Trump’s claims and gave his statement a “four-Pinocchio” rating, which is reserved for particularly brazen and false claims. While the exact source of Trump’s statements remains unknown, the claim that millions of non-citizens voted illegally has been making its way around some right-wing media sites.

One of the most notable examples of this argument came from the conspiracy website Infowars, which cited a Twitter user and self-described voter fraud expert who made claims about fraud before election data was even available. The site Infowars is run by Alex Jones, a well-known conspiracy theorist who, among other things, seems to believe that no one died in the 2012 shooting at Sandy Hook Elementary School in Newtown, Connecticut. During the campaign, Jones had Trump on his radio show and after the election, he claimed that Trump called to thank him for his support.

Based on all available evidence, claims of widespread voter fraud are false. Trump’s statements have been criticized by independent monitors and election officials alike. California Secretary of State Alex Padilla said in a statement on Sunday:

It appears that Mr. Trump is troubled by the fact that a growing majority of Americans did not vote for him… His unsubstantiated allegations of voter fraud in California and elsewhere are absurd. His reckless tweets are inappropriate and unbecoming of a President-elect.

ProPublica, a nonprofit investigative news outlet that coordinated a massive effort to monitor the election across the country, also refuted the claim in a series of tweets.

We had 1,100 people monitoring the vote on Election Day. We saw no evidence the election was “rigged” no matter what Stein or Trump say. /1

Whether Trump genuinely believes that millions of illegal votes were cast or, as many critics speculate, whether he was using his tweets to distract from other potentially damaging reports–such as the conflicts of interest that Trump will face once in the White House–remains to be seen. However, given that the president-elect has openly challenged the legitimacy of the election, it’s possible that his comments may lead to further calls for recounts.