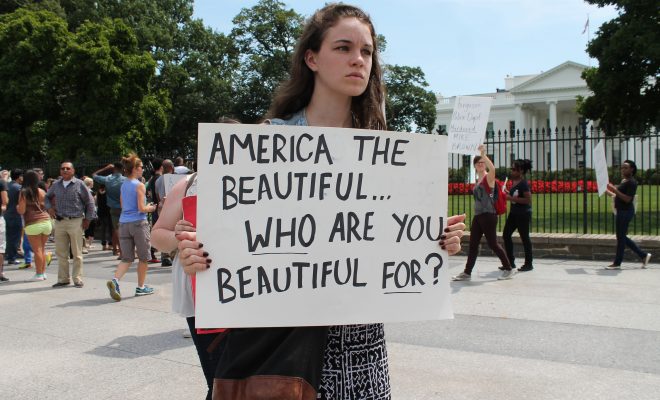 College Campuses React to the 2016 Election with Protests and Anger

All across the country, students on college campuses protested the election results, which declared Donald Trump the next President of the United States.

Young voters (18-29 years old) voted 55 percent to 37 percent in favor of Democratic Candidate Hillary Clinton. But for voters 65 and over, Trump held the majority of the votes.

With numbers like those it is easy to see how many college students could be unhappy with the way the election went. Students around the country, including many on the West Coast (likely due to the time difference), poured into the streets crying, shouting, and marching against the president-elect.

Students could be heard screaming “F— Donald Trump,” as mobs marched arm in arm through campuses, trying to make some sort of sense out of what had happened. Here are a few examples of protests from college campuses around the country:

UCSB and SBCC students marching to Storke Tower in a peaceful protest in regards to the election results. 11-9-2016/2:04 AM. #NotMyPresident pic.twitter.com/G3sF40bnQh

Sorry that these are getting repetitive. This is a huge, growing group of students. #UCLA pic.twitter.com/dxfOp8QerY

These are all different UC’s reacting to the Presidential Election.The revolution has started. #ucsc #ucla #usb #ucd pic.twitter.com/Au4SPFN2DJ

Students at UPitt could be heard chanting, “No KKK no fascist USA! No Trump!” and “Whose streets?” “OUR streets!” Along with “Not my president!”

Students from the University of Oregon marched through Eugene to protest America’s new president #LifeAsAJStudent pic.twitter.com/kQU97Sdv2i

Students in Washington D.C. went to The White House to protest.

At different universities, it has been reported that professors have cancelled exams and assignments Wednesday, after students expressed their grief over the outcome of the 2016 election.

Julia Bryant
Julia Bryant is an Editorial Senior Fellow at Law Street from Howard County, Maryland. She is a junior at the University of Maryland, College Park, pursuing a Bachelor’s degree in Journalism and Economics. You can contact Julia at JBryant@LawStreetMedia.com.
Share:
Related ItemsClintonCollege CampusesElectionNotMyPresidentProtestTrump