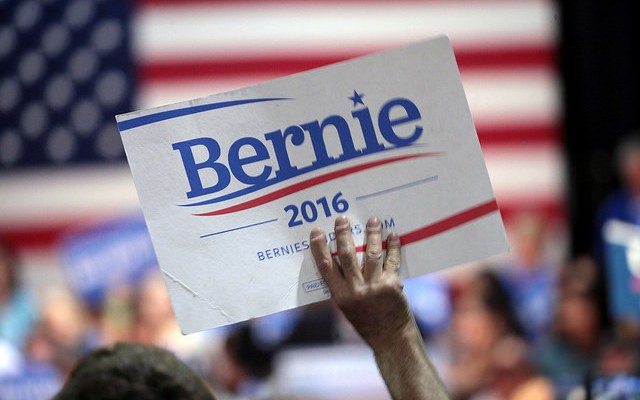 #BernieMadeMeWhite Calls Out the Media Whitewashing of Sanders’ Supporters

There’s no denying the fact that Hillary Clinton is dominating the Democratic primaries. That said, underdog Bernie Sanders hasn’t let the presidential primary race turn into a runaway. On Saturday, Sanders nabbed sweeping victories in the caucus states of Washington, Alaska, and Hawaii, giving him a nice bump in electoral delegates.

In response to the wins, CNN credited the Vermont Senator’s success to a tendency to do well in “largely white and rural” states, warning that in order for Sanders’ to win he needs to “replicate this success in other, more ethnically diverse states that hold primaries.”

That description didn’t sit well with some of Sanders’ minority supporters.

Leslie Lee III, a writer in English teacher from Baton Rouge, Louisiana currently living in Yokahama, Japan, responded to the stereotype with some sarcasm. Lee jokes,

And just like that the hashtag #BernieMadeMeWhite was born!

It didn’t take long for other minority Sanders’ supporters to jump on the hashtag’s bandwagon.

.@tokyovampires ever since I voted for Bernie I traded in my Timbs for Vans. #BernieMadeMeWhite

Then it sort of just spiraled out from there.

Ever since I voted for Bernie I deny racism and wear shorts in February. The media was right. #Berniemademewhite #FeelTheBern

#MSM But how can Bernie win Hawaii with only young white men supporters? Check out #BernieMadeMeWhite for obvious answer. #FeelTheBern

#BernieMadeMeWhite Ever since I started to #FeelTheBern, I only dance like this pic.twitter.com/synwO93Xct

Ever since I started supporting Bernie I suddenly lost my rhythm. #BernieMadeMeWhite

Will someone please show me how to do my hair? It’s all so confusing since #BernieMadeMeWhite pic.twitter.com/rDI5QFoxiQ

#BernieMadeMeWhite and now I am looking to move out of this neighborhood, you know, cause of the property values, of course.

Finally I have white privilege.#BernieMadeMeWhite

I’m so thankful that #BernieMadeMeWhite.

Can we stop worrying about racial profiling and hate crimes now? pic.twitter.com/NqE1zD5bSz

#BernieMadeMeWhite We are not invisible despite the media propaganda machine would have you believe pic.twitter.com/qGeuBKm2zD

#BernieMadeMeWhite & male so I don’t have to worry about maternal healthcare, paid family leave, or gender pay gap. pic.twitter.com/QXO48QiKtB

This isn’t a picture of two friends, it’s actually a before and after voting for Bernie pic. #BernieMadeMeWhite pic.twitter.com/lHH9QJvTfB

The moral of the story is that Sanders’ supporters really don’t like being generalized, because white males aren’t the only demographic “feeling the Bern.” Don’t get me wrong, Sanders still has a long way to go. His campaign has struggled to secure the black and latino vote, which has repeatedly propelled Clinton to victory. With three more months still remaining in the primary race, he’ll need to rally more support among all demographics if he hopes to secure the nomination.

Alexis Evans
Alexis Evans is an Assistant Editor at Law Street and a Buckeye State native. She has a Bachelor’s Degree in Journalism and a minor in Business from Ohio University. Contact Alexis at aevans@LawStreetMedia.com.
Share:
Related Items#BernieMadeMeWhiteAlaskaBernie SandersHashtagHawaiiHillary ClintonPrimary SeasonTrendingTwitterWashington