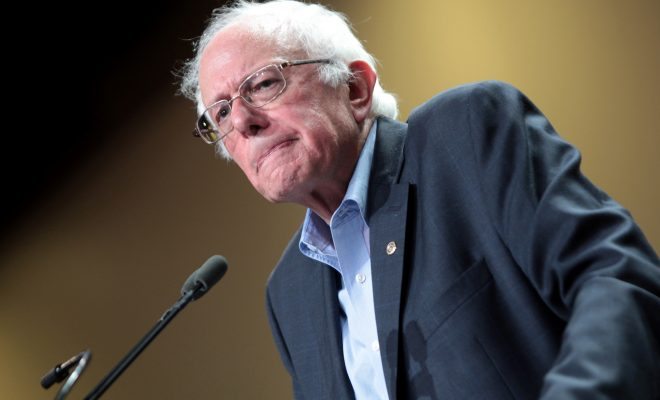 Should Bernie Sanders Stay in the Race?

On Tuesday, Hillary Clinton made history and secured the amount of delegates necessary to be the Democratic nominee. But while she celebrated her win, Vermont Senator Bernie Sanders vowed to continue his fight for the White House.

And Sanders’ subsequent comments are a bit of a shame. While there are some positives to him continuing in the race, there are also some very powerful negatives.

First off, I think it is important to note that Sanders is playing a game that he is familiar with: while yes, he is an Independent, he has been in politics for almost four decades. When votes started going Clinton’s way, he claimed that the election was rigged and riled up his supporters over the notion that the system was out to exterminate him. He talked about superdelegates like they had never existed in previous primaries, and complained that they are undemocratic–while now saying that he is going to win the nomination by flipping superdelegates–something that he has yet to accomplish.

In addition, it is troubling that Sanders, who hails himself as a revolutionary, ignored the fact that Clinton had just made history as the first woman to receive a major party nomination, stubbornly refusing to even bring it up during his speech Tuesday night.

When the Associated Press announced that Clinton had enough delegates to clinch the nomination, anger poured onto social media from Sanders’ supporters who felt that once again, everything was against them–even basic math. His supporters called out that this announcement was a breach of journalistic integrity…because how dare the AP do the research and talk to every superdelegate (who according to Sanders supporters, apparently don’t even count at this point)? The superdelegates will be decided in July, they wrote, adding that there is so much time for the superdelegates to flip and that the AP was just in the pockets of the establishment.

@AP_Interactive @AP STOP REPORTING FALSE FACTS. You should be ashamed of the reporting you’re doing. Superdelegates don’t count until July.

Some of these people probably supported the superdelegate situation in 2012 when now-President Barack Obama was in the same position, and Clinton had conceded. That race was closer mathematically than this one.

The AP ultimately decided to issue a statement regarding the findings, in which the AP sasses the critics who claim the news organization just made everything up–implying that those critics do not understand how the American political system works.

We are at the point in this election where Sanders has the opportunity to do something incredibly influential for his many supporters: show them that sometimes you lose, but you need to get back up and keep fighting in other ways. He can either teach them to fall with grace, or to reject a system that probably isn’t going to be systematically changed anytime soon and stop participating forever.

Vox’s Matthew Yglesias put it well when he said:

Those lessons, clearly visible from Sanders’s own career, are that big change is hard and if you try for it you are likely to lose, but just because you lost is no reason to give up. It’s also no cause to whine about how you’ve been cheated or take refuge in denial that it’s truly over. You need to dust yourself off, move on to the next thing, and try to win more votes in the future.

If Sanders continues to hold onto, and reiterate to his supporters, that he will be able to pull off a miraculous win at the convention, then he is lying to his fanbase. Not only will he find difficulty in persuading Clinton’s superdelegates (who supported her before Tuesday) to switch to his side, but he would also need a whole lot of them to do so in order to make up for his deficit. However, the one thing he does have going for him is that people will listen to him, they will be fired up, and they will believe that he actually can win this–even if it is a far-reaching idea.

People who’ve already emotionally invested themselves in the Sanders campaign — already gone to rallies and argued with uncles and called out corporate media shills on Twitter — are going to be highly predisposed to align themselves with whatever tactical notions Sanders puts out there.

Not to mention that Sanders’ last ditch effort for delegates looks an awful lot like college students around the country scrambling to get an A in a class that they have a C in walking into the final: “Hmm…let’s see…I just need to pull off a 170 percent on the final to get an 89.5 in the class…I can do that!”

Unlike Sanders, however, college students, at some point, concede to their studies and focus on another subject that they know they will get a better grade in.

Julia Bryant
Julia Bryant is an Editorial Senior Fellow at Law Street from Howard County, Maryland. She is a junior at the University of Maryland, College Park, pursuing a Bachelor’s degree in Journalism and Economics. You can contact Julia at JBryant@LawStreetMedia.com.
Share:
Related ItemsAssociated PressBernie SandersDemocratic primaryHillary ClintonSuperdelegates