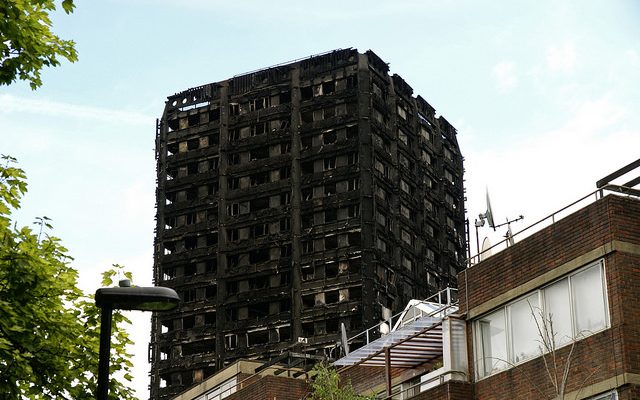 The company that supplied cladding panels for the Grenfell Tower block in West London has ceased sales of its product for use on other high-rises, two weeks after a fire raged through the building, killing at least 79 residents.

Arconic, a U.S.-based aluminum firm, said the fire identified “issues” with the polyethylene core cladding, which it sold to a local distributor for use on the public housing complex. As investigations into the fire’s cause continue, more buildings across London have been revealed to use the same or similar materials.

What Did the Firm Know?

A Reuters report revealed that Arconic officials knew of the material’s flammability, and that a company brochure published in 2016 noted that the panels should not be used for buildings taller than 10 meters. The material is banned elsewhere in Europe and in the U.S.

In a statement to Reuters Arconic said that it had known the panels would be used at Grenfell Tower but that it was “not its role to decide what was or was not compliant with local building regulations.”

Other involved parties, such as those who installed the panels, the tower’s recent refurbishment contractor, and the Royal Borough of Kensington and Chelsea, which the tower block, have yet to talk to the media.

The cladding, Reynobond PE, has a plastic core, which experts say creates a “chimney effect,” shooting an intense heat and fire vertically around the outside of the building. The Grenfell fire was started when a Hotpoint refrigerator positioned against an exterior wall burst into flames and ignited the flammable cladding. Investigators have determined that the fire was not started deliberately.

U.K. officials are currently running tests of cladding samples from buildings across the country to evaluate their fire safety preparedness. So far, 95 towers have failed local fire safety tests, and at least 17 buildings are undergoing removal of the cladding. A Scottish university has ordered repairs to one of its residence halls after finding the material.

Prime Minister Theresa May has called for a thorough investigation into the use of this cladding material on high-rises. Authorities are considering potential manslaughter and criminal charges as the investigation of the fire’s cause continues.

As more fire safety noncompliance instances are discovered, thousands have been evacuated from potentially dangerous buildings. The fire was the country’s deadliest in more than a century.

The Price of Safety

The Grenfell fire and information about the hazardous cladding reveal a disaster that was years in the making. Safety components like sprinklers, fire alarms, and fire escapes were nonexistent in the building, and residents complained for years prior to the blaze that their living conditions were dangerous.

Most of the structures in need of repairs due to flammable cladding are social housing buildings–government or council-owned properties for low-income residents. This is indicative of bigger-picture neglect of the city’s poor.

Kensington, where Grenfell Tower is located, has one of the city’s largest gaps between the affluent and the working class. Monthly rent for private housing costs nearly five times as much as that of social housing, and poor residents in the area say they have felt pushed out by the wealthy community.

Officials and politicians have said that requiring only fire-proof building materials is not economically viable for the government–the cost concerns outweighed the potential risk. The Reynobond PE cladding is cheaper than other cladding produced by Arconic.

Surviving residents of the Grenfell blaze are demanding a say in the logistics of the public inquiry. While unusual, the request appears appropriate to help local authorities regain the trust of residents as protests against the prime minister and other local leaders continue.

Last week, the British government announced in a press release that the first set of new homes for displaced Grenfell residents have been secured. Social housing is also expected to see an increase in funding due to increased political pressure. While it won’t undo the Grenfell tragedy or give much comfort to the families whose loved ones are still missing, a heightened focus on the unsafe living conditions in social housing is a step in the right direction for a government that has turned a blind eye to its poorest residents.