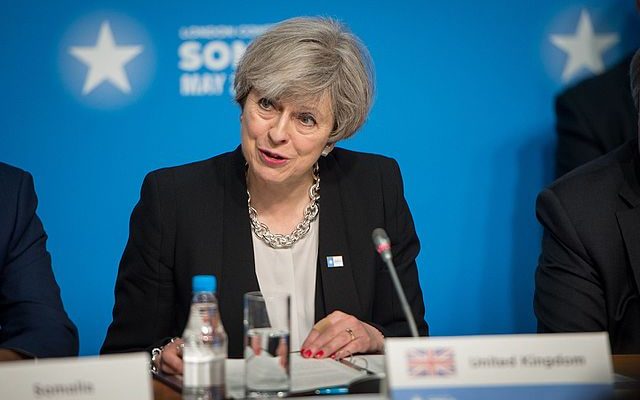 Prime Minister Theresa May addressed activists on Tuesday about where human rights fall on her priorities following Saturday’s attack in London and the Manchester bombing in late May. “And if our human rights laws stop us from [tackling extremism and terrorism], we’ll change the law so we can do it.” she said to a crowd in Berkshire, England.

This statement follows her speech on Sunday in which she presented a four-point plan toward combatting terrorism, and comes only 36 hours before polls open for Britain’s snap election this coming Thursday. Polls show her lead continuously shrinking. May also added that she wants to make it easier to deport foreign terror suspects and monitor the movement of those suspects when there is a fear that they pose a threat but there’s not enough evidence to prosecute them.

While many are familiar with the human rights atrocities Britain has committed in its various roles as a colonial power, violations within its borders may come as a slight surprise to some. But May’s statements become less surprising with some context:

There are two sets of laws that Britain currently abides by: the European Convention of Human Rights and the 1998 Human Rights Act. The former was ratified in 1953 by the then-newly-formed Council of Europe after World War II to prevent anything like Nazi Germany from happening again, protect human rights, and defend “the fundamental freedoms in Europe.” The latter was created so that the rights contained in the ECHR would be incorporated into British law, and human rights breaches could be challenged in domestic courts without having to go to the European Court of Human Rights (ECtHR) in Strasbourg.

Wait, back up. Why do we care about the European Convention of Human Rights? Isn’t Britain leaving the EU?

The ECHR is separate from the EU so Britain doesn’t have to leave if it doesn’t want to. For the time being–it seems like the Conservatives, the current party in power, want to remain in it, according to their manifesto. The decision will be revisited after the next parliament’s term ends. Oddly enough, Conservatives are more concerned with replacing or amending the domestic Human Rights Act as they begin their Brexit.

Makes sense. But if there are two sets of human rights laws, wouldn’t that make it difficult to enact any change?

Despite May’s comments, precedent in the United Kingdom shows that the current “human rights laws” might not even need to be changed in order to accomplish the counter-terrorism policies she laid out (but we’ll get to that later).

Wait, so the UK can violate human rights?

Technically. Britain is allowed to “derogate”–or temporarily ignore–parts of the European Convention of Human Rights in a “time of emergency” that is “threatening the life of the nation” under Article 15 of the agreement. Their particular cup of tea is the suspension of habeas corpus. In 1979, for example, the European Court of Human Rights allowed them to use preventative detention without trial of PIRA terror suspects in Northern Ireland after a string of attacks killed British soldiers.

Today, terror suspects can be held for 14 days without a trial, a decision that was implemented with the Criminal Justice Act of 2003. May has stated that she is looking to revisit that number and seek derogation to extend that period to 28 days, a move that was attempted in 2011 when she was Home Secretary, the UK’s equivalent of a Director of Homeland Security, and when Conservative David Cameron was Prime Minister.

“When we reduced it to 14 days, we actually allowed for legislation to enable it to be at 28 days,” she said in an interview with The Sun. “We said there may be circumstances where it is necessary to do this. I will listen to what they think is necessary for us to do.”

Even doubling the figure seems tame compared to previous attempts to extend the length of uncharged detention. In 2005, Labour Prime Minister Tony Blair attempted to lengthen the period to 90 days following the July 7 attack on London. That time, however, civil rights groups stepped in out of protest and that provision was subsequently dropped.

And even with all of this wiggle room, May wants to change the laws?

Yes. As previously stated, Conservatives don’t really view the Human Rights Act too favorably. Not necessarily in a maniacal way, more in a “we want to make a better version” way. They have wanted to replace the law with a British Bill of Rights for a few years now, and this year is no exception.

May’s comments about changing human rights laws most likely also comes from her suggested plans to expand terrorism prevention and investigation measures, a two-year designation given to terrorism suspects considered to be enough of a threat. The measures currently include overnight curfews of up to 10 hours, electronic tagging, reporting regularly to the police, exclusion from certain zones, enforced relocation, and some limitations on use of mobile phones and the internet.

When you bundle expanding all of that with her Sunday promise to “make sure the police and security services have all the powers they need,” it’s clear why she wants to remove as many legal roadblocks as possible.

What are other people saying about this?

Former director of public prosecutions and Labour shadow Brexit secretary, Sir Keir Starmer, believes that the laws should stay in place as they are because they have not gotten in the way of combatting terrorism and extremism before.

“If we start throwing away our adherence to human rights… we are throwing away the very values at the heart of our democracy,” he said in a BBC Radio 4 Today interview.

Current Labour leader, and the closest political opponent to May in the election, Jeremy Corbyn, lambasted the Prime Minister’s comments and accused her of trying to “protect the public on the cheap,” referencing that fact that she cut nearly 20,000 police officers during her time as Home Secretary.

Liberal Democrat leader Tim Farron took the accusation a step further and said May’s speech about being tough on terror was just a facade.

“In her years as home secretary she was willing to offer up the police for cut after cut,” he said. “We have been here before – a kind of nuclear arms race in terror laws might give the appearance of action, but what the security services lack is not more power, but more resources. And responsibility for that lies squarely with Theresa May.”

Whether or not the British public believes May’s words will be tested in Thursday’s election. Polls show that Conservatives are still leading Labour by about six points, down from almost a double digit vote lead when both campaigns started.

Gabe Fernandez
Gabe is an editorial intern at Law Street. He is a Peruvian-American Senior at the University of Maryland pursuing a double degree in Multiplatform Journalism and Marketing. In his free time, he can be found photographing concerts, running around the city, and supporting Manchester United. Contact Gabe at Staff@LawStreetMedia.com.
Share:
Related ItemsBritainConservativesCounter-TerrorismHuman RightsJeremy CorbynTerrorismTheresa May